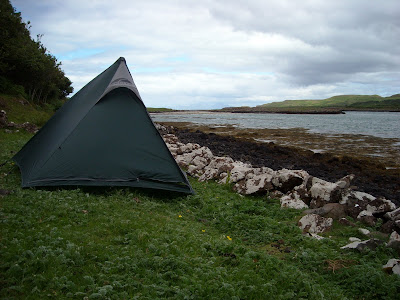 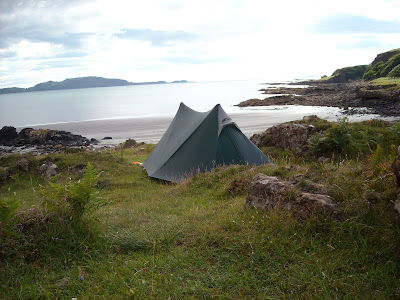 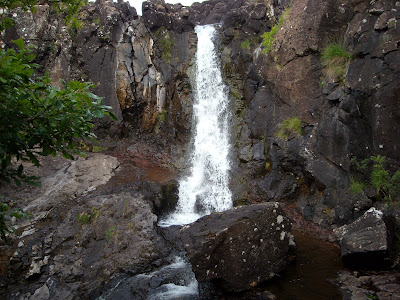 Wednesday 9th July. Camped GR OS Map LR 47 415388.
It was inevitable really, I really had to get away for a few days. Upset by recent avents, it was a case of once more making the long journey north. Some thirteen plus hours of travelling by bus; an overnight stop at a backpackers hostel in Oban and then the ferry across to Mull this morning. Got the local bus up to Salen. From there it was a road walk down to the Ulva ferry. Made the nine miles in just over two hours. So much running through my mind, confusion, anger, hurt. Ok, I am only too well aware my social abilities are poor. It is unfortunate, however, with me it is part of my life, part of the emotional baggage I carry. My whole background is one awful confused mess. Just recently I received a message on the blog, anonymous, (how surprising!), basically the person, after reading through all my blogs finally concluded I was ' one sick b---ard who ought to have been put down at birth', nice! Why though bother to actually go through all my blog material in the first place? A few folk have done that, hence these days I moderate all comments. Always I have been open about myself. Now though, the latest snub. Despite the time and effort I put in to recent events I end up snubbed. Once more I am forced to step apart from folk. All these thoughts, feelings running through my mind as I headed down the road. It has been a hot day and it was not until I got on the ferry across to Ulva that I realised I had been pushing too hard. Felt rather sick which was compounded by a bad headache. Took one of my migraine pills and got some water down me and things eased off a bit. Checked in to the cafe on the island. One has to pay the ferry fare at the counter. Also, if anyone is wild camping, they are asked to sign in. Camping is permitted but people are requested to avoid certain areas. Some places are prime nesting sites. There are several paths on the island, not marked on the OS map, but are signposted. Delightful paths that wind and twist around the shore. Natural woodland/scrub that abounds with yellow wagtails, pied wagtails, blue tits, coal tits linnets and loads of other birds too. This island was once inhabited by some three hundred people. Ruined crofts abound. The last few miles where rather hard going. By following a marked trail around the coast and then coming around by Ormaig added quite a few miles. Again, the OS map is sadly lacking. On the map it is marked as a ruin. In fact, at one time it had been a village. Now sadly crumbling back in to the ground from whence it came. It is a place with a history. Generals and Highland chiefs had been born there, vikings had moored their long boats in the bay below. Now deserted, empty, abandoned. Only visiting yachts making over night stops and a bothy on the beach.

Thursday 10th July. Camped OS map LR47 GR 402455.
Made a late start this morning. Strolled back to cafe, treated myself to a cup of coffee and sat for a moment to admire their large dog. A malamute, a wonderful hairy beasty. it does not bark, just throws it head back and howls, rich, musical, deep and sombre tones. Back on the ferry and a return to Mull. A steady wind kept temperature down. A steady walk up the road and then turned off to where I am camped now. Stopped early, went for a wander over the rocks and small inlets. Have watched a sea eagle over the island opposite, soaring higher and yet higher until I finally lost it in the glare of the afternoon light. Gannets where busy diving and feeding. Small groups of shag too. A pair of greater black back gulls patrolled the shore. Dunlin skittered along the tide line, oyster catchers piped shrill and loud. Out of the sun it is quite chilly. The breeze though is keeping the midges at bay. Went in for a paddle, wading out, gentle waves lapping at the bottom of my shorts. The horizon beckoning, the thought crossing my mind unbidden, 'how tempting just to keep going. Who would ever know!'
Friday 11th July. camped OS Map LR47 GR407537.
Quite a blustery day, cooler too with a few light showers. Enough to make things damp without warranting waterproofs. My original intention had been to walk up to Kilninian Kirk and then follow the path that leads over the hill. Found the start of it ok. it swiftly became faint though and finally vanished. Dense bracken, most of it at around six foot high would have made it difficult going. Decided to give it best and headed around the road. Stopped for a tad to admire a pair of golden eagles. Road walking can be tedious but in fact the road around to Calgary was not that bad. From the church it begins a gradual climb. Slowly, in subtle twists and turns it snakes up the bealach and then descends steadily down to Calgary. The blustery wind matched my mood. Mulling over the recent events, it makes me angry. That is always a problem, I have a lot of anger, some of it directed at myself. Social interaction has always been difficult. One diagnosis (label?) that was tagged on some years back was aspurges syndrome. Over the years I have worked hard to improve on my social capabilities. it seems though I have been wasting my time. For my own good I have decided to miss the Dartmoor meet next week. Things are a bit too screwed at the moment. Calgary bay is a pretty place. A wide, sweeping sandy beach. An obvious honey spot for tourists. There is even an area for car born wild(?) campers to park and pitch, complete with public toilets and a tap. A notice encourages wild campers to act responsibly etc. Following the road around I found the other end of the footpath. Maybe it heads in a slightly different direction than the map indicates. However, the signpost does say it is the path to Kilninian kirk. Checking the map and trying to find a suitable place to stop it was obvious my best bet would be to aim for the coast. There was a track marked on the map just beyond the Croig turnoff. In fact one part branched off to a farm, not named on the map. What is wrong with the O.S? They seem reluctant to put in stuff that is actually there on the ground. It was the same with the track I followed, it actually is a bridleway that in turn leads to a footpath, complete with a litter bin and footbridge over the burn. It skirts the shoreline and leads to Croig. Where I am actually camped it right on the edge of the shore. Literally a few feet from the water's edge. The wind is fairly strong out here and is buffeting the tent to the point where I have made use of the extra guying points. Not having sufficient pegs I collected some driftwood and made a few extra ones. One of the benefits of having a good knife. White caps are rolling up the inlet. Temperature is down tonight too, am comfy though.
Saturday 12th July. Camped at Tobermory campsite.
Sat this morning watching gulls feeding on the banks of seaweed exposed by the receding tide. A couple of curlew where also probing the mud and silt between the rocks. Something caught my eye. it was a distinctly different bird, a sort of browny grey, mainly grey though with a predominant whitish colour underneath. Fairly big too, the only bird I can find in the bird book that matches it is a greenshank. Also spotted a couple of eider ducks. Backtracked to the road to come around by Dervaig. It is quite easy to see why the Ilse of Mull rally hold special stages on this part of the island. The road loops and twists then climbs, only to swoop down once more. There is a steady pull up from Dervaig. The road reaches a bealach, as I came over the top I suddenly realised the car that had passed me a while back was the same one heading up another hill in the distance. In fact though it was fairly pleasant walking. Considered wild camping somewhere around Tobermory for the night but in the end used the campsite for convenience. Tomorrow I shall be heading back to Oban and then travelling down on the bus Monday morning first thing.