The Malvern hills had been on Mike's to do list for some time. Finally he found time for a few days to visit and invited me along. On the Monday morning we headed off down the A1 in atrocious conditions, with heavy rain and poor visibility. For once we were glad that instead of our normal routine of camping, we had opted to stay at a Travelodge. There was little difference cost wise and, given the conditions, much more comfy. 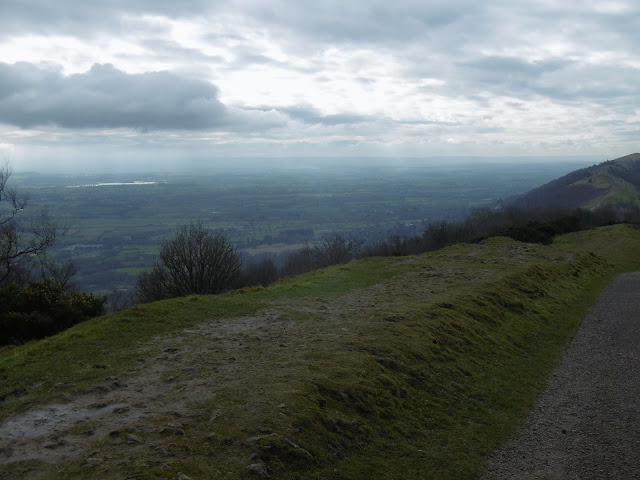 Much to our relief, Tuesday turned out to be dry and in fact was quite pleasant. With the car parked at Upper Wyche, we made our way up to Worcestershire Beacon. A chilly wind but all round panoramic views. 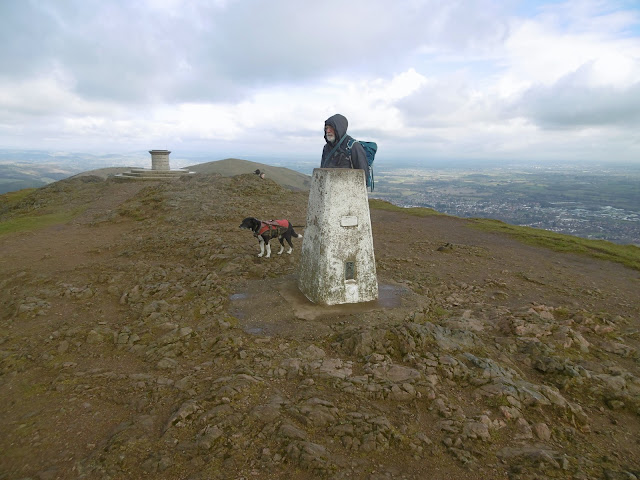 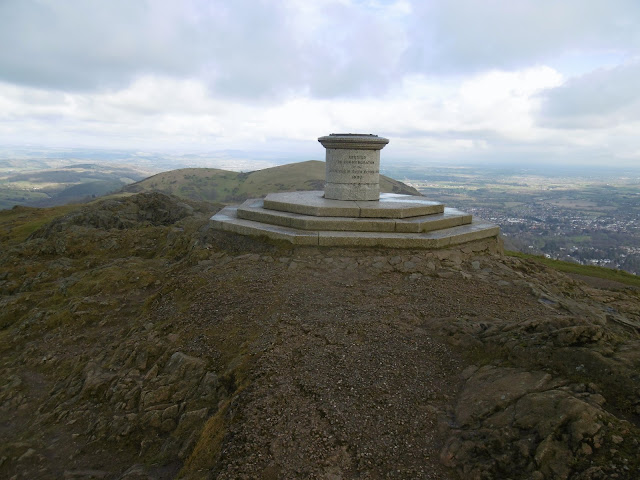 Steady descents and ascents on mainly hard paths led us over to Sugar Loaf hill and North Hill. There are a plethora of paths covering the Malverns and it can prove a wee bit tricky to ensure that one is on the desired route. 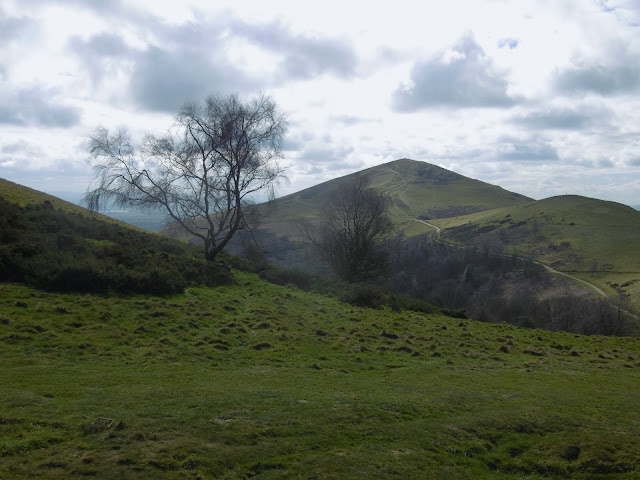 Fortunately we avoided going astray and contoured around the hills back toward the car park. 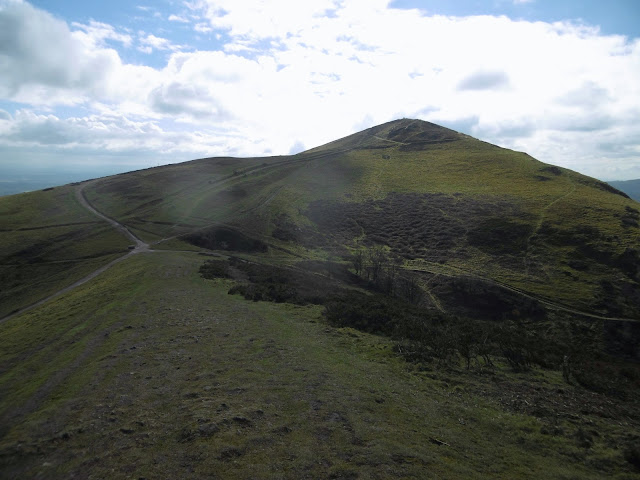 .Continuing down past the car park and across the road, a quick dash in to the public loos and then a steady ascent upwards to Perseverance Hill and then a high ridge walk, taking in Jubilee Hill, Pinnacle and Black Hills. For a weekday there where a fair number of folk out and about. In one area we passed through a small herd of Dexter cattle being used for conservation purposes. They appeared surprisingly placid as we passed through them. 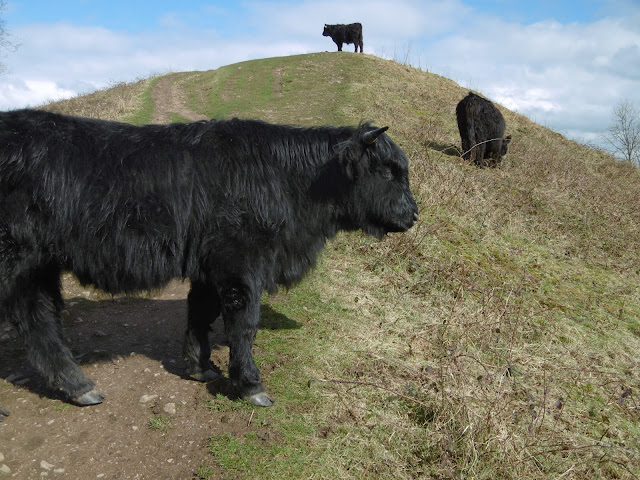 Looking back I was a little surprised to see a woman approach one of the beasts, throw her arms around its neck and give it a hug. The animal stoically remained unmoved by such behavior. Maybe it is a local thing and the cattle are accustomed to being hugged? 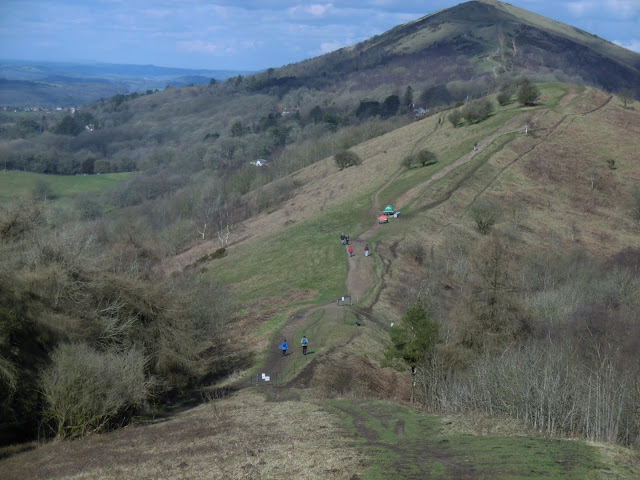 We turned at Black Hill to head back. A short but rather uphill bit had me stopping at a convenient  bench for a breather and meds.Once again we followed a path that undulated around the hillsides passing through steeply wooded slopes to arrive back at our starting point.
Wednesday was windier but remained dry There was a cafe at British Camp by the car park, here we enjoyed a bacon butty before setting off. A slow, steady plod led us up Herefordshire Beacon and the hill fort. It had been a suggestion that this was the scene of the last stand by King Caractacus. However, it appears that there is no evidence of any battle here. It is now accepted that the hill fort was abandoned and king Caractacus  toddled off elsewhere. 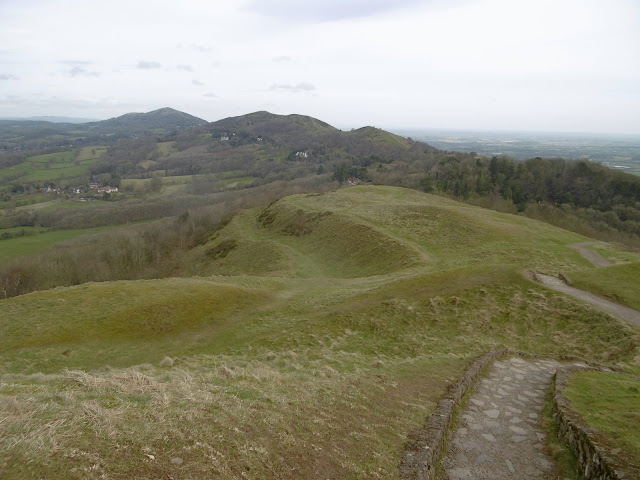 The wind was strong on the top and we did not linger long. 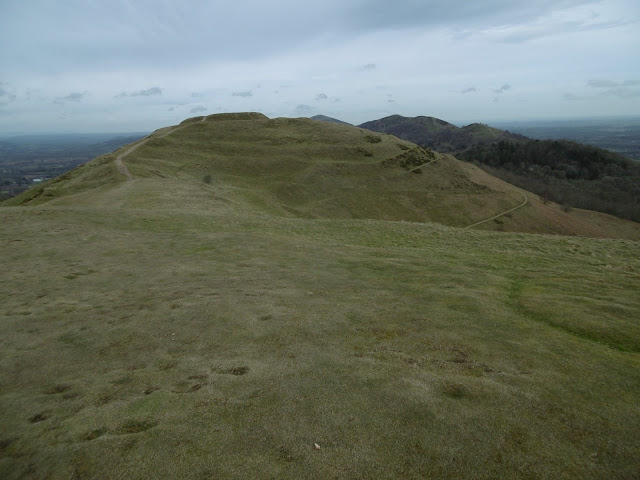 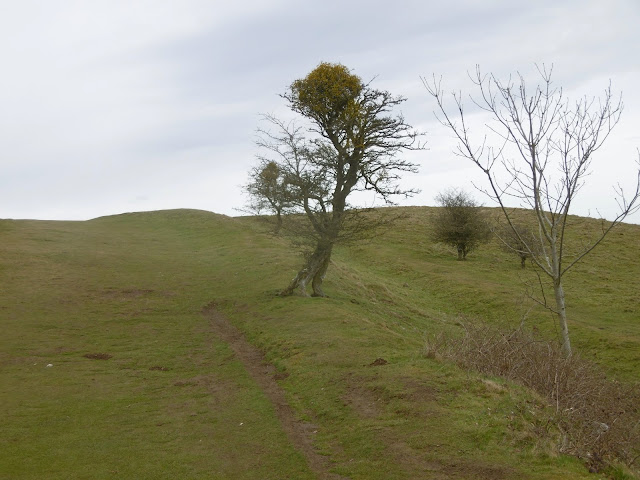 Mistletoe on an ancient blackthorn bush.
A long descent and then around to Gullet quarry which displays some fascinating bands of differing rock layers. 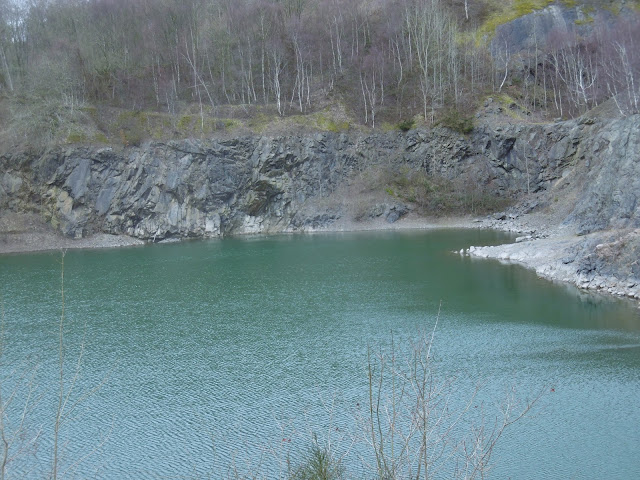 Gullet quarry, swimming strictly forbidden!
. A very wet path led up up through the woods to join the track leading up to Midsummer Hill. A pause for a spot of lunch and Mike nipped off to visit a nearby obelisk. Wanting to reserve a wee bit of energy, I sat and waited for him.
Midsummer hill fort is ancient and encompassed a large area. Archaeological surveys indicate it was violently destroyed in AD 48. 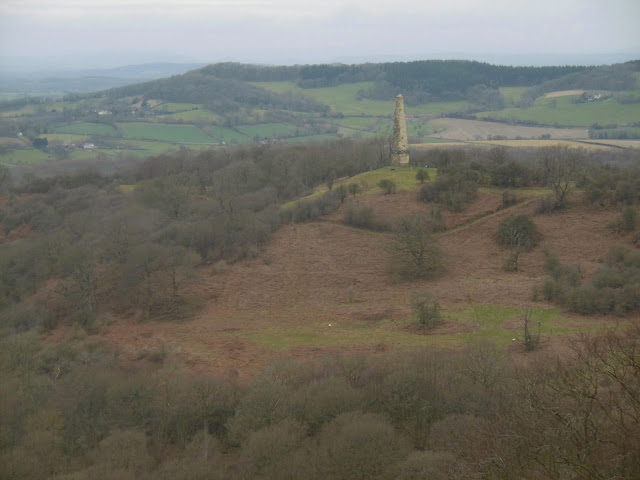 A long, steady descent led us down to Hollybush. Mike had his eye on Ragged  Stone Hill. It was just a quick up and back. Looking at the steep path I once again opted to wait that one out.
Minor roads, footpaths and bridleways led us back to British Camp and the carpark The steep uphill bit by the reservoir was a little sting in the tail!
A pleasant two days. The Malverns, despite being highly popular, offer some grand walking with many places to explore and wander.There are plenty of contours but nothing extremely steep. 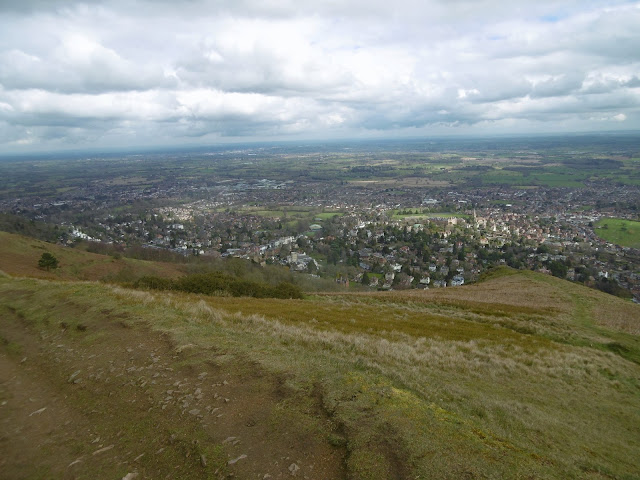 Looking out over the Severn valley. 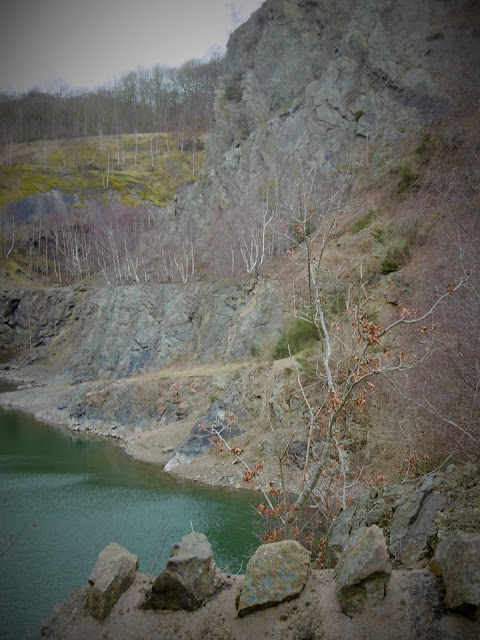 My winter trip to scotland had not been the best. Lack of fitness, problems relating to my Parkinson's, all made things a wee bit difficult at times. Recently, on a couple of trips and day walks with Mike, I once again found myself struggling. Partly, I suspect due to blood pressure, eg, feeling quite faint with blurred vision, and finding it difficult to move at normal pace, everything slowing down. That was worrying and somewhat demoralising. The Parkinson's specialists tell me that it is related to the disease.
Recently I went through a whole series of tests and a MRI scan prior to the possibility of surgery to control my tremor and balance things out a bit. The latest recommendation is to be fitted up with a Duodopa pump. This is due to the fact that the alternative will eventually mean taking medication at least ten times a day. This system delivers medication direct in to the intestine via a permanently inserted tube. It is worrying and at the moment I am waiting for test results and further clinical appointments.
Trying to look on the positive side of things, I have been looking at ways and means of adapting to this pump system. The pump itself is quite large, somewhere around the size of a small house brick.It raises odd questions, for example, ensuring that the tube will sit above the hipbelt of my rucksack. How best to carry this thing. Battery life, it runs on two alkaline batteries, not good in cold weather. Daily maintenance will mean adapting tents to give me a bit more space. bathing, swimming and the such will mean disconnecting and reconnecting everything .
Apart from that I have not been away so much of late. One reason (excuse?) is that, though the Cheviots, are only up the road from me,  relatively speaking, they are not easy to reach via public transport. It involves catching three different buses and some four hours of travel each way. 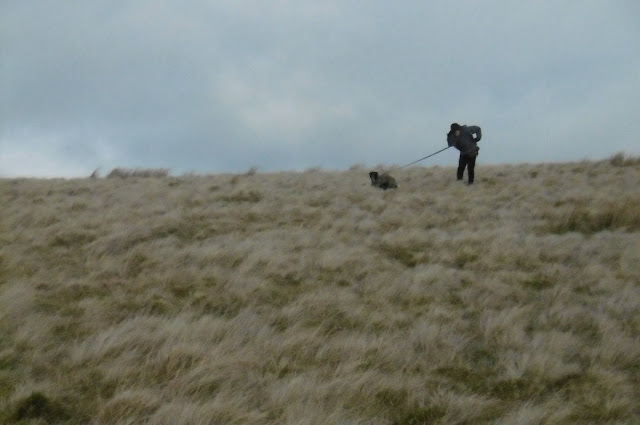 Things have, at least been ticking over. with fairly regular local walks. Many of those have been the trek over to Whitley Bay, giving me an average of seven miles. Once more I have, on occasion  have had one or two bad days. To vary things a wee bit I have walking up and down a couple of steep cliffside stairways leading down to two rocky coves. 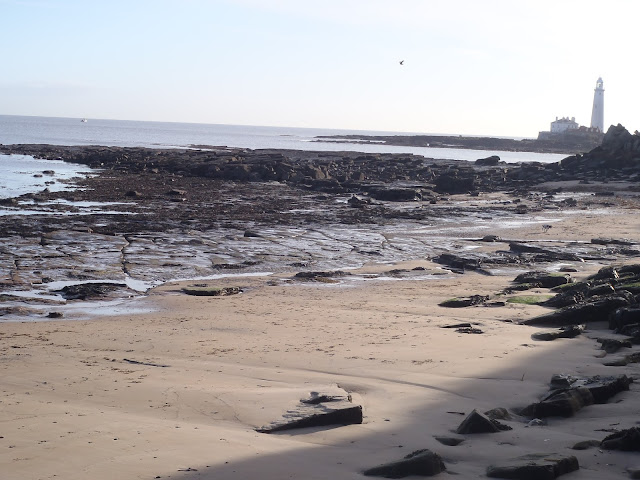 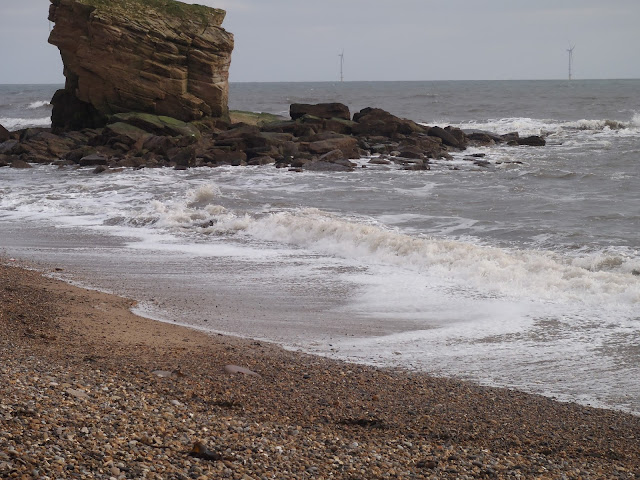 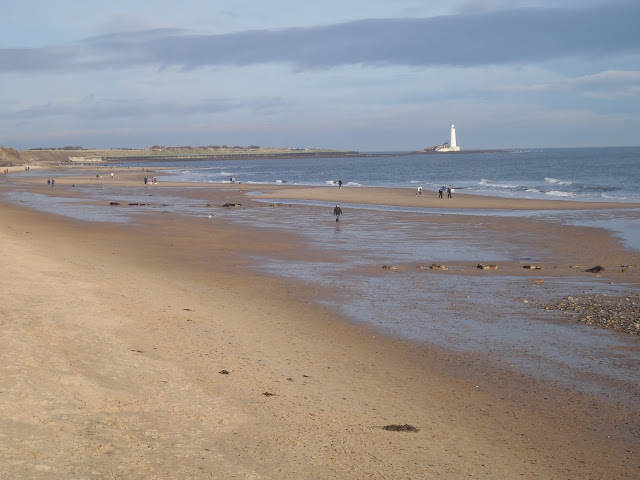 Receding tide
Over the winter months I have continued with my forays in to the north sea. There is deliberate hesitation here, in that on most occasions it has been a case of getting in, having a dip, getting wet and getting out. 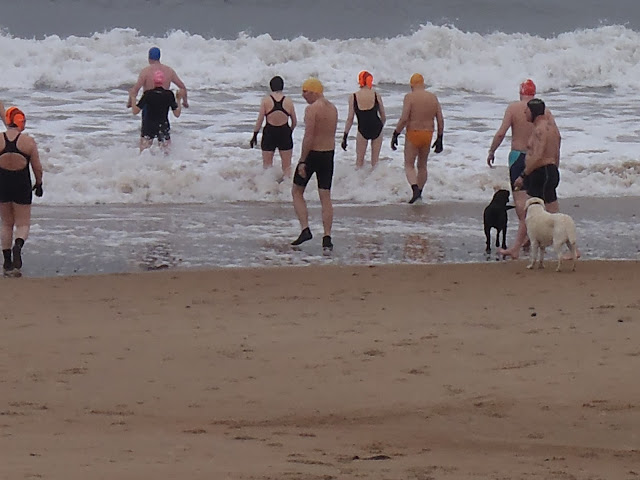 Taking to the waters. 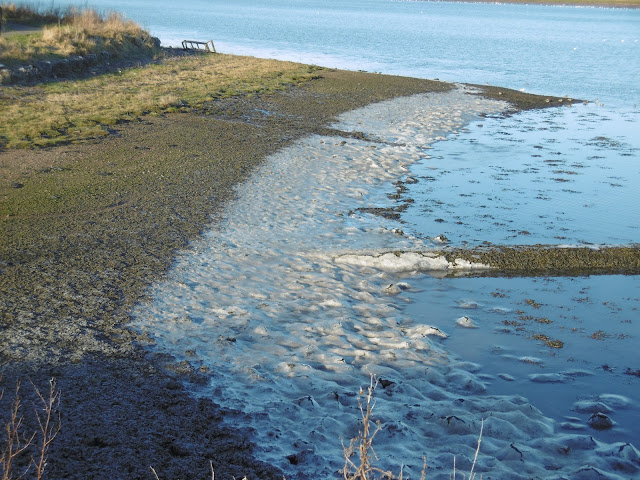 Ice on the river. 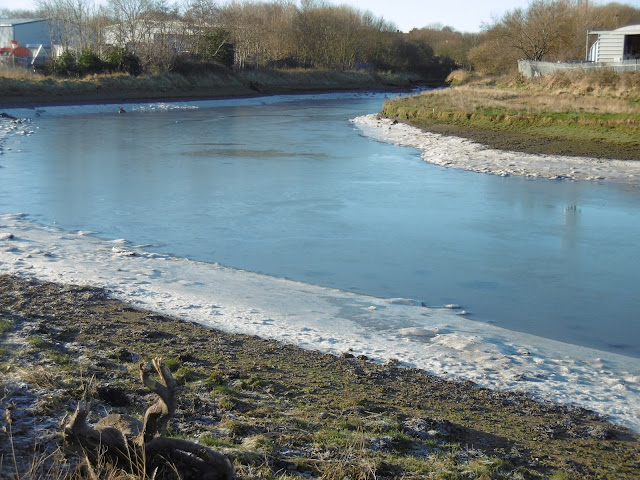 A skim of ice on the creek.
Gales, blizzards and sub zero temperatures have made things difficult over the last week. A planned overnighter was scrubbed and the rucksack unpacked due to the severe weather.
Out for a walk on Friday saw an added difficulty. Strong, onshore winds where blasting sand from the dunes inland. Nasty stuff to walk through. Odd in a way too, walking through layers of snow and sand. 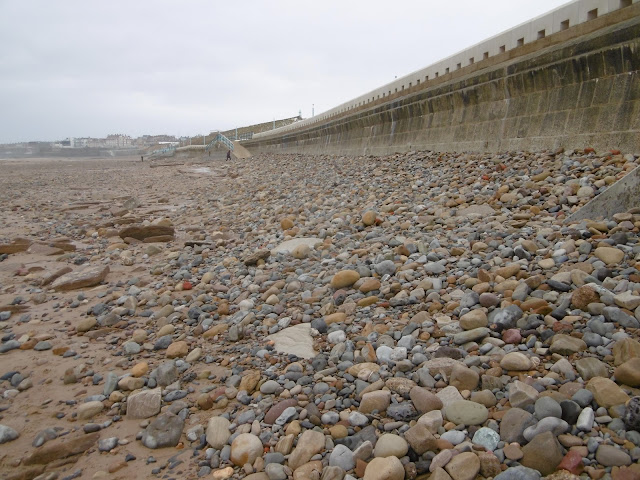 This was once a sandy beach the swimming club use! 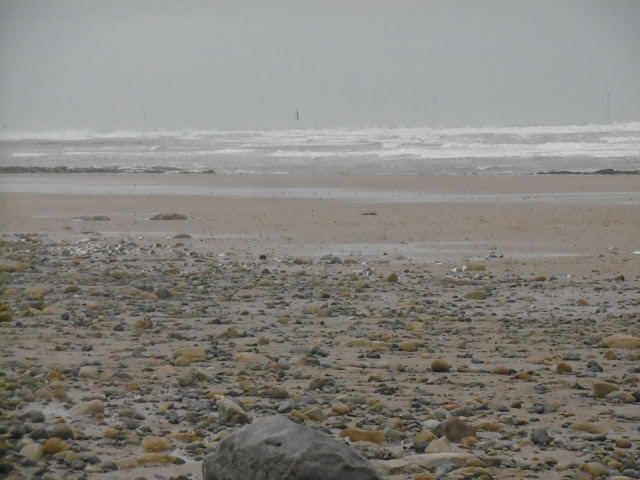 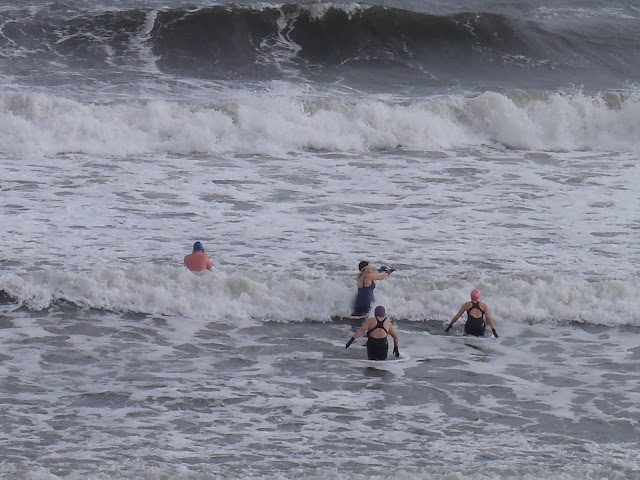 Choppy sea and dumping waves.
Hopefully, with spring around the corner(?) things will pick up a bit. A kit sort out means a few bits of stuff will be up for sale. This includes a virtually new Shangri La 2 and a new Exped sleeping pad. Anyone interested, let me know.