It is rare for me to write up a rant, however, this is one of those occasions. So folks, please excuse me while I indulge in a bit of a grumble. For some time I have been experiencing foot problems. When travelling my feet and ankles swell. The main issue though is that both feet, in particular my right foot, have been growing increasingly painful. Wearing ordinary shoes now means pain. This is mainly around the big toe area which is also distorting and pushing my other toes out of line. After many months I finally saw a podiatry specialist, (re human farrier). He was concerned over the state of my feet, muttering something about metatarsus damage  and promptly put me in line to see a surgeon. A few days back I saw said surgeon. After poking and prodding she said surgery was very much a necessity.  My response was 'fine, let's get on with it, the sooner sorted, the quicker I can start recovering fitness and get back on the hill' There was one problem, I am a single person, living alone, managing my own affairs. There is no family and so forth. Due to this and not being able to put in place a care worker, someone to cook for me, help me to the loo and so on, collect me from hospital and take me to physio. Thus surgery has been cancelled. There was an offer of a short term solution, cortisone injections. Other people live in similar circumstances as me; it appears that single people living alone are being penalized in situations such as this. So, I am not a happy bunny. Will it stop me heading to the hills, doing bushcraft and the likes? Not ruddy likely.
Posted by Dawn at Thursday, November 10, 2011 7 comments: Links to this post

Sometimes the urge to get away for a few days on the hill is like a continuous itch that refuses to go away. Cash wise it was hardly practical. Fitness wise probably I would be pushing things a tad?. However, the possibility of further surgery gave the need for a trip away a sense of urgency. Trouble too with a greedy, obstreperous, money grabbing internet server was getting to me as well. Their perfidious actions have left me angry and agitated. A few days afoot hopefully would help preserve what little sanity I may have?
A search of the long term weather forecast indicated mixed conditions; some sunshine and showers, more prolonged heavy rain, high winds and low visibility on the hills. Quite normal for the area and time of the year really! Ah well, am carrying my winter sleeping bag, a book and a good supply of tea bags. 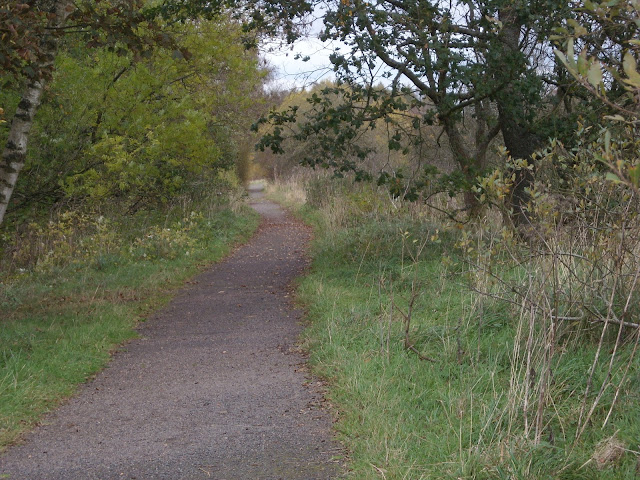 Part of the South Tyne trail.
It was a a bit of a prolonged journey up; London to Leeds Leeds to Carlisle and from there on to Haltwhistle. Arrived in Haltwhistle early afternoon; there was a quick dash in to a shop for a soft drink and bar of chocolate for lunch.The trail was easy enough to find. It is the old railway bed that ran down to Alston. It has been described as boring, personally I would not go that far. It is one of those trails though that you can switch off and just bimble along, brain in neutral and your mind taking flights of fancy wheresoever it pleases you. The day was fairly mild and dry and I was content to just coast along. 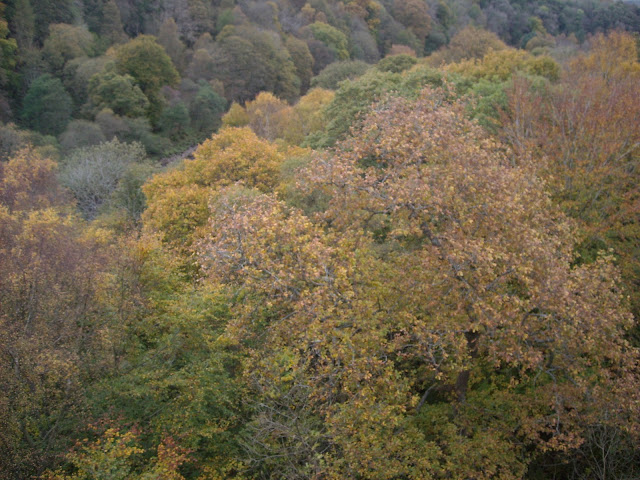 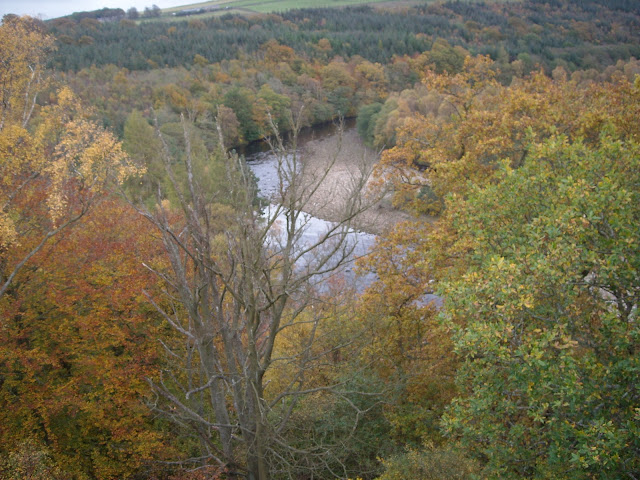 There where lovely views from the Lambley viaduct; however, at the end of the viaduct a large barrier had been erected, denying access to the old station area. A set of steps led of to the right and descended below the viaduct. Rather than follow the steps down and being uncertain as to where they led I opted to clamber over the fence,scramble up a steep bit of bank and walk past the old station buildings. Further on all was made clear, the path had been diverted to stop people walking past the converted station, now obviously a private residence. A notice on the other side of the barriers would have been helpful. 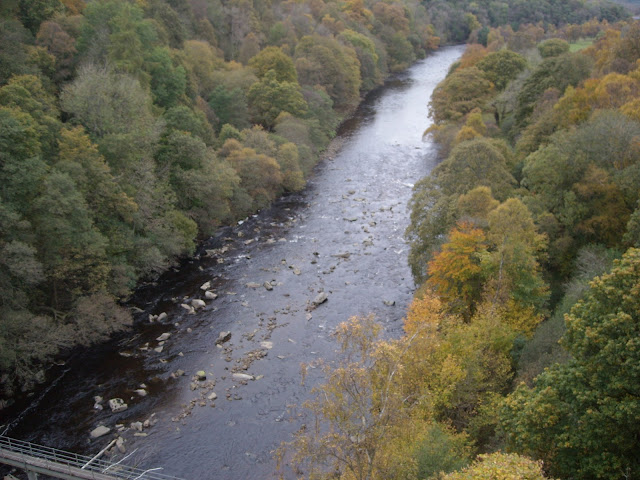 After careful checking of the map, it was obvious wild camping in this area would not be easy. However, I had a couple of places in mind. my second choice turned out to be alright for a stealthy camp, close to a stream and on the edge of a wood. (OS map OL43 GR677556) It was just about last light when I stopped and I was discreetly tucked away 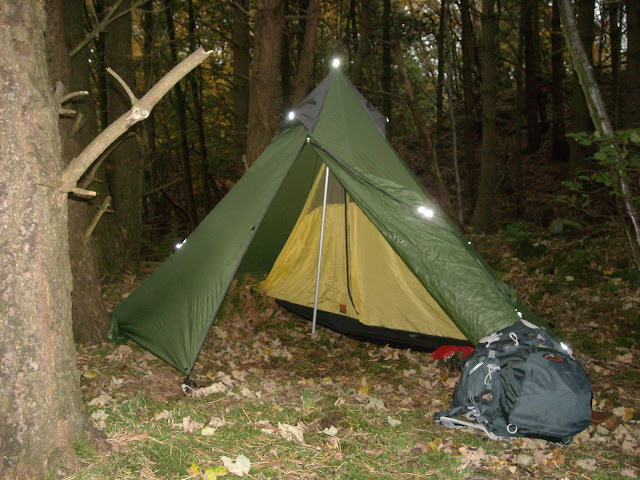 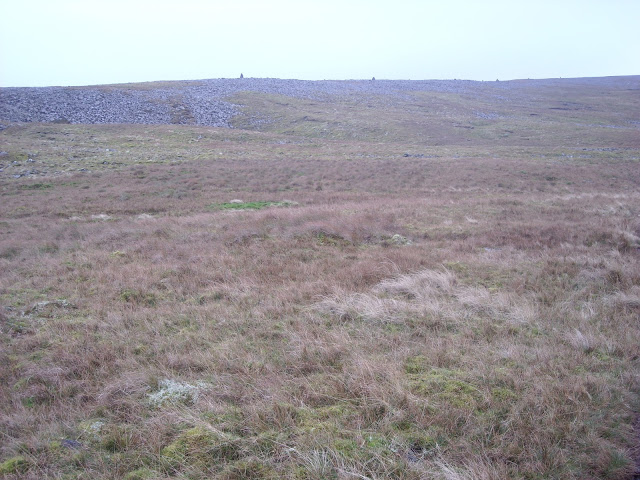 High moorland, five minutes later this had all vanished. 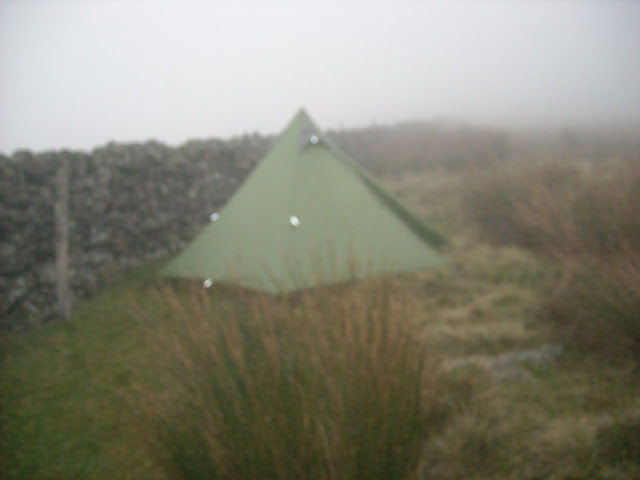 Weather closing in.
Monday. Another storm bringing a wet and windy night. Looking out this morning, everything was wet and dripping, no visibility and although the wind had eased it was still blustery.A little mind worm had been niggling at me, was it back the clocks where meant to go or forward? My watch had been put back and hour and I was certain this was right but there was a slight doubt! A cold, shivery strip wash in the tent and I was soon packing up and ready to get moving. With no visibility and thick wet cloud enveloping the hill, care and concentration where needed as I descended. Oh my though, the hill was running with water and conditions underfoot where greasy and I was slip sliding around like a skittish drunken ballerina trying to tap dance on ice! Odd as it may seem, despite the given conditions, there was something exhilarating about it all. Mad, utterly away with the fairies, I know, but still? Coming down out of the murk conditions where less wild, a spot of drizzly rain but nothing to worry about. Mind, trying to negotiate a footpath near Kirland had me muttering under my breath a tad. Cattle had poached the ground in to a quagmire. Some of it was just wet and sloppy stuff, a distinctive red colour. Some of  the mud though was of a paler hue and had the consistency of well made, cold congealed porridge. In places I sank in deep and had to struggle a bit to get myself out. By the time I got across the field my over trousers where well slathered in mud. That cured me of any idea of trying any more footpaths. Road walking was now the order of the day.A signpost  indicated Appleby was twelve miles away. A tidy step and a steady pace would be needed. The alternative that I had noticed on the map was Langwathby at six miles distance. That was the easiest option and that was the direction I would head for. Walking in waterproofs is never a favourite of mine and I was glad to get out of them. At this lower level the weather was not bad, a bit of drizzle, the odd spot of rain but nothing to worrage about. Fortunately the roads where quiet and I was able to shuffle along at a steady amble. As road walking goes it was not an unpleasant walk out and I arrived at the railway station in plenty of time for the train. Overall, to put it in the broad Scots vernacular, 'It wasnae a bad wee daunder!'
Posted by Dawn at Wednesday, November 02, 2011 6 comments: Links to this post