Unfortunately I have no photos to hand; however, I am putting up my Terra Nova Laser Comp. for sale. Drastic measures but needs must. It is in very good condition, used only a few times over last summer.  Colour green. Asking price, £180 o.no. including p&p.
Posted by Dawn at Tuesday, January 21, 2014 No comments: Links to this post

The Howgill Fells are always a fine place for a wander. A few e mails back and forward and it was arranged that Mike and myself would meet up at Kirkby Stephen rail station on the Thursday. (northernpies.blogspot.co.uk)
Lunch at Tebay, a very popular services. A goodly lunch and then we headed out up and over Tebay Fell. Mike had a slight mishap which involved car keys and a few other items?? With the situation resolved, we both agreed that to reach the suggested place we where heading for would mean pitching camp after dark. A bit of casting about and the tents where duly pitched close to an old sheepfold. As it turned out, just in time. It began to rain and continued on and off all night; at times heavy.
Friday morning saw thick dark clag on the hill tops. A damp, grey sort of morning. Mike though rapidly devised a second plan. Instead of heading upwards we contoured around the hillside and over to Uldale End and in to Uldale. It was a pleasant wander following the beck upwards. Underfoot it was wet and boggy but no real problem. Ponies where grazing the fell sides.We stopped to admire and coax a little closer a pair grazing close by. Stocky beasts, with thick, shaggy coats and very large hooves. Obviously hardy animals, inured to harsh weather. Mike has a lovely photo of them. We stopped early, setting up camp at Blakethwaite Bottom. Once more we just managed to dodge the rain. Mike dozed while I settled down for a spot of reading. 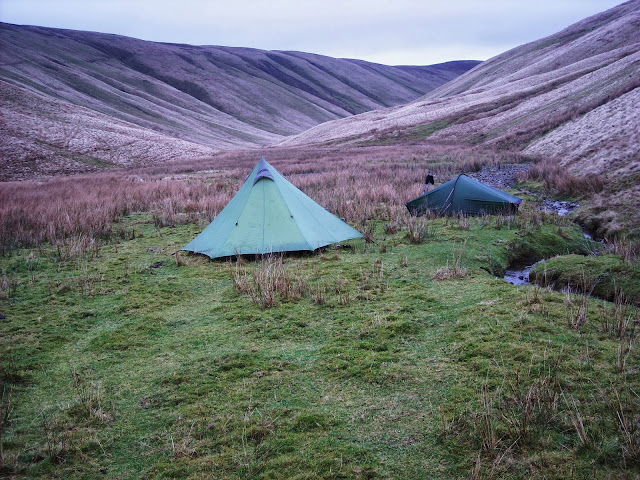 During the night  the rain stopped, the temperature dropped and the tents froze. In the early hours it snowed. However, the weather cleared and we where treated to a morning of sunshine. 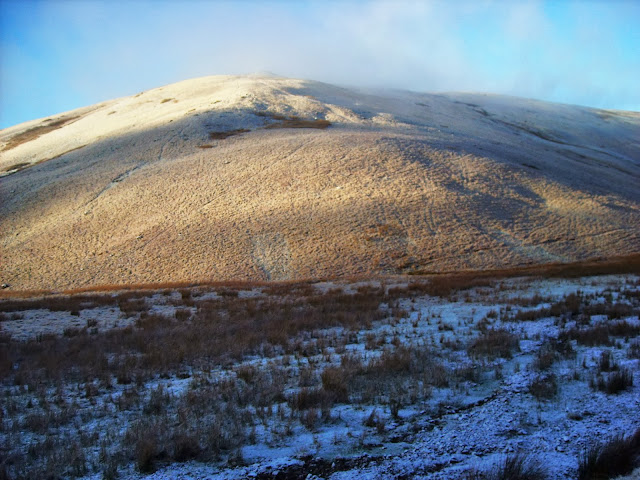 Leaving the tents where they where, we followed the path that contours around above The Spout and around by Black Force. A nice wee path, but narrow, not much more than a boot width in places, with the hillside falling away steeply to one one side. Obviously care had to be taken. We ascended up to Fell Head which was in a state of murkiness, low cloud covering everything. We ambled on over toward Over Sale and then turned off to head back down and in to glorious sunshine for an easy afternoon. Mike opted to brush up on his snoozeability programme and I went for a wander and pottered about. By around four pm the temperatures began to plummet and the tents froze once more. 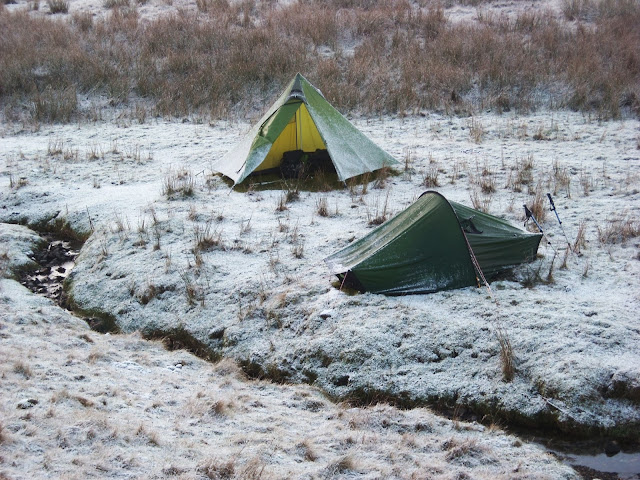 By Saturday morning the wind had risen, a bonus in that the tents where no longer frozen. Heading up to Uldale Head we caught the brunt of the wind. Strong gusts had us skittering sideways and leaning heavily on the trekking poles to maintain balance. A pleasant walk back to Tebay and then off to Kirkby Stephen for a spot of lunch.
A regular tremor is one of the affects I have with Parkinson's. It makes taking photos difficult, plus my camera was playing up.Hence, few photos. Nip over to Mike's blog, link above, he has some fine photos. Having dietary problems poses a few problems food wise. Recently I have been trying out the products of a small, UK based firm that supplies dehydrated food. (www.mountaintrails.org.uk) A couple of outdoor folk are at the heart of things. They started off with dried breakfasts, porridge at first and have now added granola. There are now a range of main meals, including a few vegetarian. Their mince, carrots, peas and mash offers a tasty supper. The range has now expanded to include pudding. The hot apple and custard is a welcome addition to supper. Prices are reasonable. Worth a try at least.
Posted by Dawn at Tuesday, January 14, 2014 14 comments: Links to this post