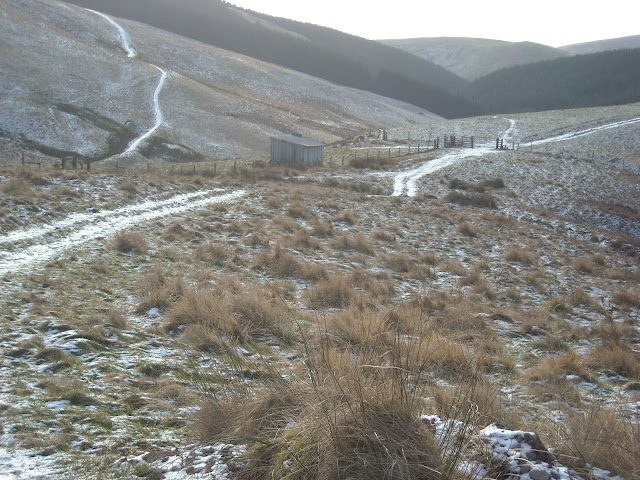 After our last attempt at a winter wander,which failed to turnout as planned. Mike (northernpies.blogspot.com) hatched a plan, like a good boy scout, he is good at devising plans. It started with an e mail, Cheviots, Mike suggested. Gradually a plan was hatched and a date agreed upon. Thus it was that on the Wednesday the 1st of February I arrived at Durham station from 'that' London. The pack was heavy with five days food. Mike was waiting for me at the station. First things first, we went in to Durham for a late breakfast. Having spent time perusing the weather forecasts I suspected we could be in for some very cold weather. My old, heavy duty salopettes had been dug out of the cupboard and generally I had come prepared for cold conditions. Arriving at Alwinton it was obvious that indeed conditions where going to be cold. However, the day was dry and clear and after Mike had notified the local constabulary that his car had not been been abandoned. We set off up Clennel Street. The pair of us taking a slow easy pace, dictated by heavy packs.Galvanised by Mike,s regime of daily walks, I too had been attempting to put a few miles in to my legs, following a regime of two or three hours of walking most days of the week; including a few hills. Not an easy prospect in the 'that' London. We had set out in the early afternoon and the walking was pleasant with a few inches of snow underfoot and the ground mainly frozen. Turning off from the main bridleway we headed over towards a small hill marked as the Castles and then dropped down to camp beside the Usway beck. Already the temperature was dropping, with clear skies indicating a frosty night to come. Although we had only been walking a few hours it was pleasure to stop, set up camp and relax with a welcome hot drink. 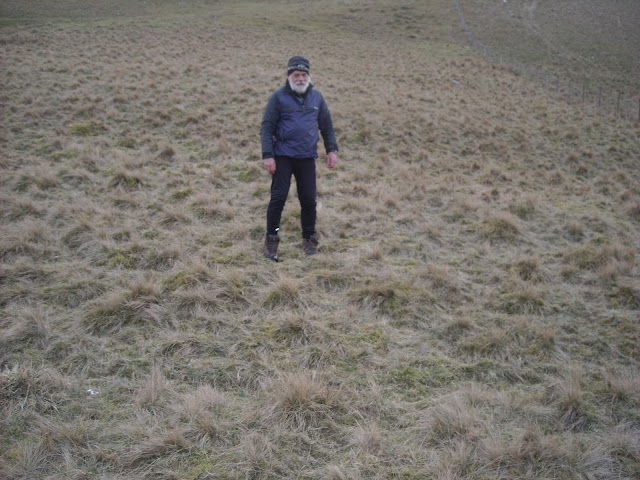 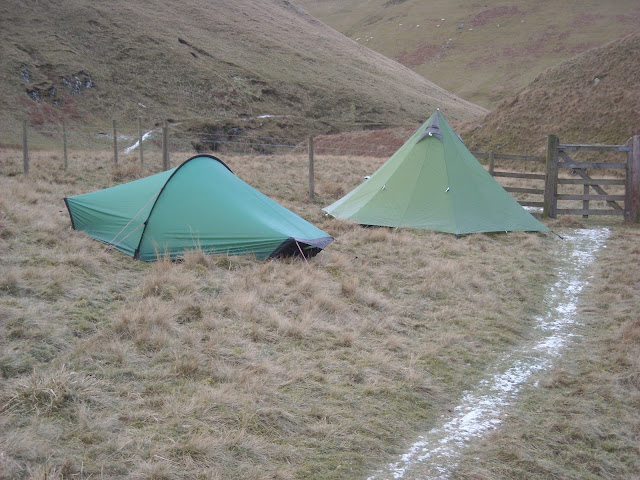 Thursday 2nd February.
A frosty night with ice on the tents in the morning. A routine had already been established, with gas cylinders, cameras and any electronic devices going in to the sleeping bag to keep them from freezing overnight. It was a shivery start to the day and we where glad to get moving. Mike can be quite deceptive in his manner of walking; a slow, but steady pace that can eat up the miles. Our way led up the valley and we noted a few other possible camp spots. The path plunged in to the forestry and although it only followed the edge of the trees, in places it felt almost Stygian. It was a relief to break out in to the pale, winter sunlight once more. A check of the map at Fairhaugh and then a long steady haul up to the Border Ridge with a pause to admire the view and relish the wintry sunshine. Lunch  on the border was a swift affair. The cold was seeping through all our layers, with a light breeze adding to the wind chill factor. However, the walking was magnificent as we headed over to Windy Gyle and then descended in to Scotland down Windy Rig. A great commotion as a mixture of quad bikes, someone on a trail bike and  a horse rider, resplendent in a red coat poured over the opposite hillside. The bugling of hounds indicated it was a local hunt. In all probability they where following a pre laid scent trail?
Setting up camp by Back Burn, it became obvious that we where in for a very cold night. By four pm the water in my cooking pot had frozen and my water bladder was also going the same way. Both of us wasted little time in getting in to our sleeping bags. Once supper was cooked and hot drinks made, gas cylinders and cameras where placed in the sleeping bags to protect them from the cold. Winter nights are long and normally I read for an hour or two, retrieve the gas cylinder and make a final hot drink and then settle down for the night. One thing I dread is waking up late at night or in the wee small hours, with an need to go to the loo. As much as I try to ignore it, the pressure in my bladder leaves me with no option but to bow to the inevitable. It is a long process, unzip the sleeping bag, grope for the headtorch, fumble for my boots which are at the bottom of the tent and are stiff and icy. Bear feet jammed in boots, in a state of partial undress, unzip the tent, a deluge of ice crystals showering down adds to the gasp factor. Dive out of the tent with chattering teeth. By the time I get back in to the sleeping bag I feel half frozen and am shivering violently. 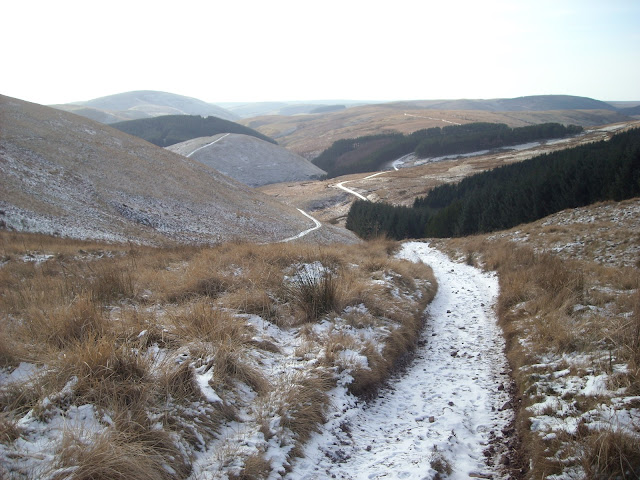 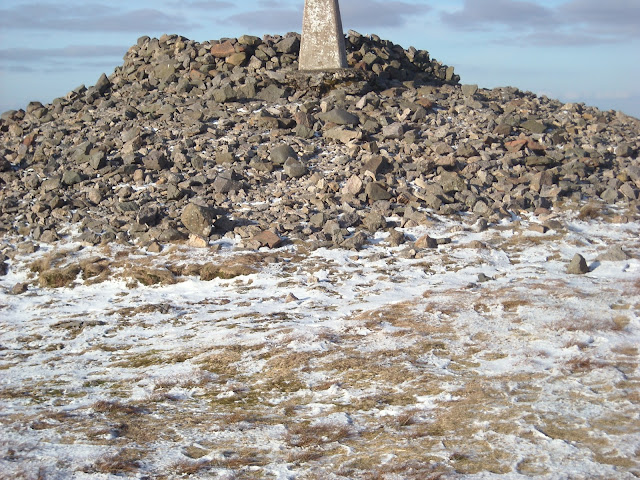 Overnight the temperature had plummeted, despite bring the water bladder in to the tent, it had frozen. Later we where told temperatures down in the valleys had been recorded at around minus ten/twelve. Trying to clean my teeth, I found my tooth paste was partially frozen. A few baby wipes I had packed in my wash  kit where absolutely frozen. The tents where totally sheathed in ice. The worst of the ice is shaken off but the tents are still awkward to.pack. A long pull back up to the Border Ridge at least got the circulation moving. Cold it certainly was, but the walking was splendid and the views of the snow covered surrounding hills was magnificent 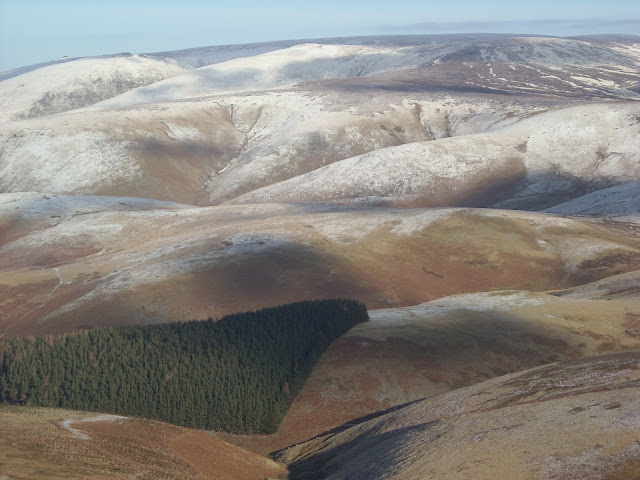 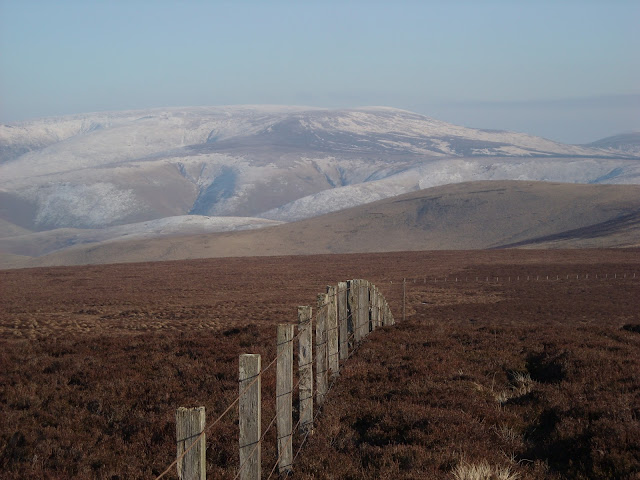 .A delightful walk following the Pennine Way along to the Rescue hut. High moorland, wide open spaces and Mike and I had it all to ourselves. From there by devious routes, we negotiated our way through tussocks and rough ground, with Mike softly singing 'tiptoe through the tussocks', to arrive at  Buckham's Wall Burn. Our chosen camping spot for the night. One downside was that the area was somewhat hemmed in by the low surrounding hills. Frozen ground indicated that it saw little sun. It was not a bad camp spot though. A thump with a lump of stone helped drive tent pegs in to frozen ground. Mike was busy attempting to shed weight from his rucksack and passed over to me a large portion of malt loaf and custard. It was delicious, a welcome treat to go with supper. 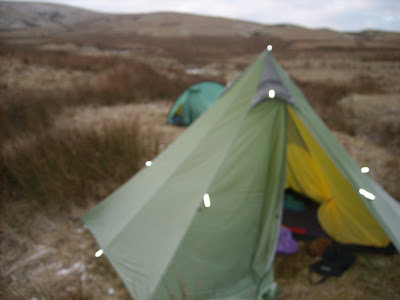 It was another cold night. Condensation from ones breath freezes and causes  ice crystal to form on the inner tent. Ice can form too around the opening of the sleeping bag. There was some strange beeps emanating from Mike's tent. He later informed me this was due to him cuddling up to his mobile phone!Tents are given a good shaking to remove the worst of the ice coating them. Despite that they remain stiff and awkward to pack. Once underway we followed the Buckham's Wall burn down the valley. In places the burn was sheeted over with a layering of ice. In places the path also was hazardous with thick water ice. It did not distract from the fact that it is a delightful walk following the burn down. At Buckham's bridge we joined the road that leads down the Upper Coquet valley. Road walking is not my forte and having problems with painful feet does make things a tad difficult. However, the walking was fine. We passed several farms on the way down.  Notices where prominently displayed on sheds, outbuildings and gates, "Out of Bounds" This was a large military training area and it was easy to picture a group of cold and miserable squaddies sneaking in to some farmers barn for a comfy bit of warmth. At first I was unsure, however, Mike also had noted it. The first few flakes of snow drifting down. Small, featherly wisps drifting on the light wind. Gradually the snowfall increased. This at least made things a wee bit warmer. A noticeboard attracted our attention, 'Tea Room One Mile' We exchanged glances; surely not? It was, after all, the middle of winter? Despite a few doubts, our pace quickened. Another sign at Barrowburn raised our hopes even further. Mike tentatively approached the front door of the farmhouse. It was open and the farmers wife came bustling out to make us welcome. With an invitation to get out of our outer layers and make ourselves comfortable in front of the open fire. A pot of tea was brought. There was hot, thick, nutritious soup and we followed that with a large bacon roll each.  Nirvana, an excellent tea room. F  Eyeing the thick, swirling snow outside, we inquired about the bunkhouse. Sadly for us a group had booked it for their individual use. It was the same for a smaller hut as well. Fortunately for us, the snow had eased as we left the tea room. It was a straight forward walk from there, up and over the hill and down to Fairhaugh. Mike goes up hills better than I do. He plods on, slow and steady, whereas I am the sort that stops for the occasional breather. My legs where feeling a tad tired. Mike assured me though that it was good for me! From Fairhaug we had an easy walk through the forestry following the Usway burn. A large, stone built sheep pen offered plenty of room for our two tents. As we set up camp the clouds lowered and soon the snow was falling heavily. It had been an enjoyable day.
Sunday 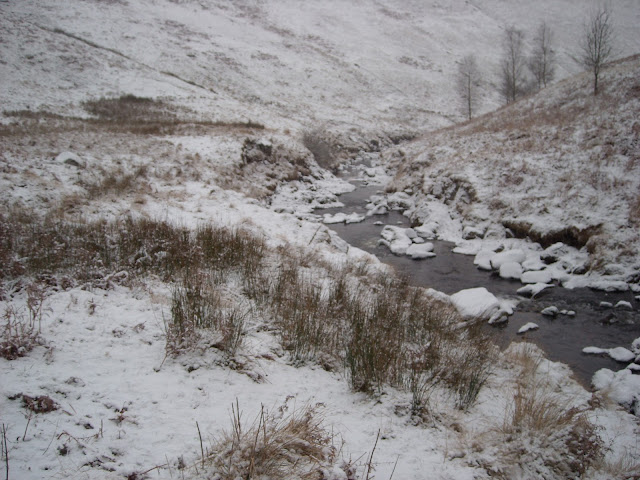 .
The snow fall ceased early in the evening and then the temperature plummeted once more. A dog fox barked close by and owls could be heard in the woods during the night. Once more I had to get up during the night and for some reason found it difficult to settle. Very early in the morning I got the stove out for a hot drink and had breakfast at the same time This morning the tents proved even more difficult to pack than normal. Mine was bundled unceremoniously under the rucksack lid. It was still caked in frozen snow and ice, despite much shaking. Mike had a visitor, a wee mouse and he left it an offering of crumbled oatcake. It was clear  and still as we set off down the valley. The footprints of a fox where evident in several places. It was pleasant walking down the valley toward Upper Coquetdale. A check of the map and we swung off to follow the Path Peth up and over the hill. It was our last and really our only hill of the day, but I think we where both a wee bit tired. We where back in Alwinton by early afternoon. Our last night was to be one of sybarite luxury. We where booked in to the hostel at Byrness, where we where made welcome. The sheer bliss of a hot shower and clean clothes, wonderful. A special treat was a hot meal.
Overall a good trip. Thanks Mike. 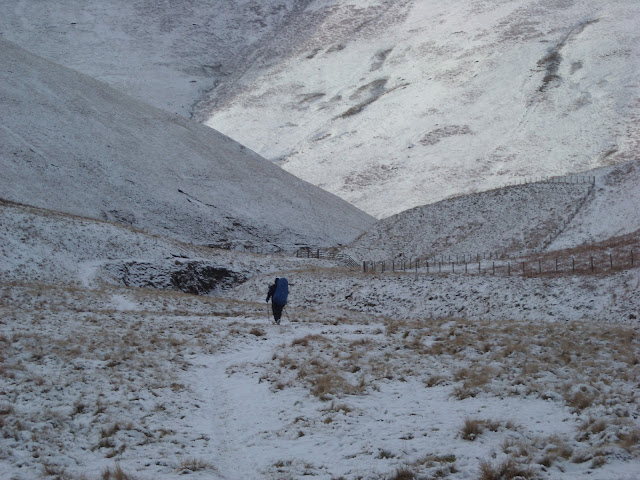 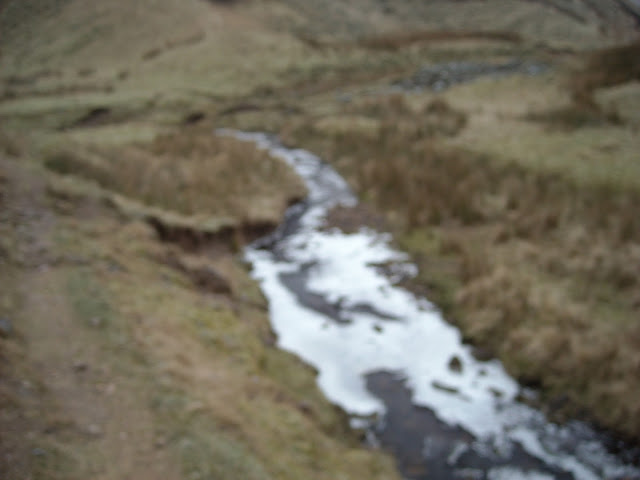 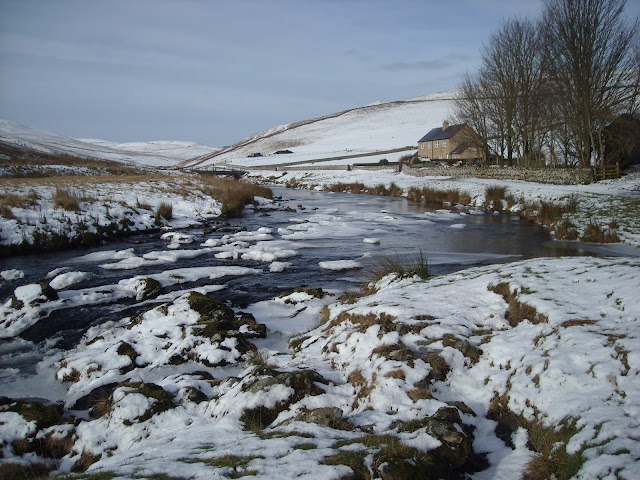 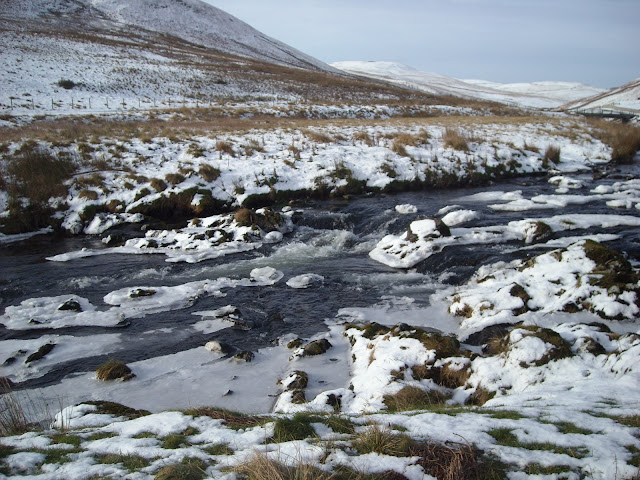 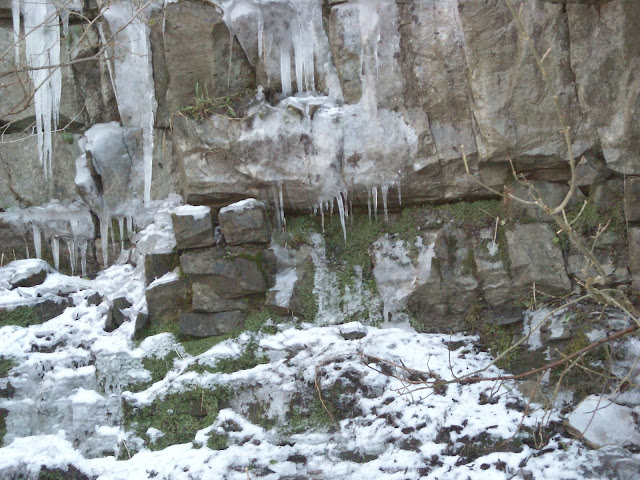 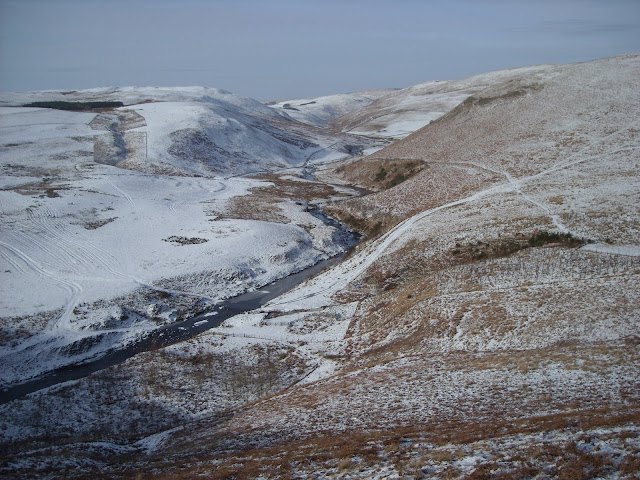