Afoot in the Radnor hills

A week or two back I had gone for an explore in the Radnor hills. In some respects I was obeying doctor's orders which where to keep walking. Also the wandering pie man, Mike (northernpies.blogspot.co.uk) had his eye fixed on a few tops in the region. My first foray in to the area was more in the way of a reccie. The area though is delightful walking country. Slightly difficult for wild camping, due largely to the lack of water in the hills though. With the knowledge gained on my first trip, I managed to draw up a route using public transport at both ends of the walk. The usual flurry of e mails, train times exchanged, a meeting place agreed upon and thus we linked up at Shrewsbury. Mike was rather aghast when he saw the large number of people on the platform  and the single carriage train that served as the Heart of Wales service. Being well used to the vagaries of public transport, politeness was laid aside, as soon as the doors opened and I nipped aboard in double quick time to ensure us a couple of seats.
We arrived in Knighton mid afternoon. It was a steady up hill plod leaving town. However the gradient soon eased off and we enjoyed a pleasant afternoons walking. We made good time and by five thirty we where thinking of somewhere to camp. There where a couple of places I had in mind for our first night out. Mike and I conferred and agreed that Hawthorn Hill was a nice little spot. 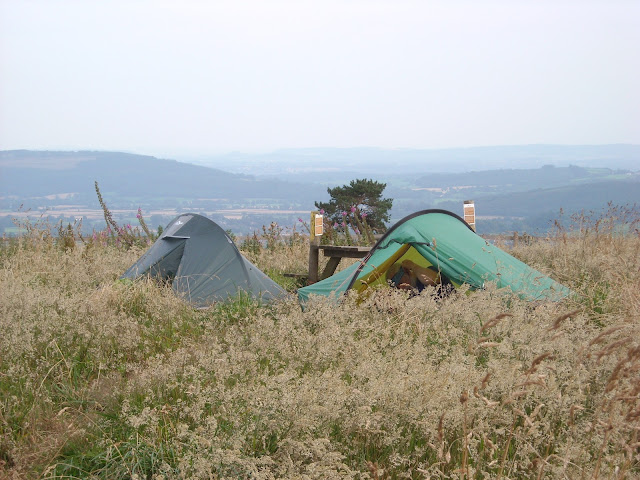 Water was once again a problem. However, I found a water trough which allowed me access to the ballcock and with a bit of juggling managed to fill our large water bladder.
Sunday morning was grey and wet.We where up early, I knew this was going to be a long day and had warned Mike that we needed an early start. We where packed up and under way by seven thirty. Following the Offa's Dyke path,  Kington was reached by lunch time. Mike was, I think, suitably impressed by our progress and also by the countryside we had passed through! Spotting a pub there was mutual agreement we needed a sandwich and a drink. With a fair distance still to cover we did not linger long. Soon we where heading up Hergest Ridge. Mike found the monkey puzzle trees, well, a little puzzling! A visit to the trig point, a little casting about to ensure we actually had the highest point. The big grin on Mike's face made the effort worth while. 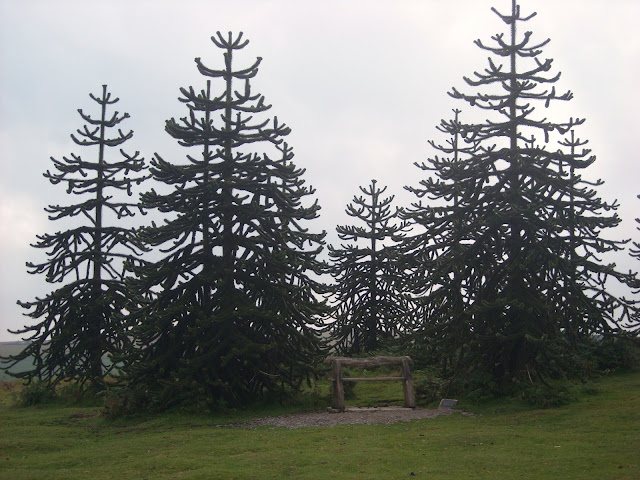 A long descent down to Gladestry where we parted company with Offa We had yet another hill to visit. Despite a spot of bother on my last visit, I felt that our trip would not be complete without a visit to Llanfihangel Hill. There was one slight problem, .it was Sunday the twelfth, the official start of the grouse shooting season. However, being a Sunday, shooting did not start until Monday. That gave us a small window of opportunity. As we made our up toward Wain Wen a heavy downpour had us scrambling back in to waterproofs. As we climbed higher, fueled by a handful of jelly babies, an object higher on the hill caught our attention. Mike thought it was a caravan, possibly someone acting as a lookout? Progressing upward, we found out is was a large water tank on a trailer. Further up the track we passed two guys and their dogs in a landrover. They looked over in our direction and I gave them a little wave and pressed on. One guy gave a nod of his head but otherwise ignored us; odd? Oh my, I was glad to see that trig point, tiredness now was telling. A long drop down to Pant glas and then another quarter of a mile or so and we set up camp close to a lovely, fresh brook. On estimate we had covered around twenty miles over the day
There was no rush on Monday and we took our time over breakfast and finally got underway at around nine. A lovely walk over to New Radnor. We paused at one point to allow a shepherd to move his flock of fifteen hundred spring lambs. Such wonderful skill and dexterity to see the sheep being shepherded in a long flowing column. The farmers accent sounded more west country than Welsh. Tea and cakes in New Radnor. Also we took the opportunity to stock up with water. Knowing that there would be no water high on the hill where we intended to camp, I had brought a four litre water bladder. Possibly a tad over kill but at least we plenty of water. It was an awful weight to be carrying though! 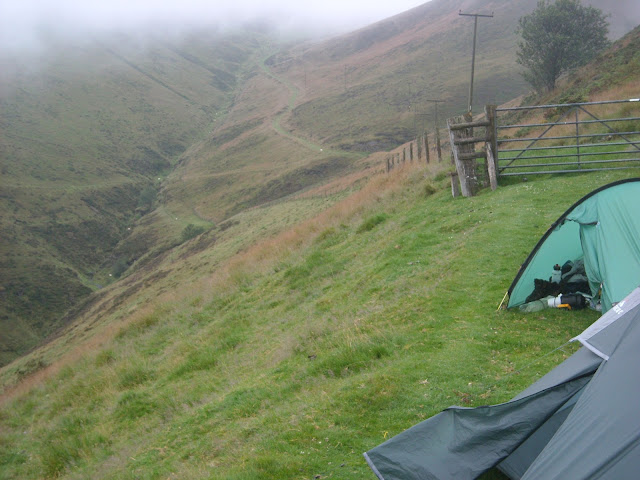 Our intention was to camp high. The bridleway initially started off steep but gradually eased off. The path was thick with vegetation in places. Horses had managed to churn the ground in places to a thick mud, making the going a tad difficult. As we slithered and climbed higher the cloud base was dropping lower. Soon we where enveloped in grey dampness. Initially we where looking for somewhere to camp by Whinyard rocks. Stony ground meant us camping actually on the nearby bridleway. When the mist and drizzle began to clear we found ourselves with wonderful views. Mike was getting excited about the Whimble behind us and shot off for an explore while I curled up with a book and a mug of soup.
Tuesday was marked up as an easy day and so it proved. A gentle walk over to Bache Hill and then over to Black  Mixen. The massive mast dominates the area. Off road motor bike riders had left their mark with deep ruts and churned up bog. It was leisurely stroll over  to the trig point of Great Ross. 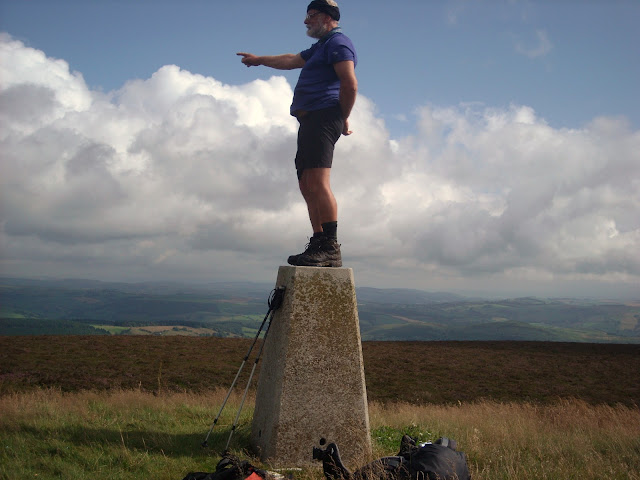 Mike, having a 'yoof full' moment!
We stopped early afternoon near Cross Dyke and after a steep drop down the hillside to a mere trickle of water and a climb back up to the tents, we relaxed. The tents where pitched on a ridge that allowed a gentle breeze to keep off midges and other wee beasties. Something that does seem interesting, is the question of just where all the water goes to? There are streams marked on the map but on the ground they are non existent. The geology is fascinating. Steep, narrow clefts in the hillsides, wrinkles in the landscape, akin to an elephant's baggy wrinkles. A lot of the rock appears to be shale. Possibly water filter down through to aquifers deep underground? 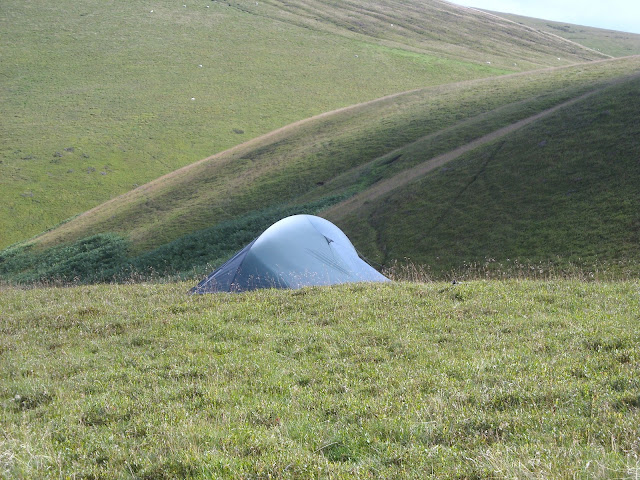 The wind got up during the night and swung around so that the full force of the rising gale was hitting the front of the tents. Despite it being early I decided to have my wash before breakfast. However, Mike gave me a shout, his tent had been trying to take off across the hill and he had packed up and stowed the tent before he lost it. It was a hurried wash as Mike waited patiently. We made Dolau just as it began to pour down with heavy rain. A long wait for the train but we had the shelter of the tiny waiting room. All in all, a successful trip.
Posted by Dawn at Saturday, August 18, 2012 10 comments: Links to this post