This was, in some respects, to be a split week. The first couple of days spent on my own and then linking up with Mike and few other folks mid week. Travelling on a Sunday by train is never a good idea. A day spent  travelling saw me arriving at Llanbedr at around four thirty in the afternoon. A steady uphill plod on minor roads and then a track and a footpath saw me heading for Gloyw Llyn. A rather tiring pull up the hill, the ground underfoot was predominately bog. Reaching the llyn, my one objective now was finding a spot dry enough for the tent. Picking my way around the waters edge,  dense, choking clouds of midges rose from the soaking vegetation. Despite being tired, my pace increased rapidly. A bit of casting about through dense heather and rock and a space was found on the ridge above the llyn. A steady breeze on the higher ground ensured the midges where kept at bay. It was past eight thirty when I stopped, quite a hard evening's  walking and I was wearied. 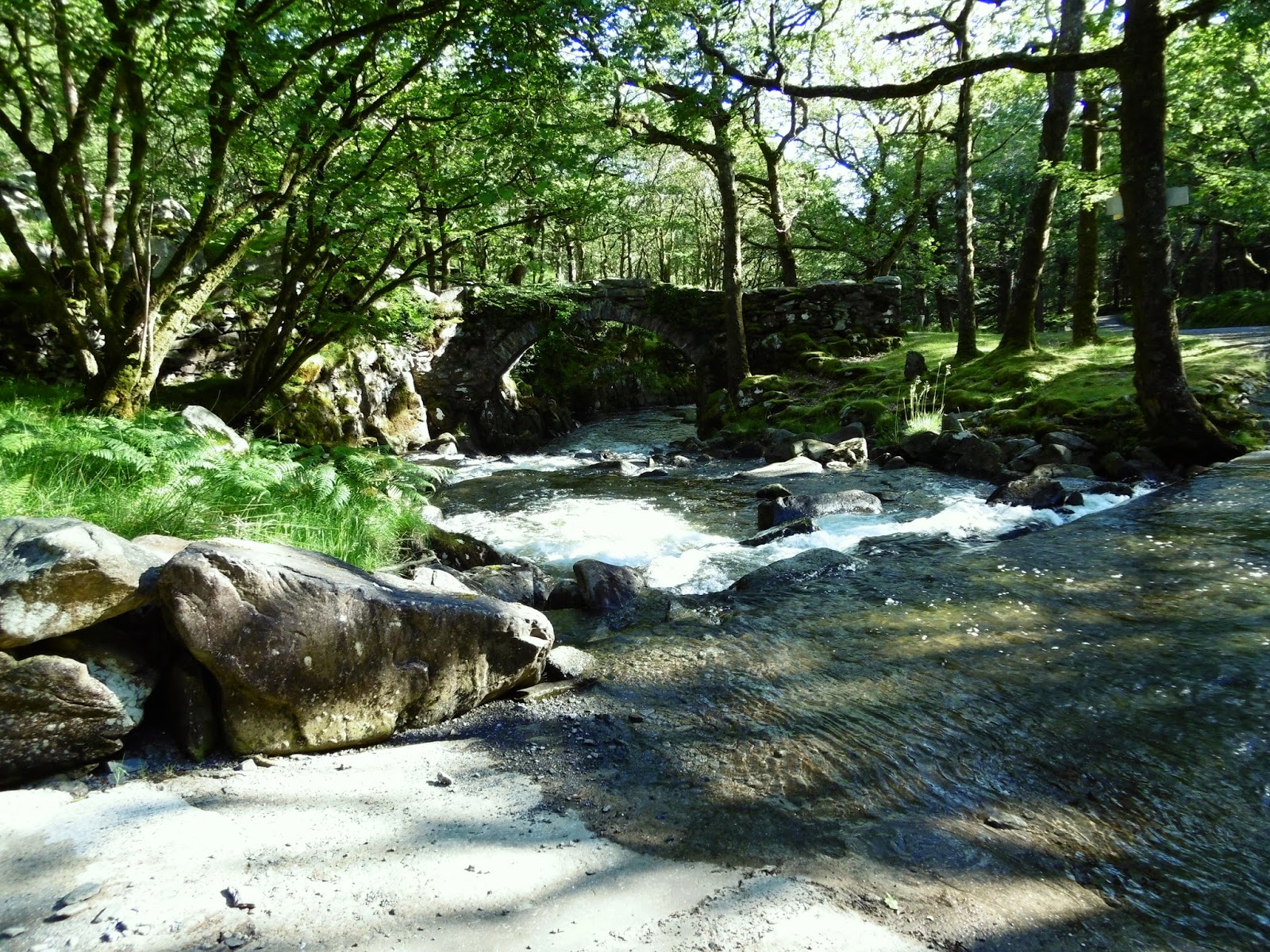 In the early hours of Monday morning, I was woken to a rising wind buffeting the tent. The morning broke to dark, lowering clouds cloaking the higher tops. 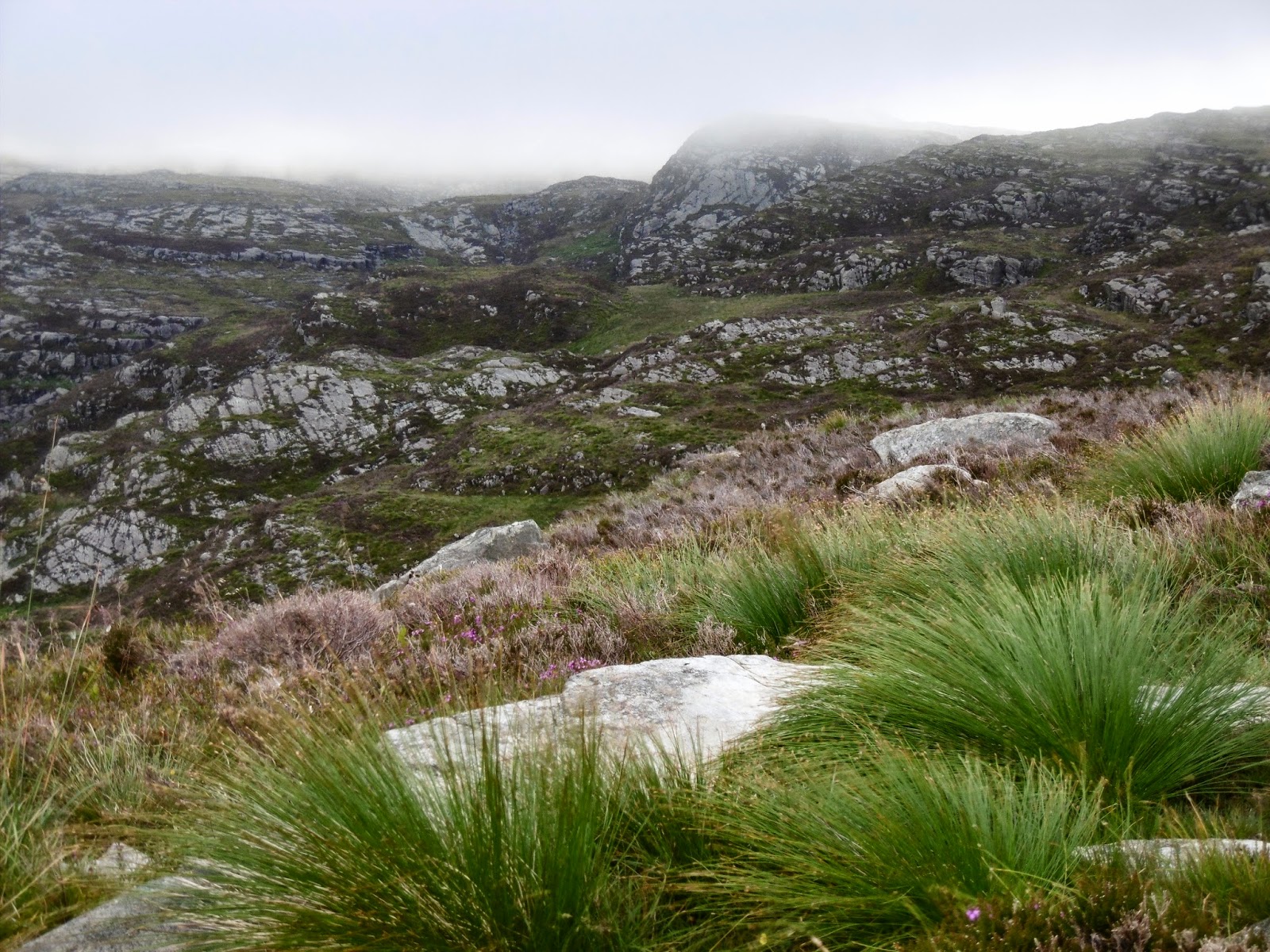 A descent down to the Roman Steps, (actually an old packhorse route) Up and over the top of the pass,a slight descent then a turn off to head up to Llyn Du. The cloud base got lower, the wind stronger and rain  meant waterproofs. The intention had been to head up to the Rhinog Fawr and continue on to Rhinog Fach.
Taking note of the deteriorating conditions, I chickened out. It is a steep ascent up on to the first Rhinog and with no visibility, I gave it best. 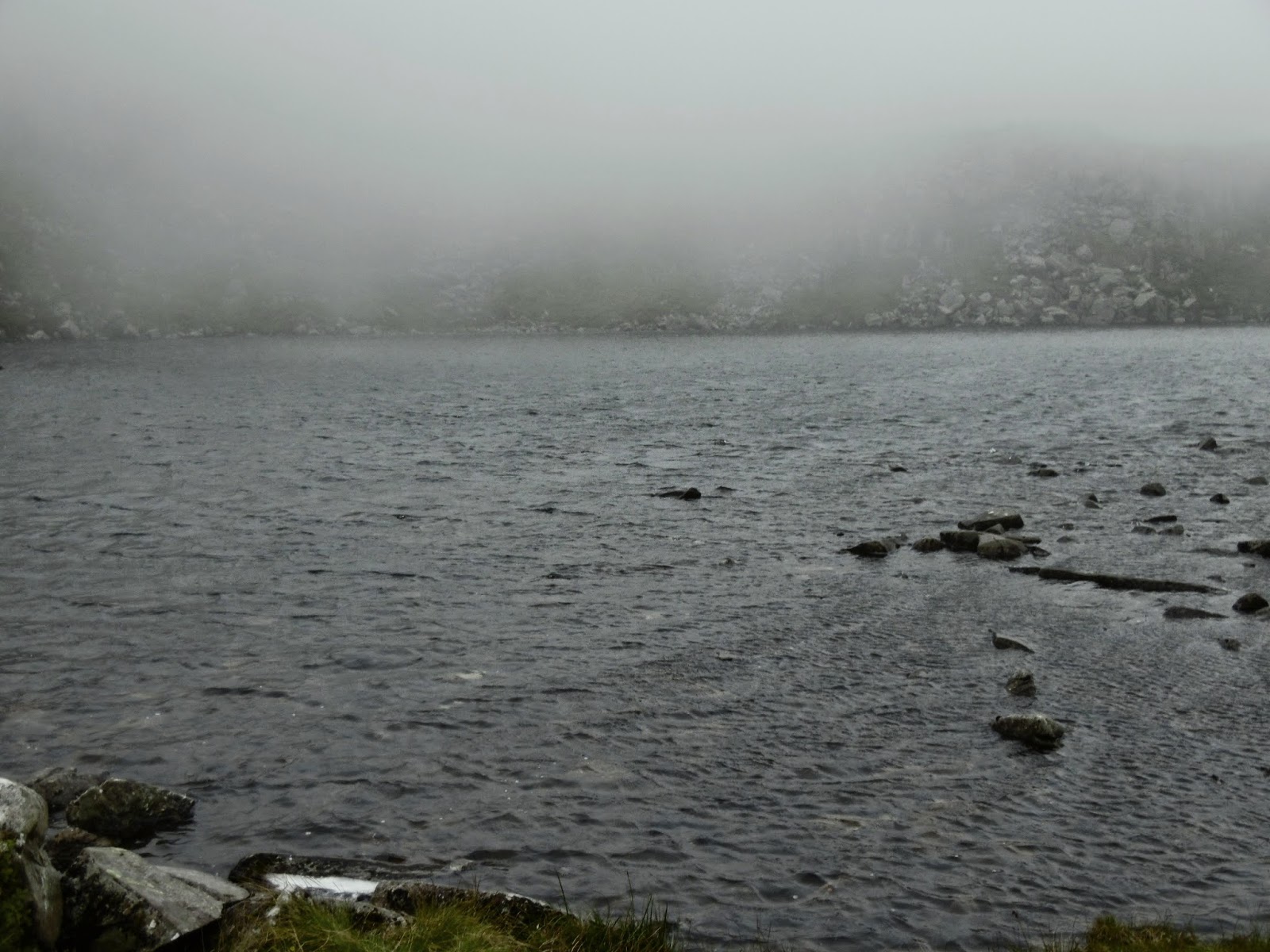 Heading back down the Roman steps, I paused for a break and a ponder. The weather had seemed to ease and wanting to salvage something out of the day, I decided to take an easier route? Thus it was I began heading back up to Gloyw Llyn. The plan was to follow the path that led.over to Nantcol. Worryingly the rain became harder as I headed up. Reaching the ridge above the Llyn I was met by the full force of the wind and rain. Aware that the path I intended to follow was indistinct in places, boggy and with no really suitable places to camp, it was decided that rather than press on in  head winds and rain, I would once again turn tail and head back down, frustrating! 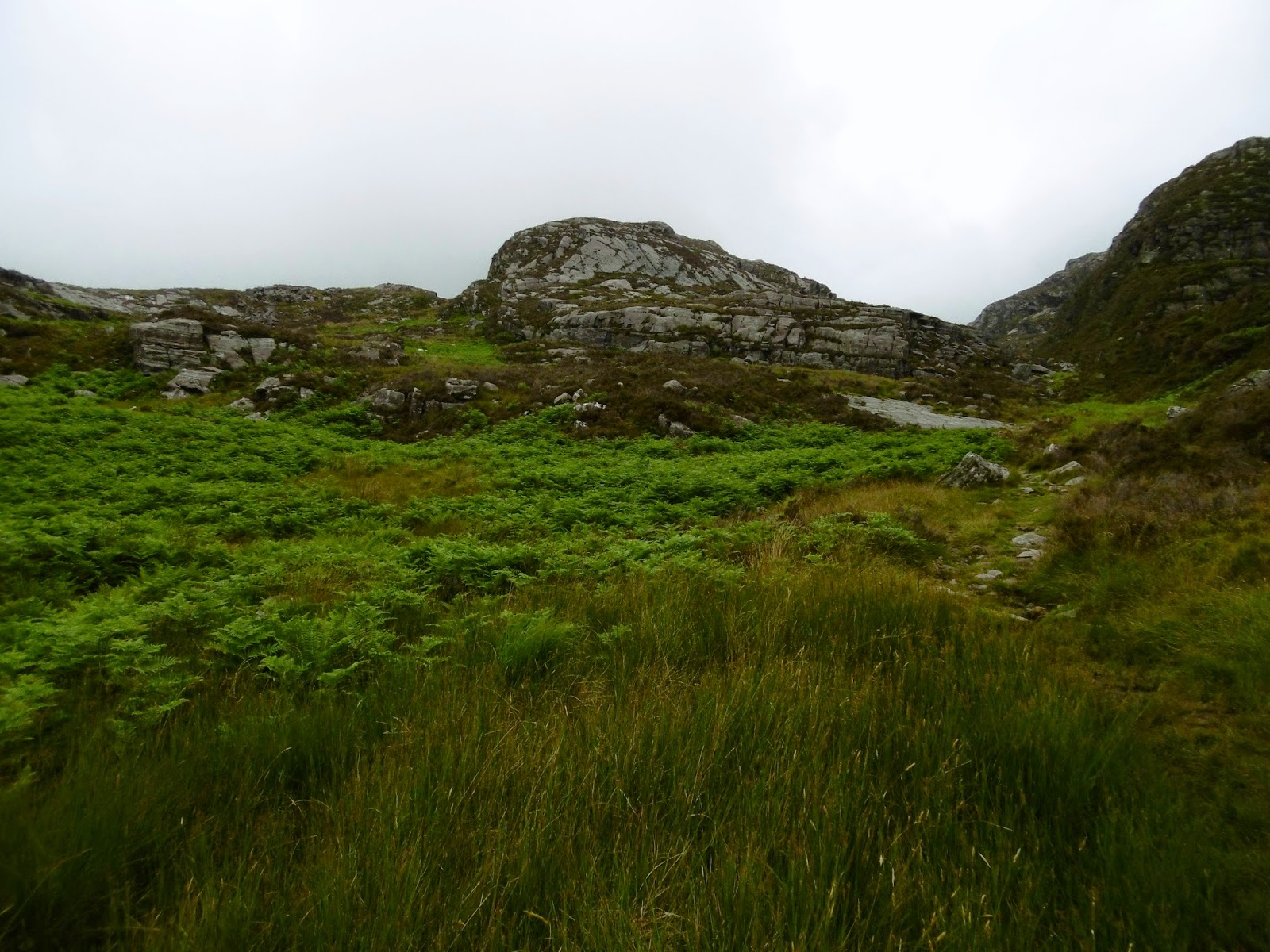 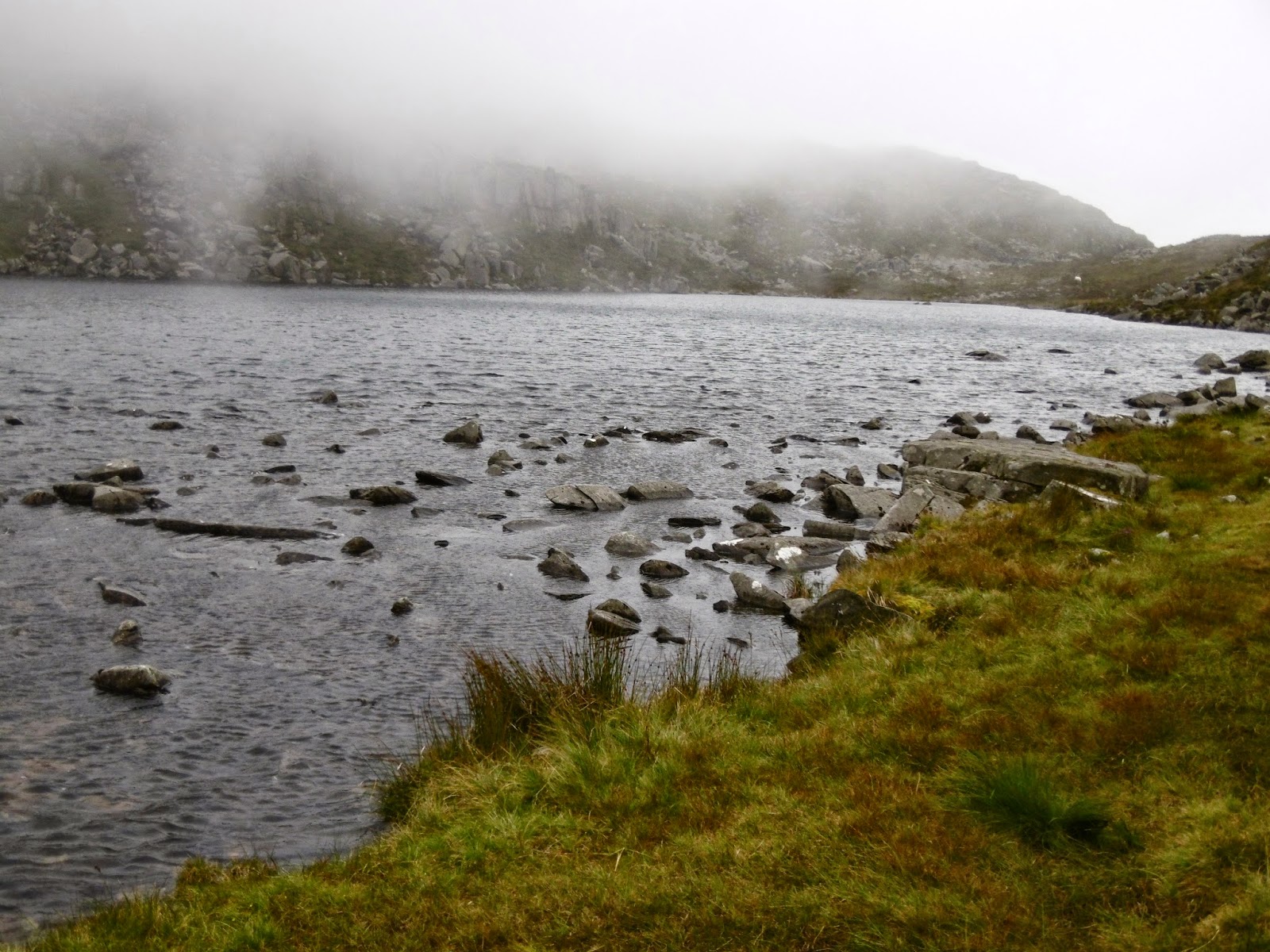 With the wind and rain now gusting up the valley I set up camp in the shelter of the woods above Cwm Bychan. 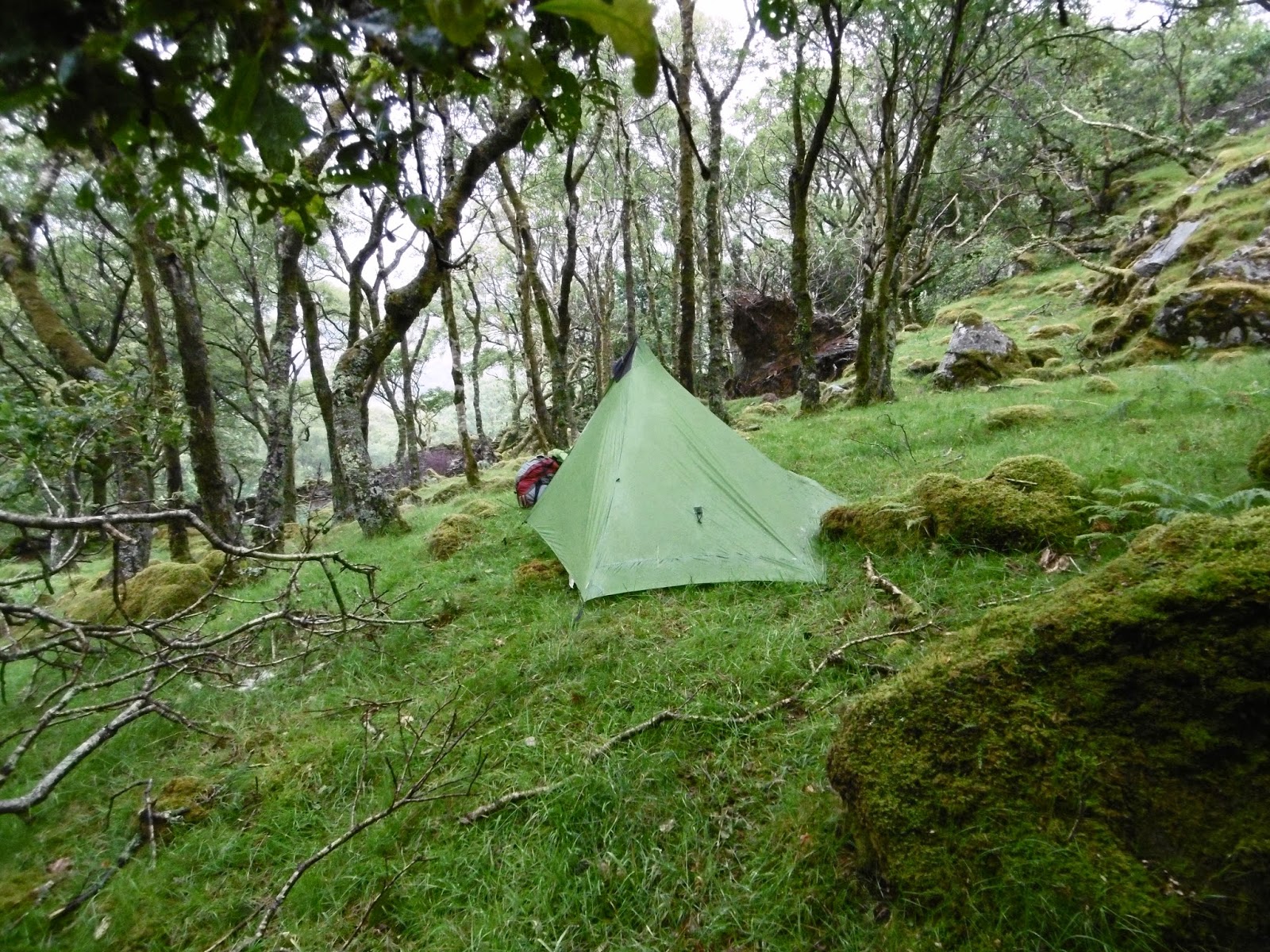 Tuesday promised to be a better day.It was a lazy one too. It consisted of a gentle stroll down lanes, paths and bridleways to Llanbedr and all in glorious sunshine. From there it was a quick run  on the train to Barmouth. Here I met up with Mike. A cup of tea and a bun, a few bits picked up in the local co'op and we headed in to the campsite. JJ and Wendy arrived as we set up camp. They had come with a bijou caravan, very nice too. 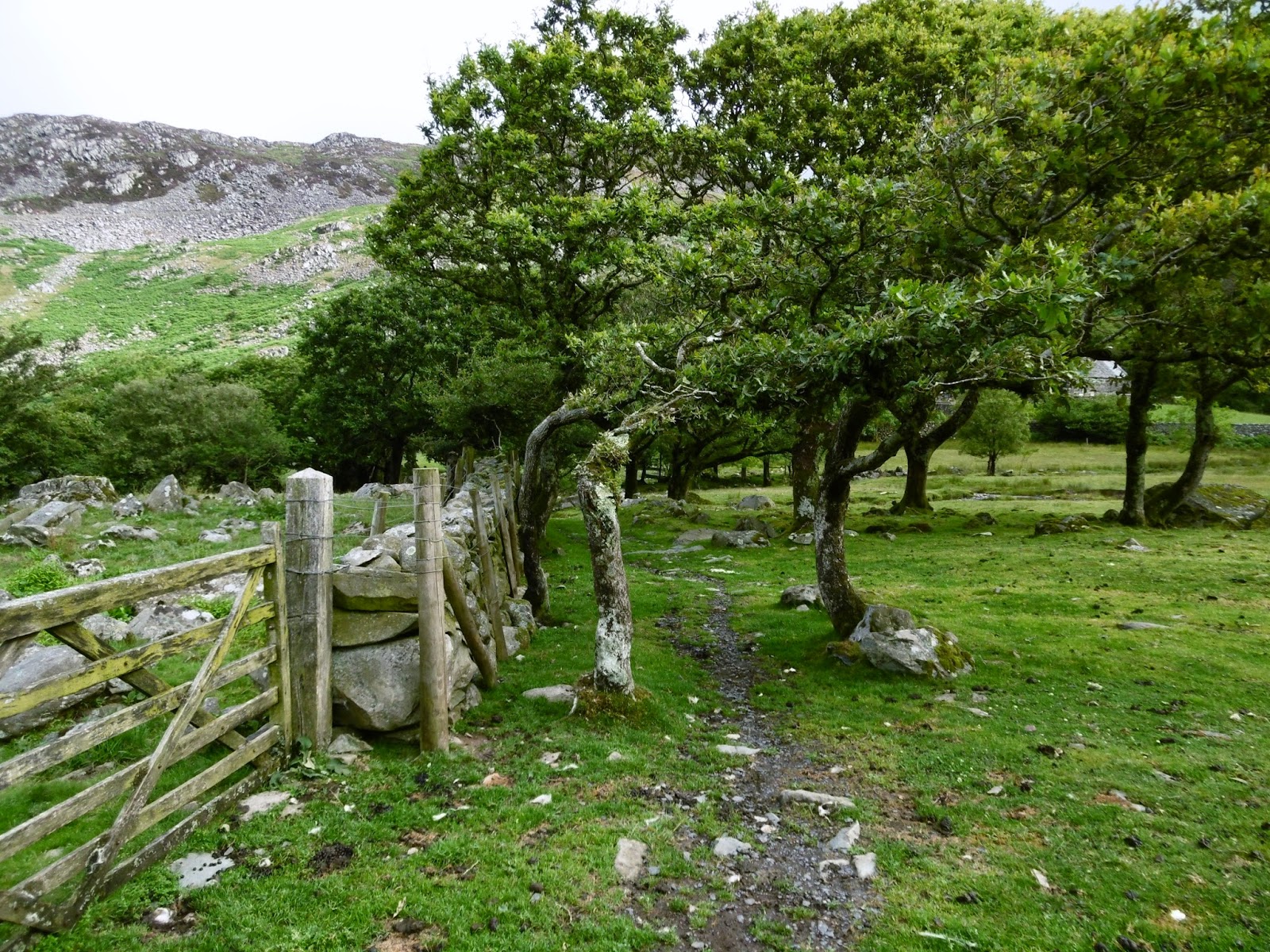 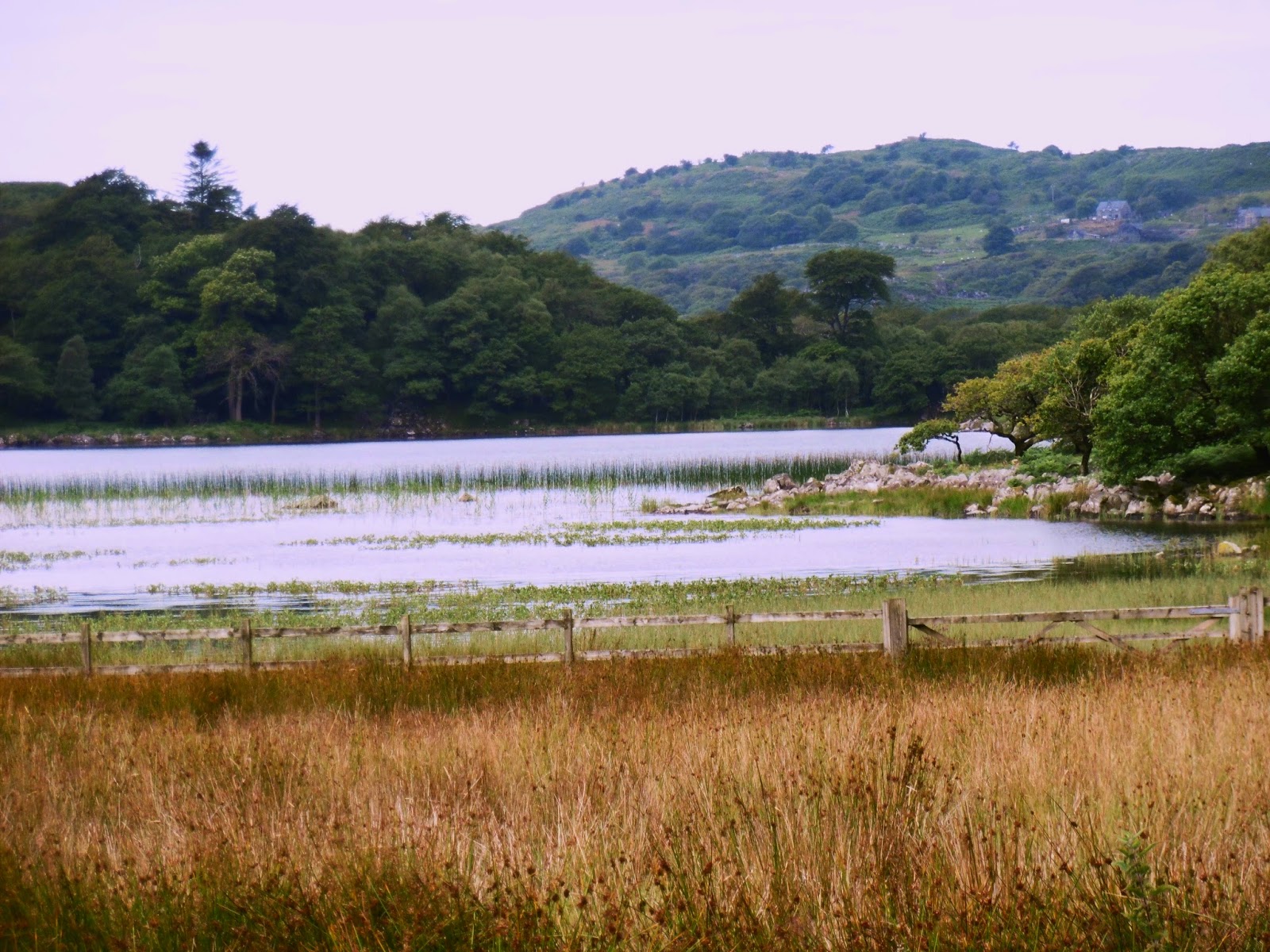 Wednesday saw Mike, JJ and myself  having breakfast in a cafe in Barmouth and then over the estuary to meet up with Alan and two friends. It was a fairly easy days walking along the Mawddach trail, a disused railway that led to Dolgellau. The weather was none too good with low cloud shrouding the surrounding hills and showers of rain which saw us getting warm and sticky in waterproofs.
Our goal for the night was a campsite on the edge of town. Here we where joined by Laura and Judith. The evening became dry, warm and pleasant. 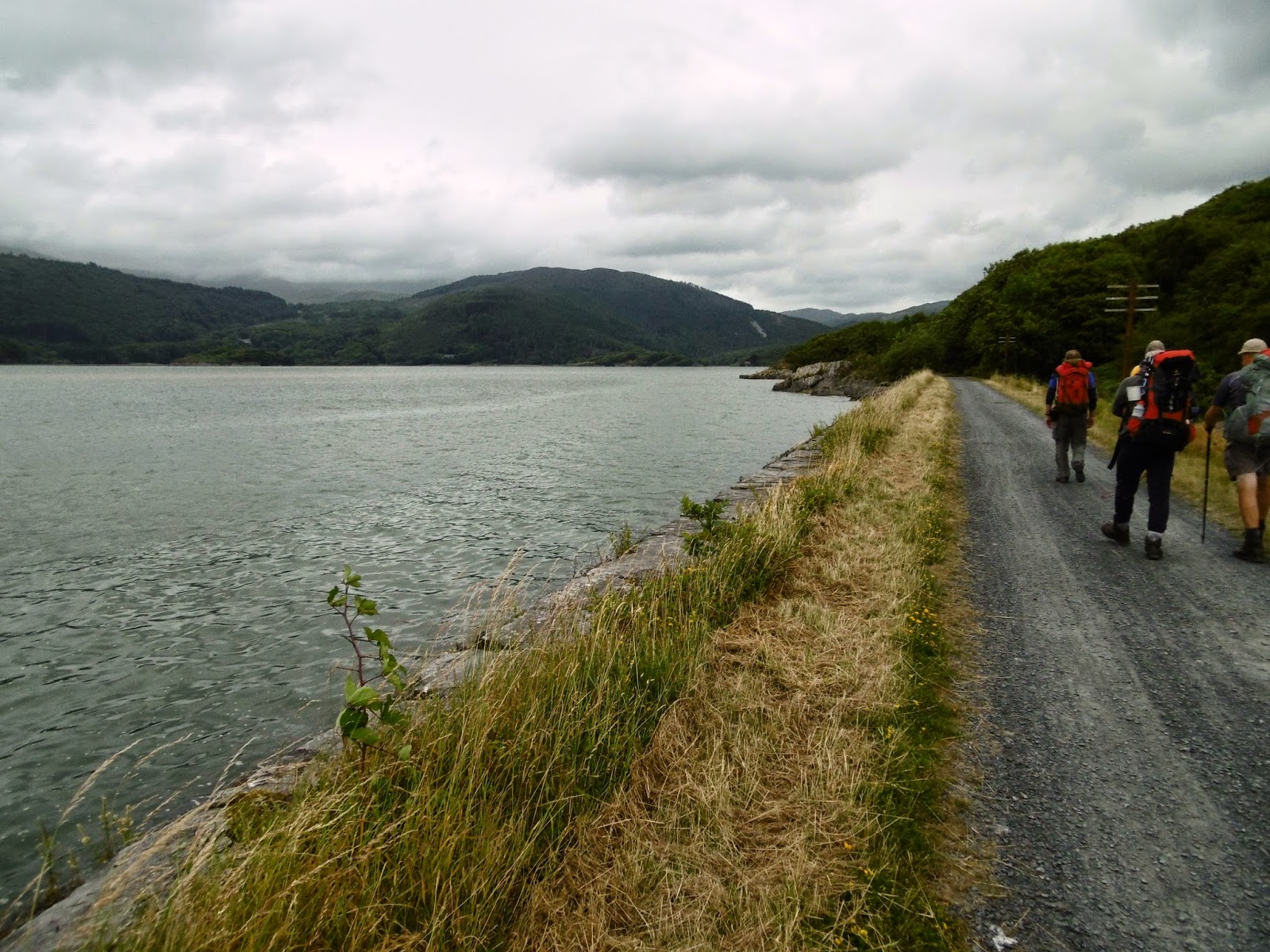 Thursday morning was dry and sunny. From the outset it was warm and  became hotter as the day progressed. Our proposed route for the day involved much uphill walking. At first a steep lane leading up toward Bwlch  Coch. Then it was footpaths leading ever upwards. A stop for a break and then a decidedly steep and somewhat arduous path on loose ground leading  up to Mynydd Moel. All where very glad to reach the summit cairn. 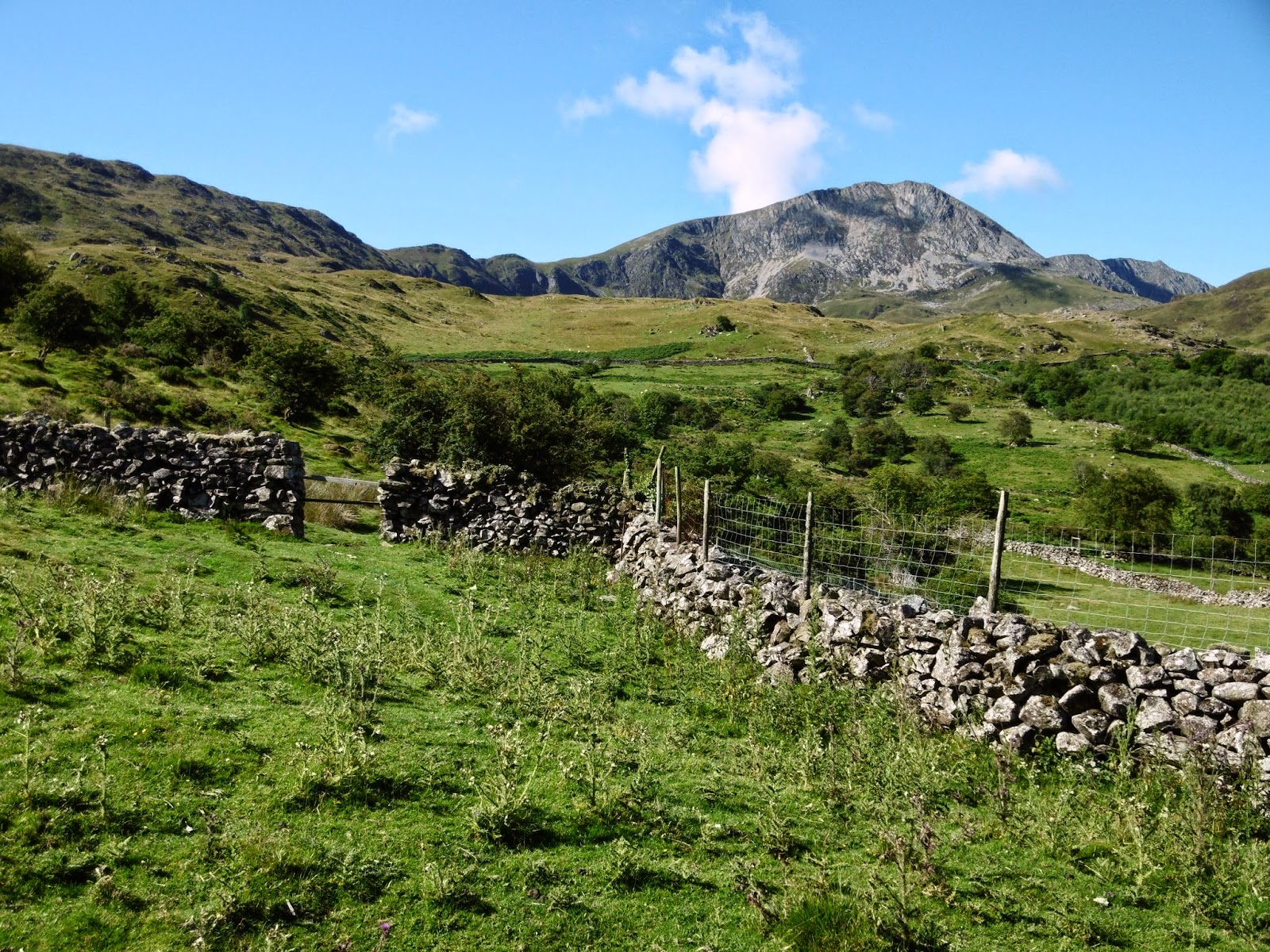 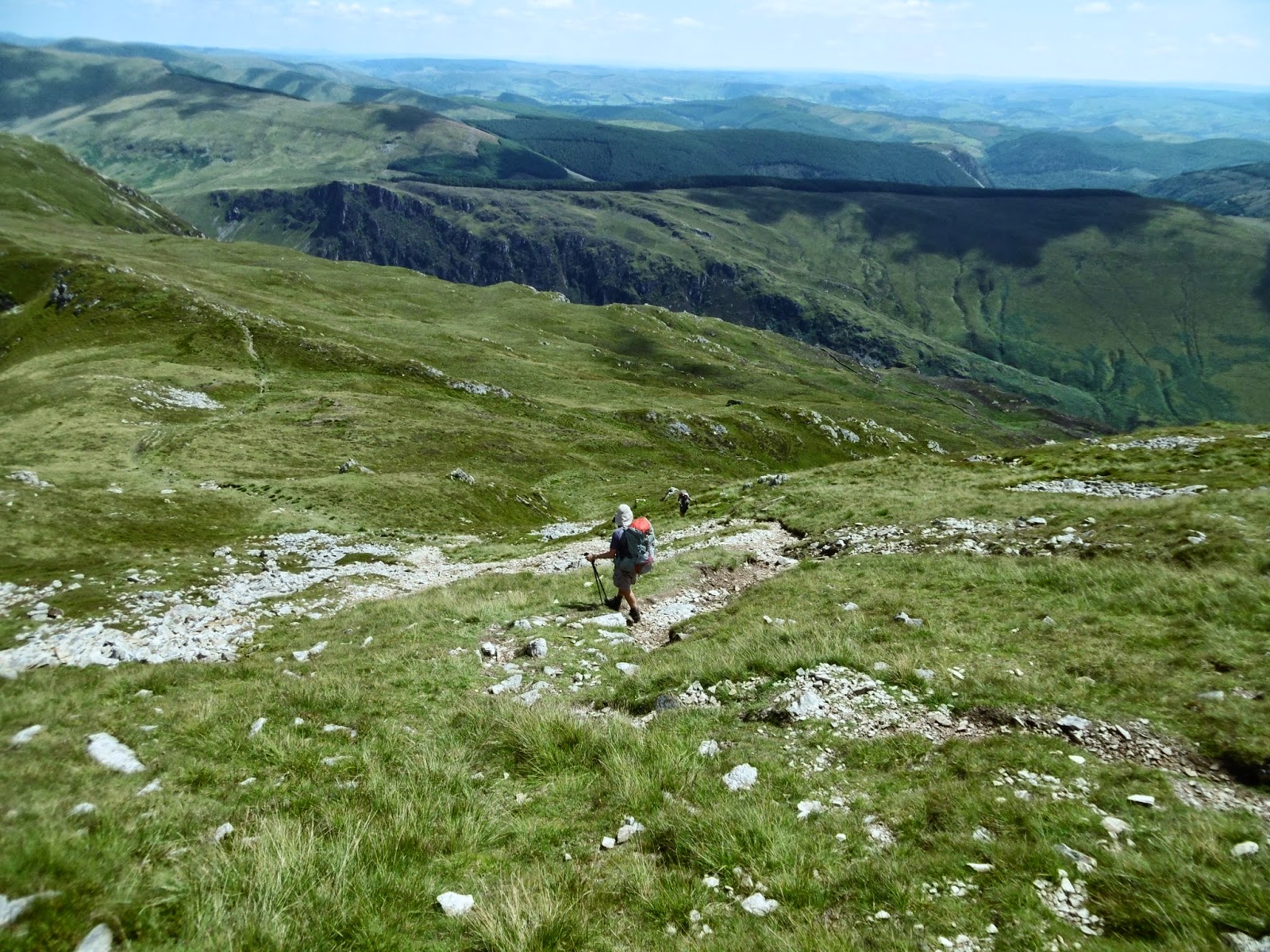 .
Still heading up but on gentler ground, we made our way over to Cadair Idris itself. It is quite amazing the number of folk making their way up and finding the going difficult on the rocky terrain surrounding the summit. Many not even carrying a day sack and dressed in just shorts and tee shirts. Our group looked positively over equipped. Although lightly clad we where fully prepared for a night out, had waterproofs and all the normal gear needed for hill walking, map, compass, first aid kit etc. Mind, it was good to see so many young people making the effort. It is just a pity that nobody has given them a nudge in the right direction.
As we descended the pony path a small spring was found and we where able to fill up with fresh water. Lower down we set up camp on on a grassy area. Much convivial chatter and socialising after a fairly strenuous day on the hill.
During the night the wind rose to gale force. The tents where in an exposed position and bore the brunt of the strong wind. In my own tent I lost a couple of tent pegs. This was somewhere around two thirty in the morning. Mike, out placing rocks on his tent pegs, saw my light and came across to see if I was alright. Judith was up too and Laura had her stuff packed. Rather than try and find my lost tent pegs, the tent was dropped with stones placed to stop it taking off. Then it was over to Mike's atko to wait out the rest of  the night.
At first light I went back over to my tent, found the lost tent pegs and re erected the tent. 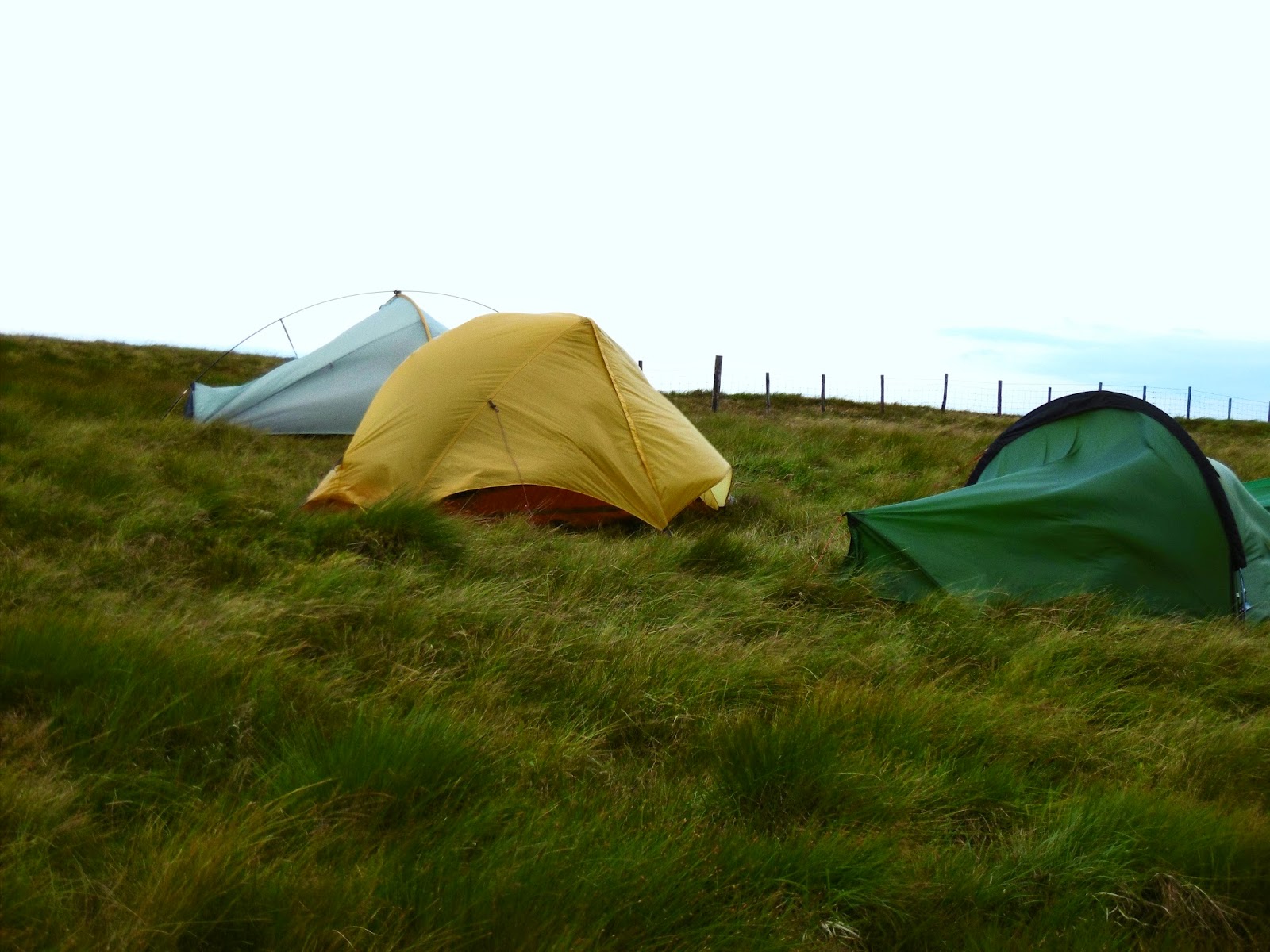 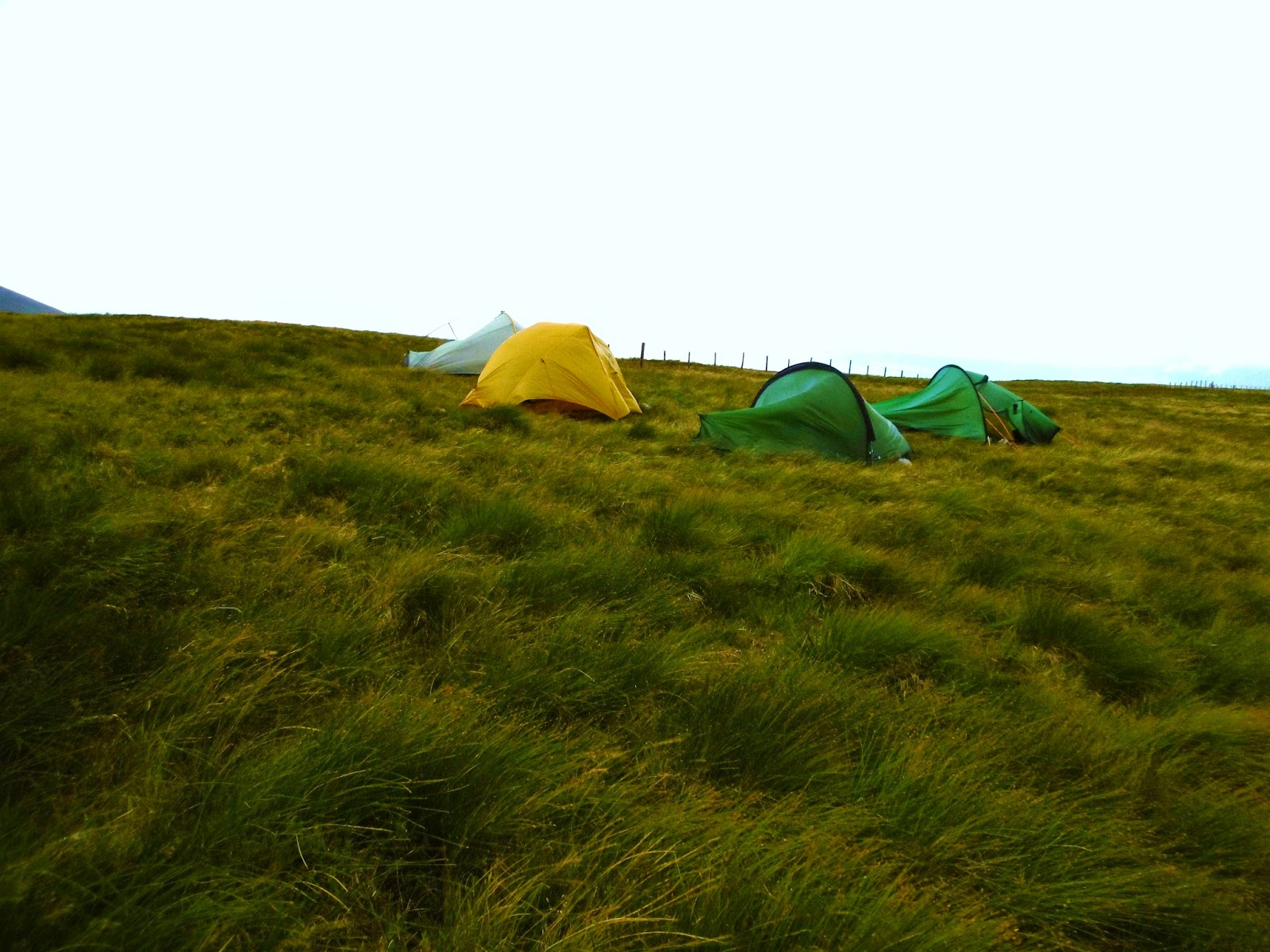 Given the conditions, we made an early start, pausing on the way at  a sheep pen for a spot of breakfast. It was then a circuitous route back toward Barmouth. Mike headed off to bag a couple of tops. It was tempting to go with him but I was tired and unsure if I could manage any steep tops. 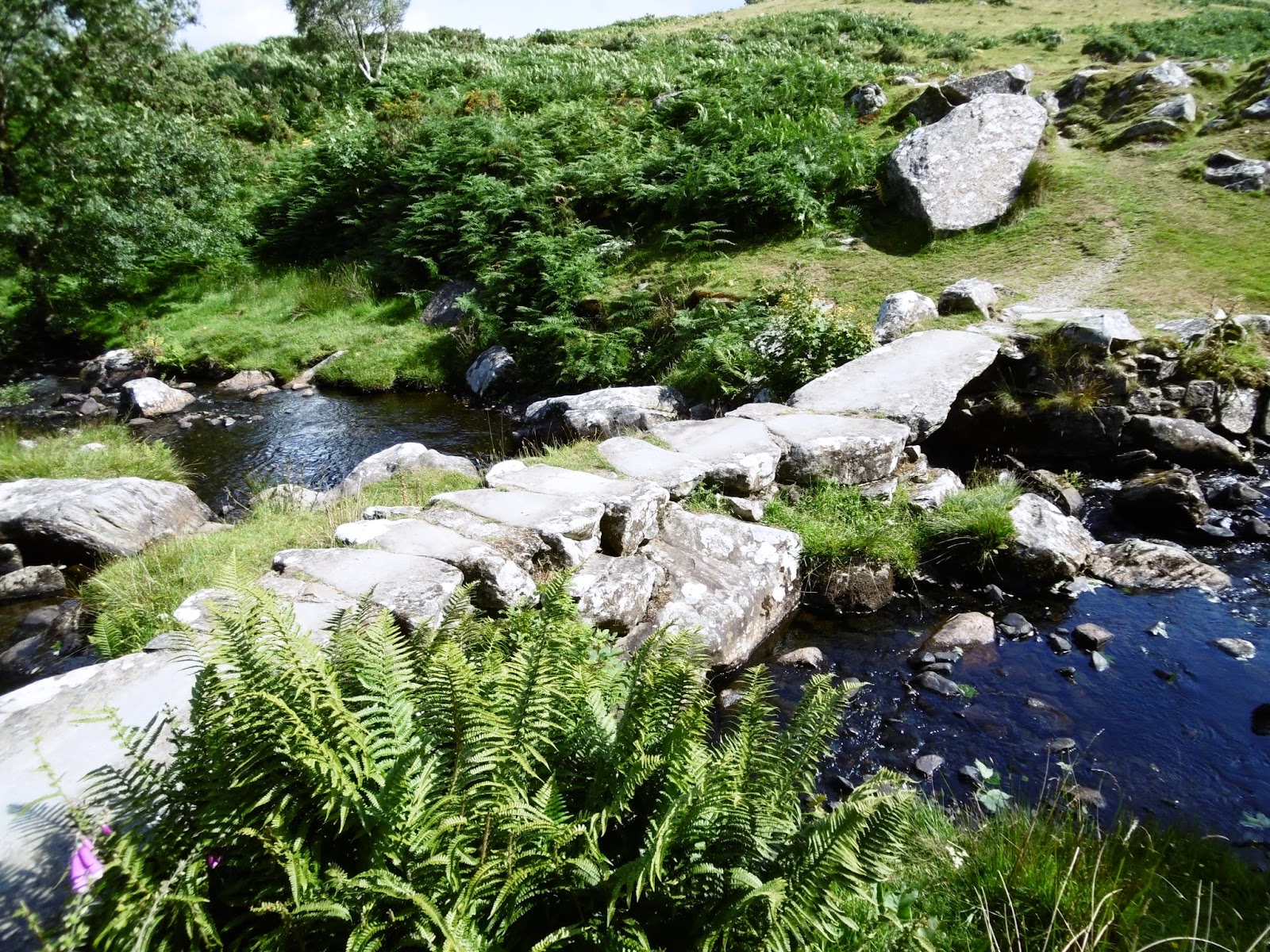 Alan, Judith and Alan's two friends turned off at their campsite while Laura, JJ and myself carried on over the estuary in to Barmouth. We treated ourselves to cold drinks, picked up a few bits in the Co'op and headed on to the campsite
A pleasant few days walking. The weather was mixed but that goes with the territory. 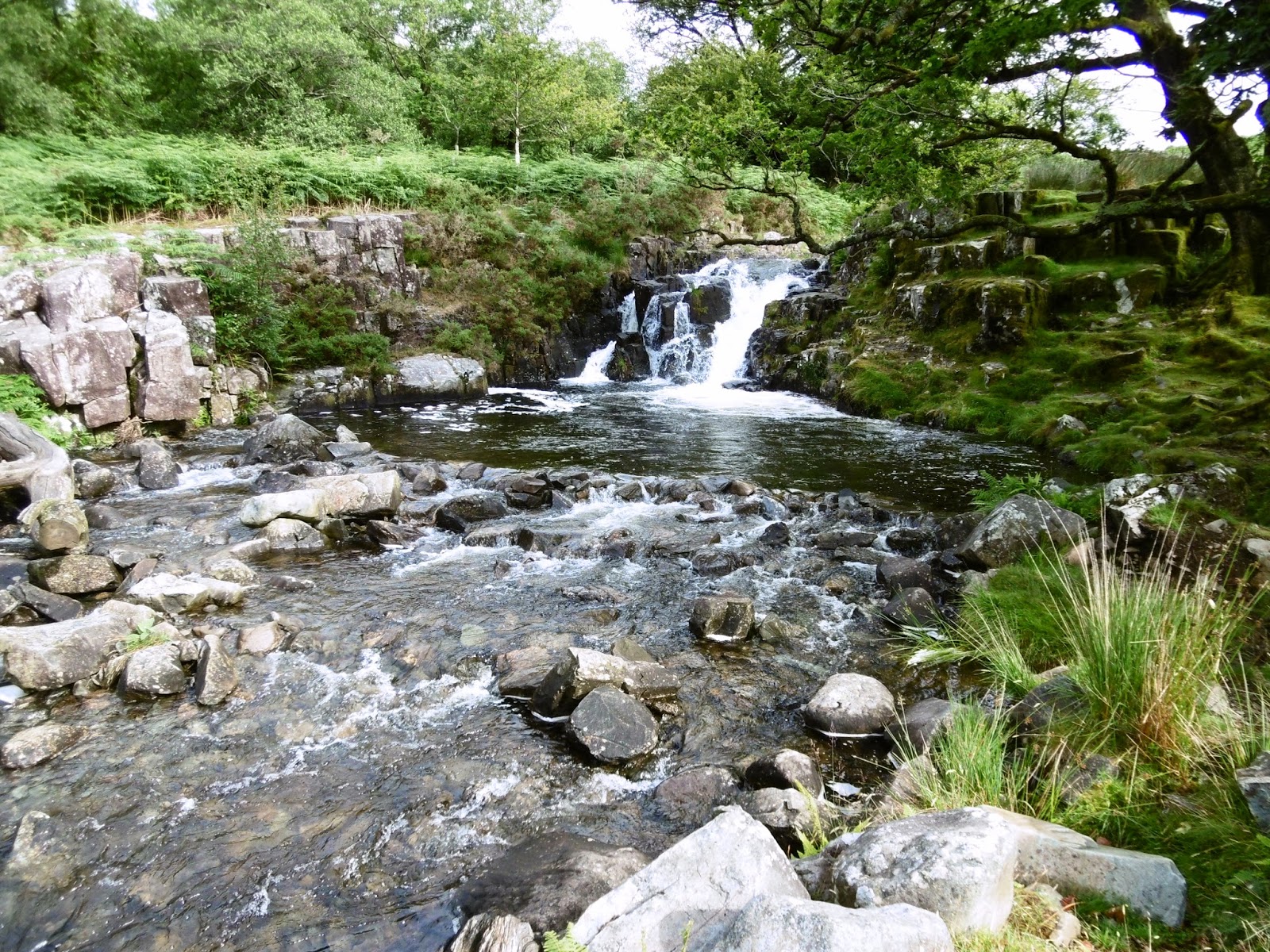 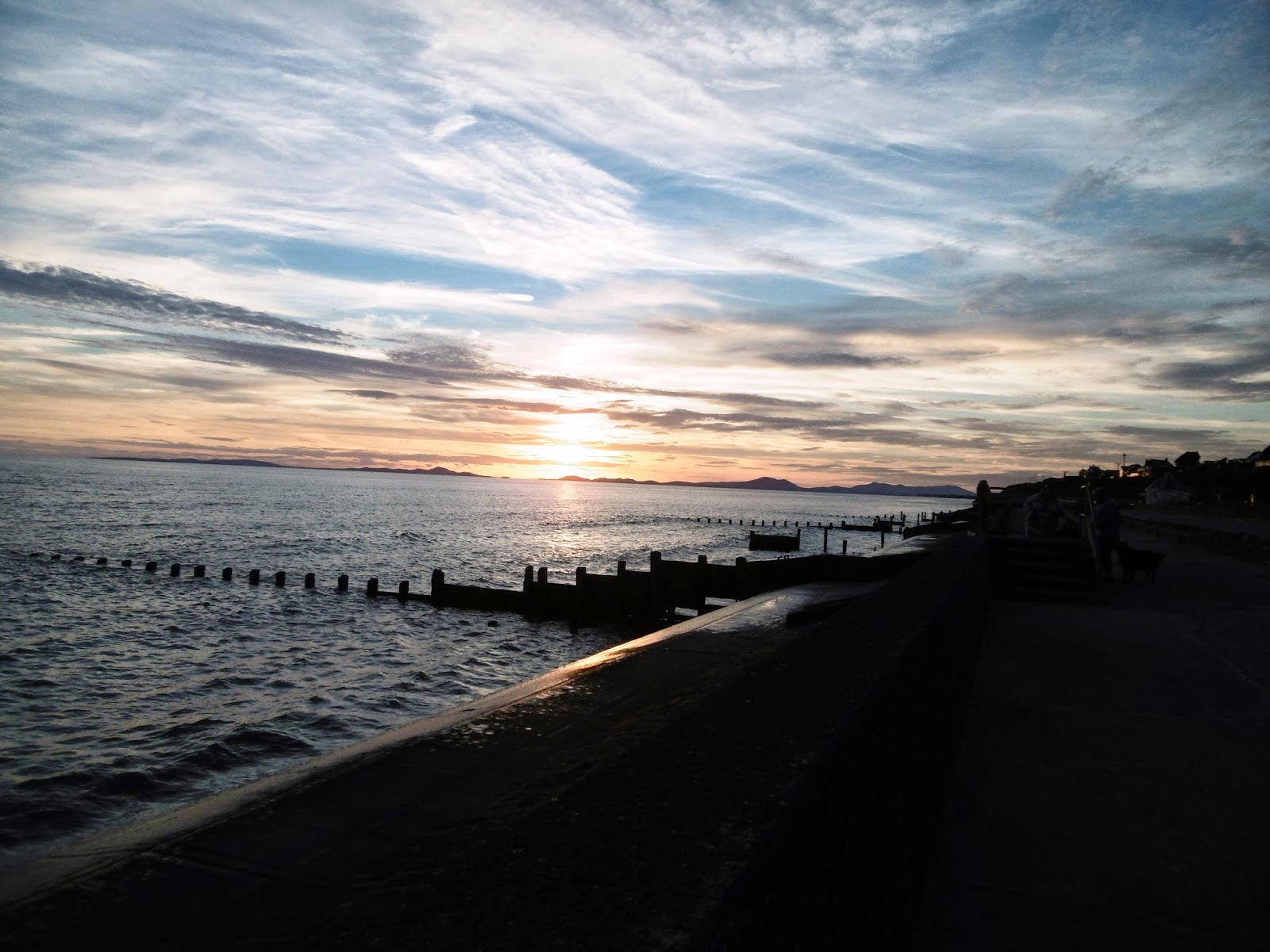 Addendum
Re the  tent I was using, this was babe, a Six Moons Lunar Solo.This was the second time I had used it on a week long trip. prior to that it had only been used a few times. It is a single skin tent with a built in floating groundsheet and full mesh front and erects on a single trekking pole. Setting up is easy, place three pegs, slip in pole and place in the remaining three pegs. Inside there is plenty of room for one. Weight wise it comes in at twenty four ounces, (around 680 grams)
Downsides? Obviously, like all small tents condensation can be a problem. A small micro towel to wipe the tent down works fine. The tent dries out rapidly. It does billow in strong winds. A guying point half way up the rear panel would solve that problem. Closing the tent down is a faff. The front panels are awkward to set correctly. On the night of the big gale the tent became unstable. This though was down to my own mistake. The tent pegs ought to have be been weighted down with rocks earlier. As it was two pegs came adrift and I dropped the tent for safety. Later, having found the two pegs I re erected the tent with no real problem. It is though, at best, a three season tent. If I knew I was heading in to bad weather something a little sturdier would be preferred.