It was a beautiful sunny morning. Really I ought to have been finishing the painting in my living room. Instead I hopped on a bus to Whitley Bay and walked back along the coast to Blythe. The sunshine had brought out the dog walkers in their droves. it seemed as if I was about the only person dogless. Even joggers had dogs in tow. Mind, I had several dogs keen on joining me as I walked along the tide line. The majority of the dog walking fraternity seemed a friendly bunch though, most giving a smile and a friendly 'good morning'. 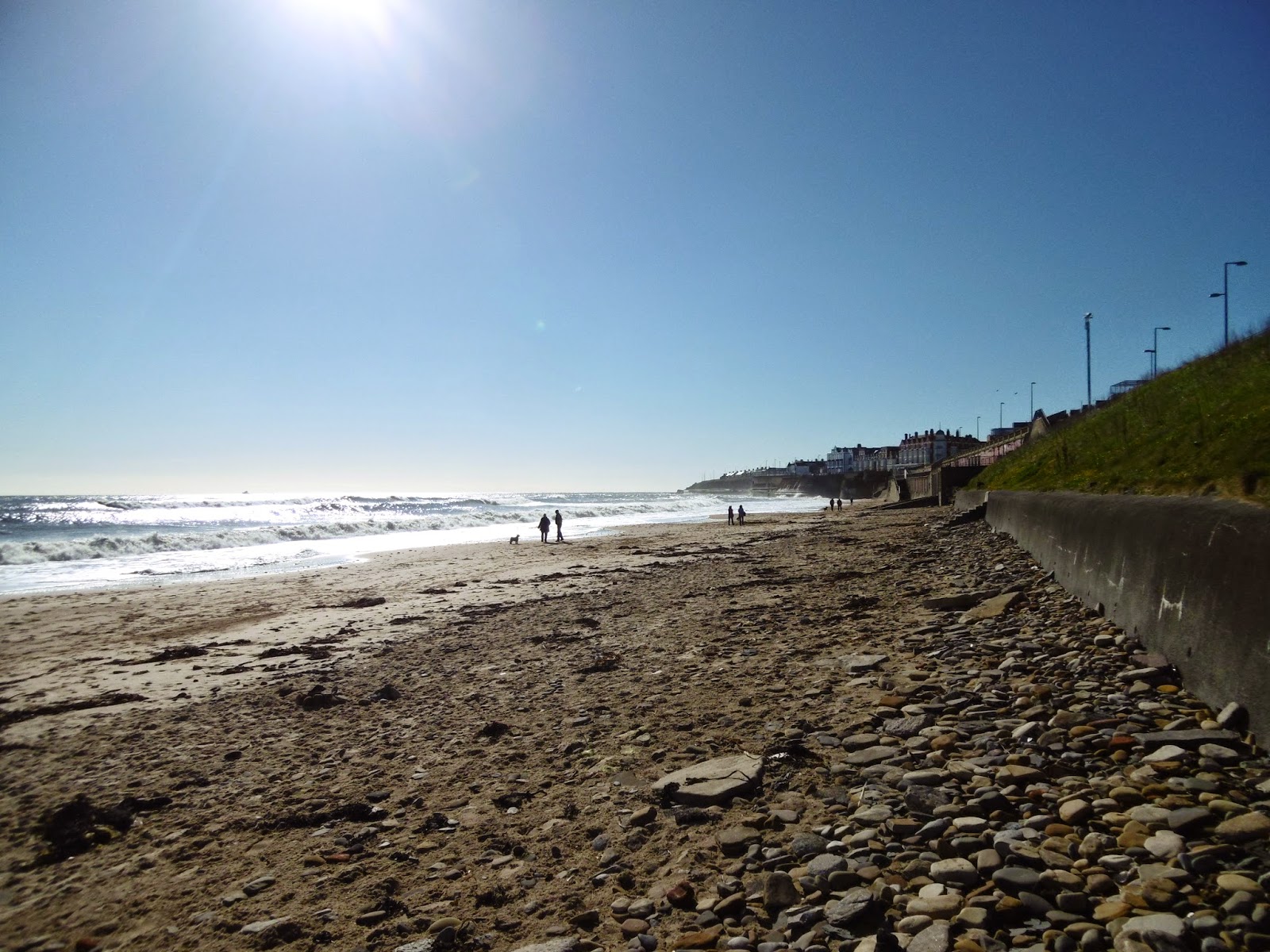 Quite a surf was running, but the morning was pleasant. 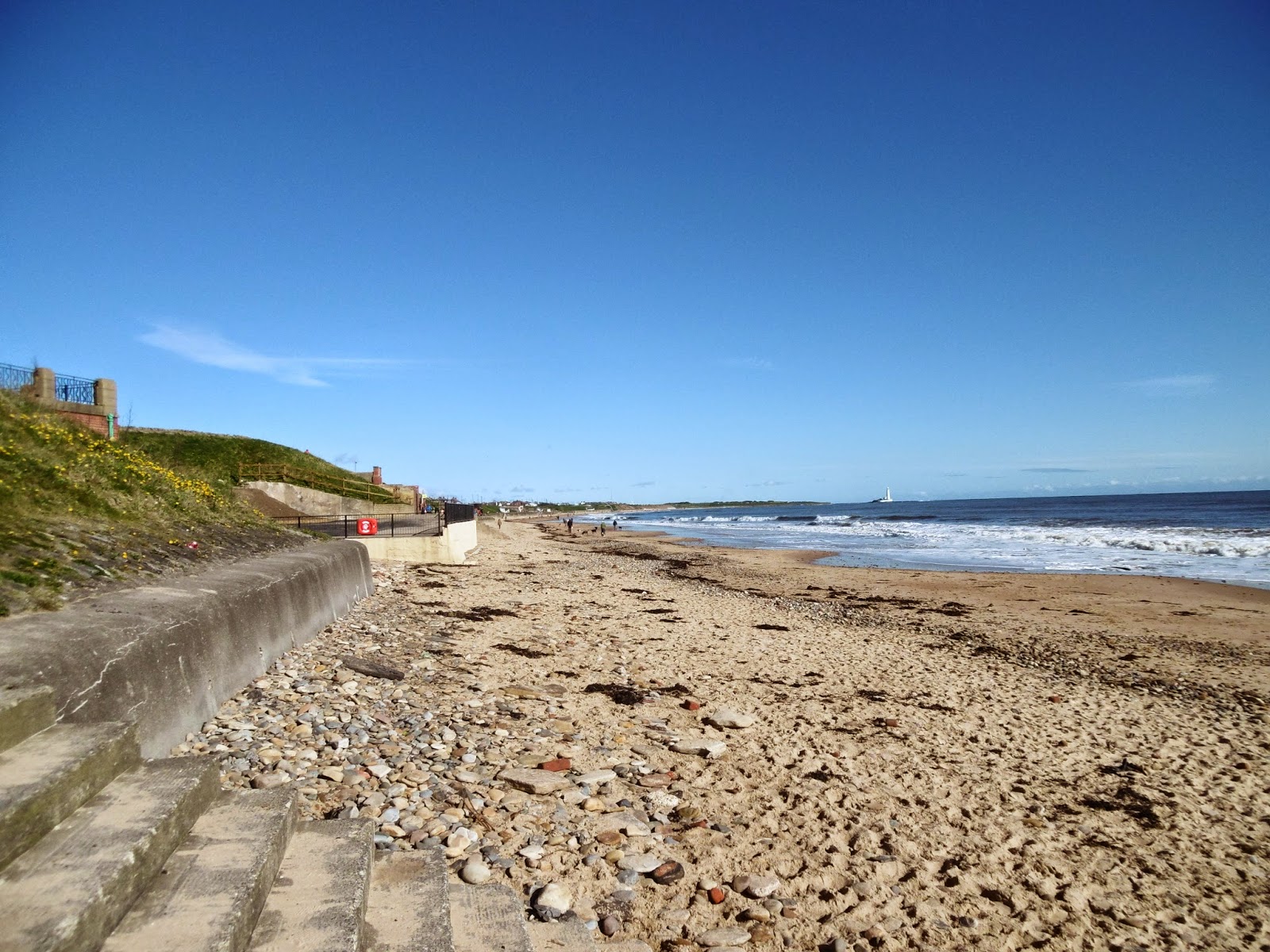 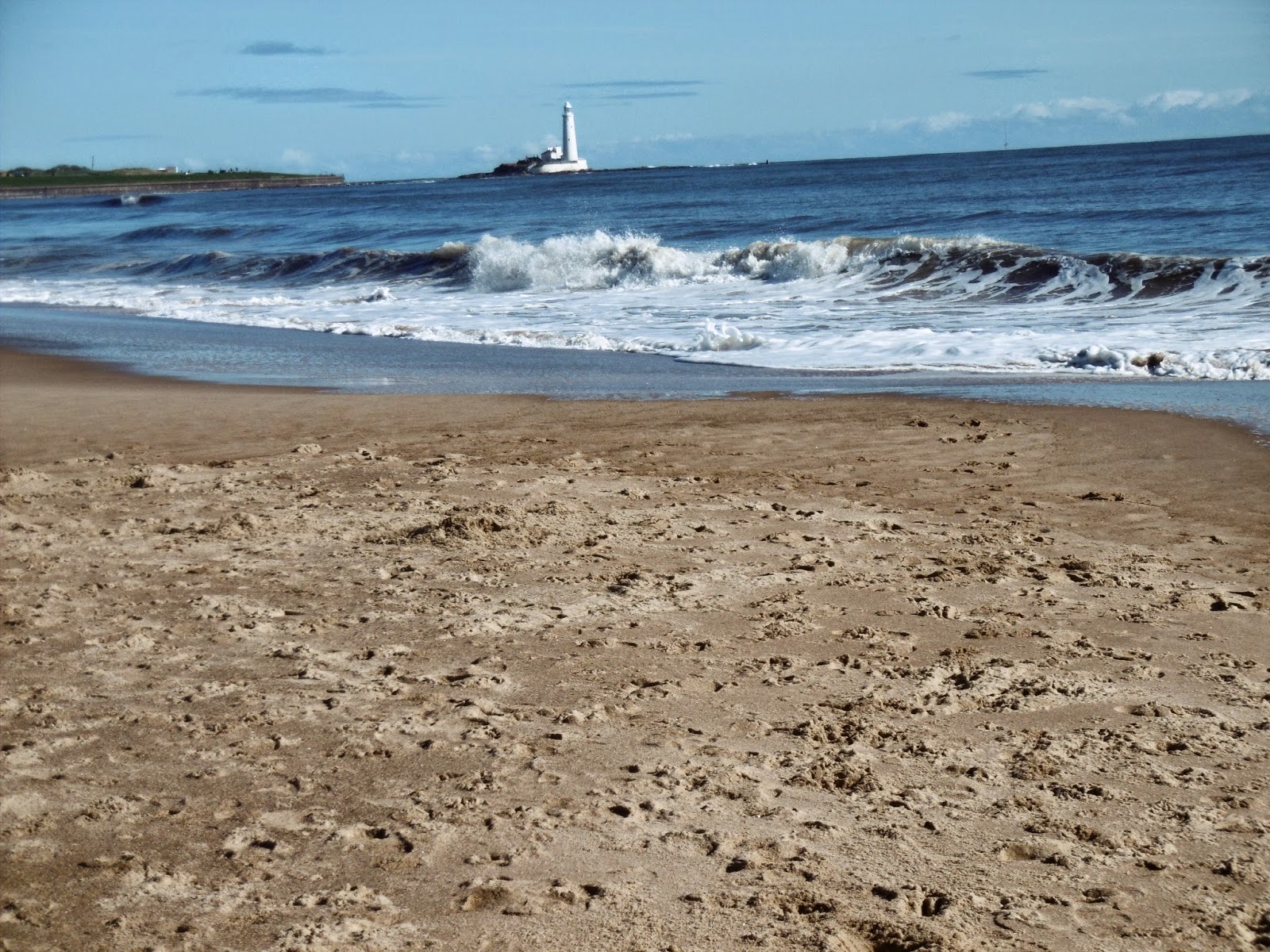 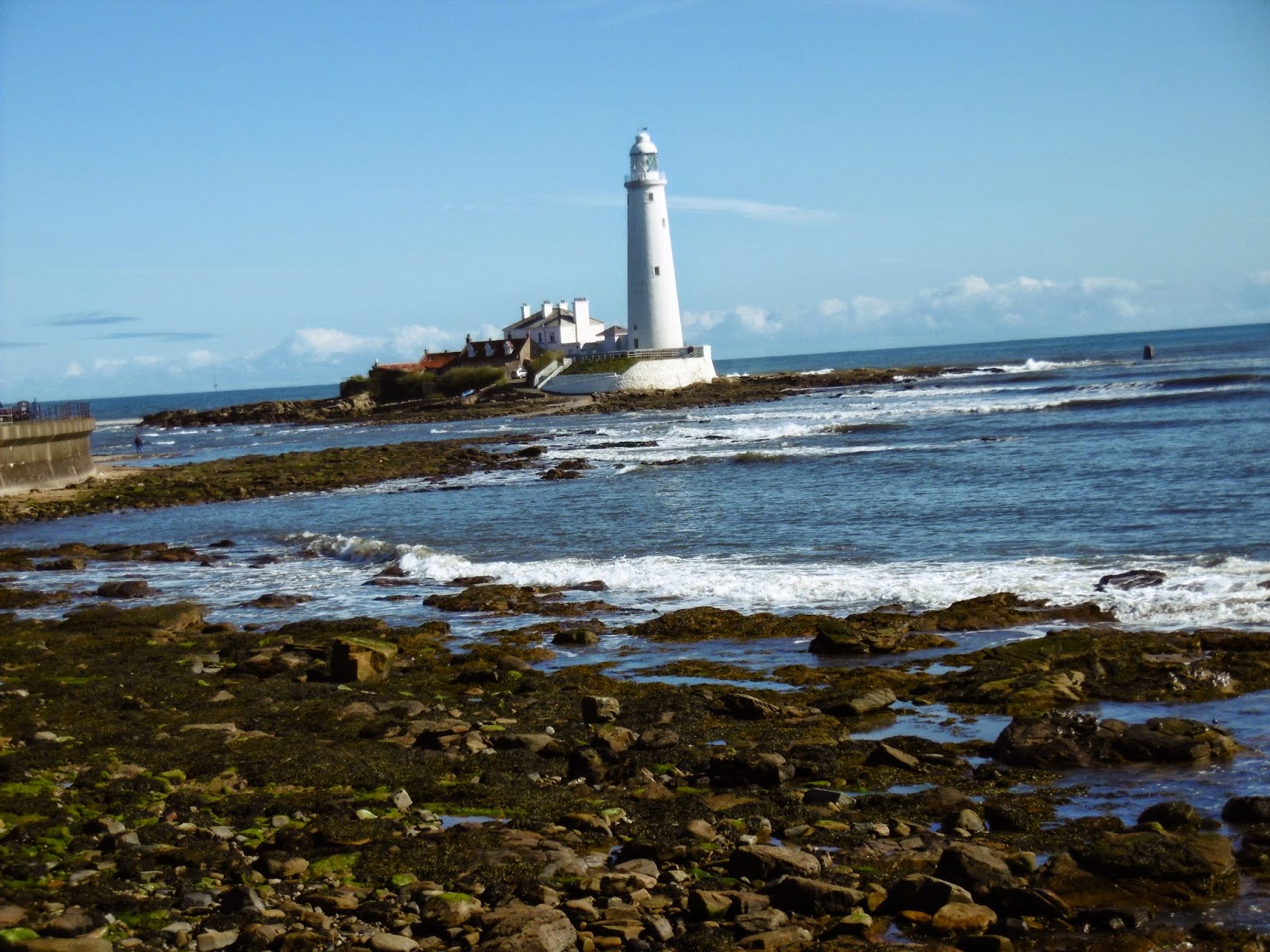 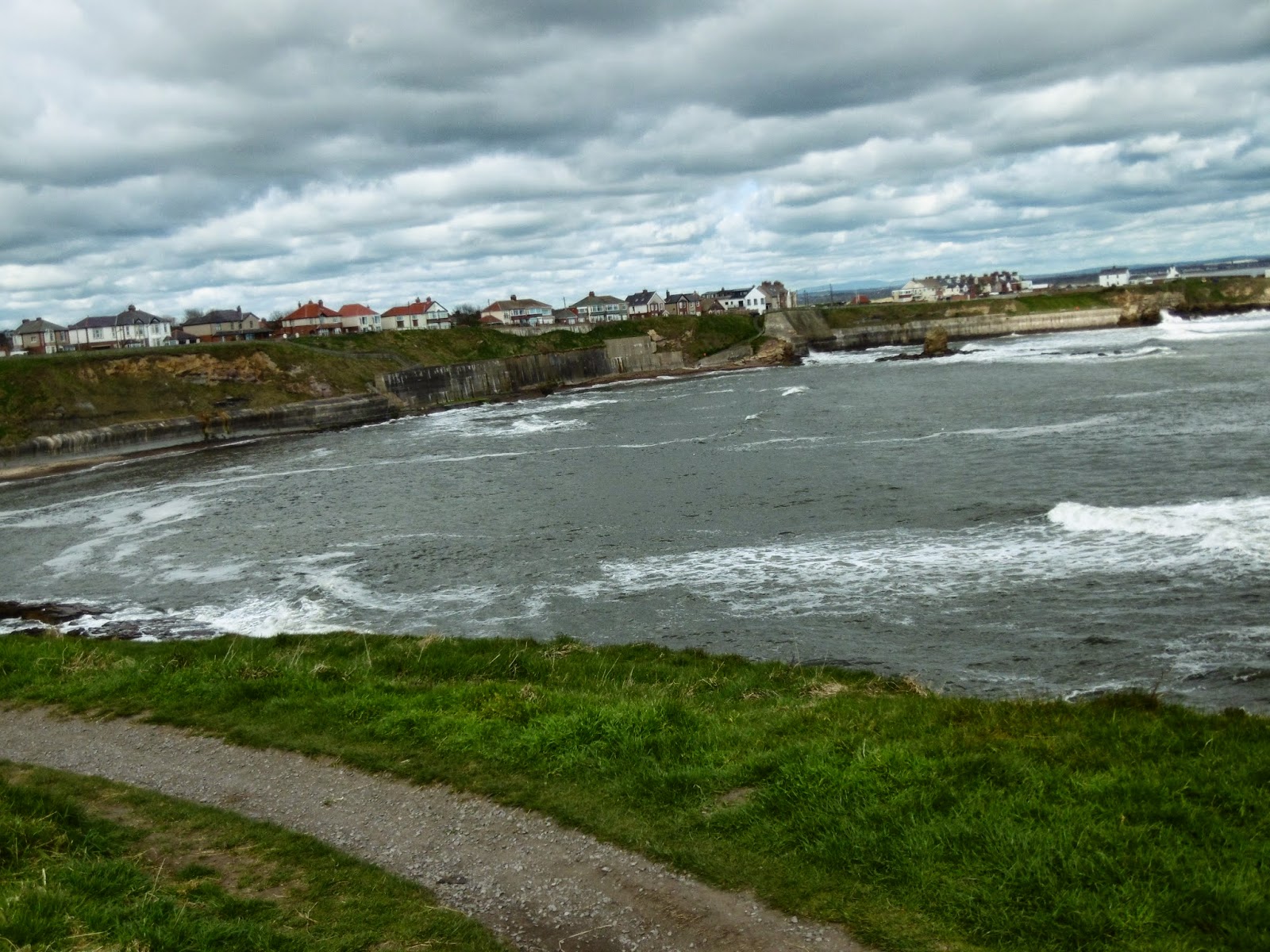 One slightly annoying factor was on some of the paths quite a few cyclists,several riding at speed, seemed unable to comprehend that pedestrians where also using the same bit of ground. One girl, approaching from behind, almost side swiped me and there where a few other near misses too. Some of the dog walkers had the same problem. 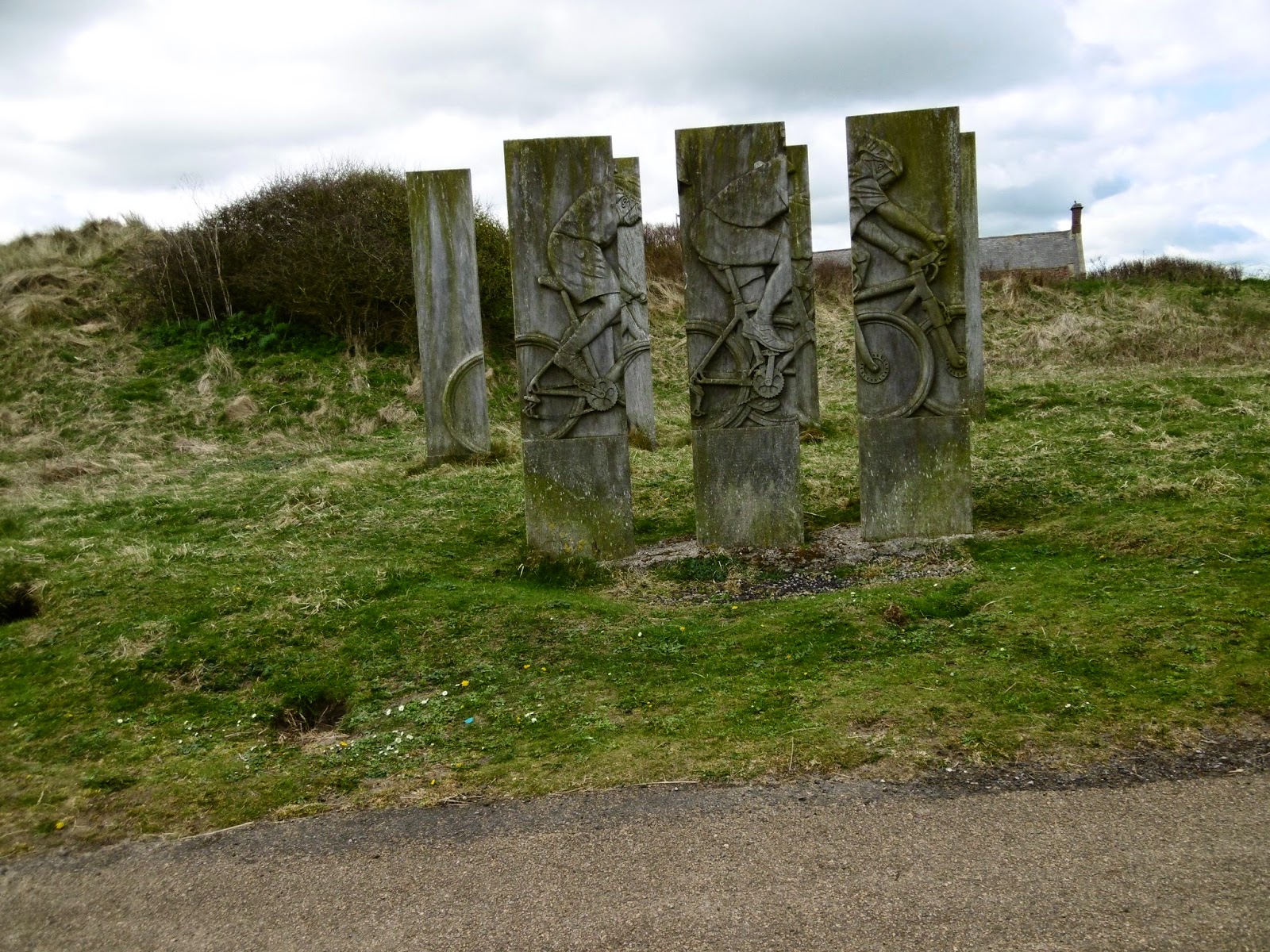 Overall it was a good walk and put a few needed miles in to the legs.  Roughly it worked out on average around eight miles.
Posted by Dawn at Sunday, April 26, 2015 6 comments: Links to this post

A delightful day, the sun shone, the birds where singing and we where in shirt sleeves, awesome! Mike, (northernpies.blogspot.co.uk) had his eye on a top just north of the market town of Rothbury. The path out of the town involved a degree of steep upness. The views when we arrived by the radio mast high above the town made the effort well worth while. Following a well defined track that contoured around the hillside we investigated a hill top with a cairn marking  the remains of a small burial chamber. A study of the map indicates that these prehistoric folk where industrious and versatile people. Ancient forts, settlements, standing stones, cairns and so forth abound throughout the countryside. 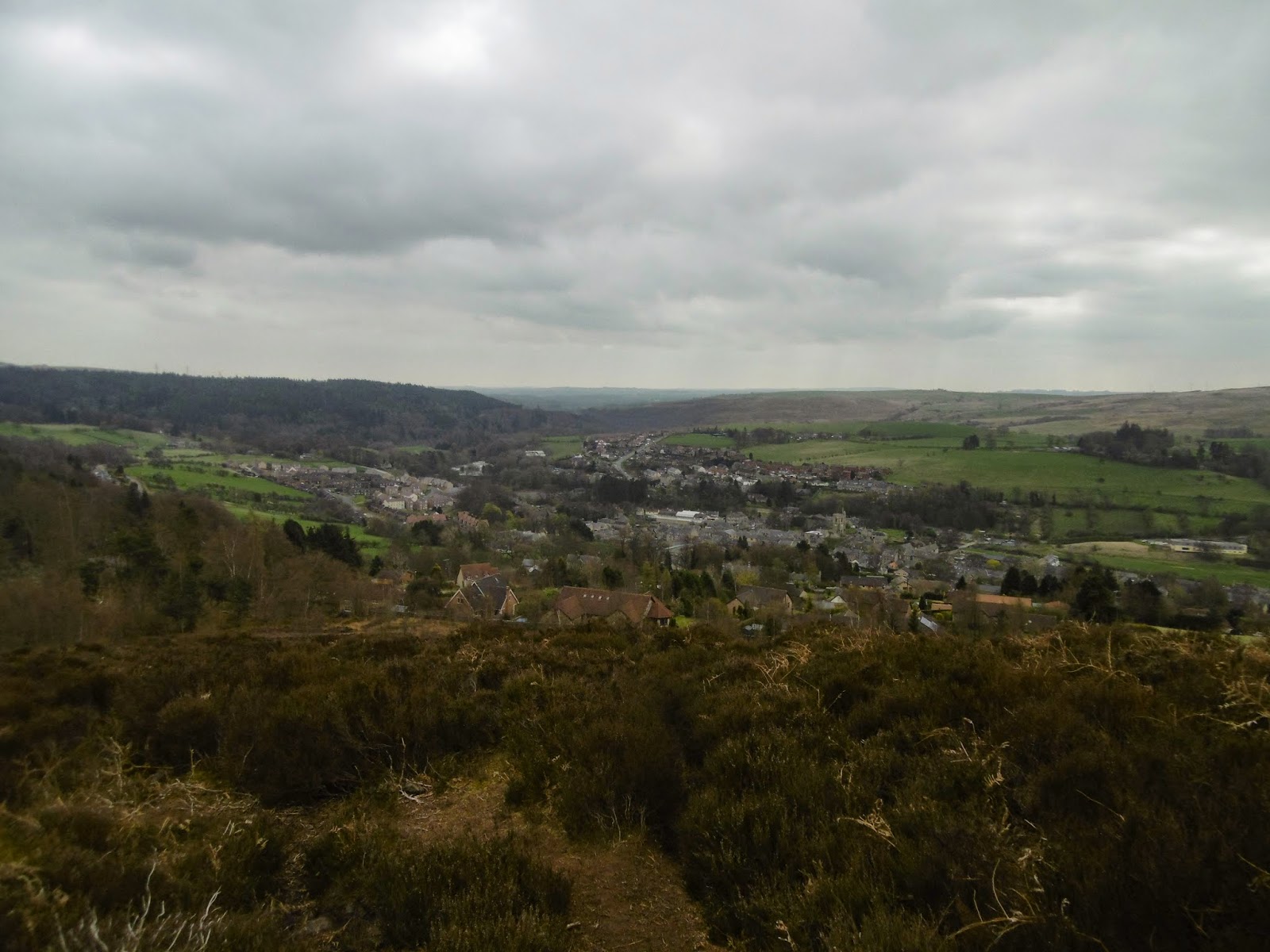 Our lunch break was spent luxuriating in the warm sunshine, idyllic conditions. We had to press on though, there was a hill to climb. Following a trail blazed through the heather by a heavy duty mower, we descended to Crocky's Heugh, joining a well surfaced byway. A short distance further and we where once more ascending a fairly steep hillside. It was warm work, gradually though height was gained. The rock in this area is sandstone and very porous, hence the ground was extremely dry. Passing by the first two cairns we arrived at the third, marking the top of Cartington hill. 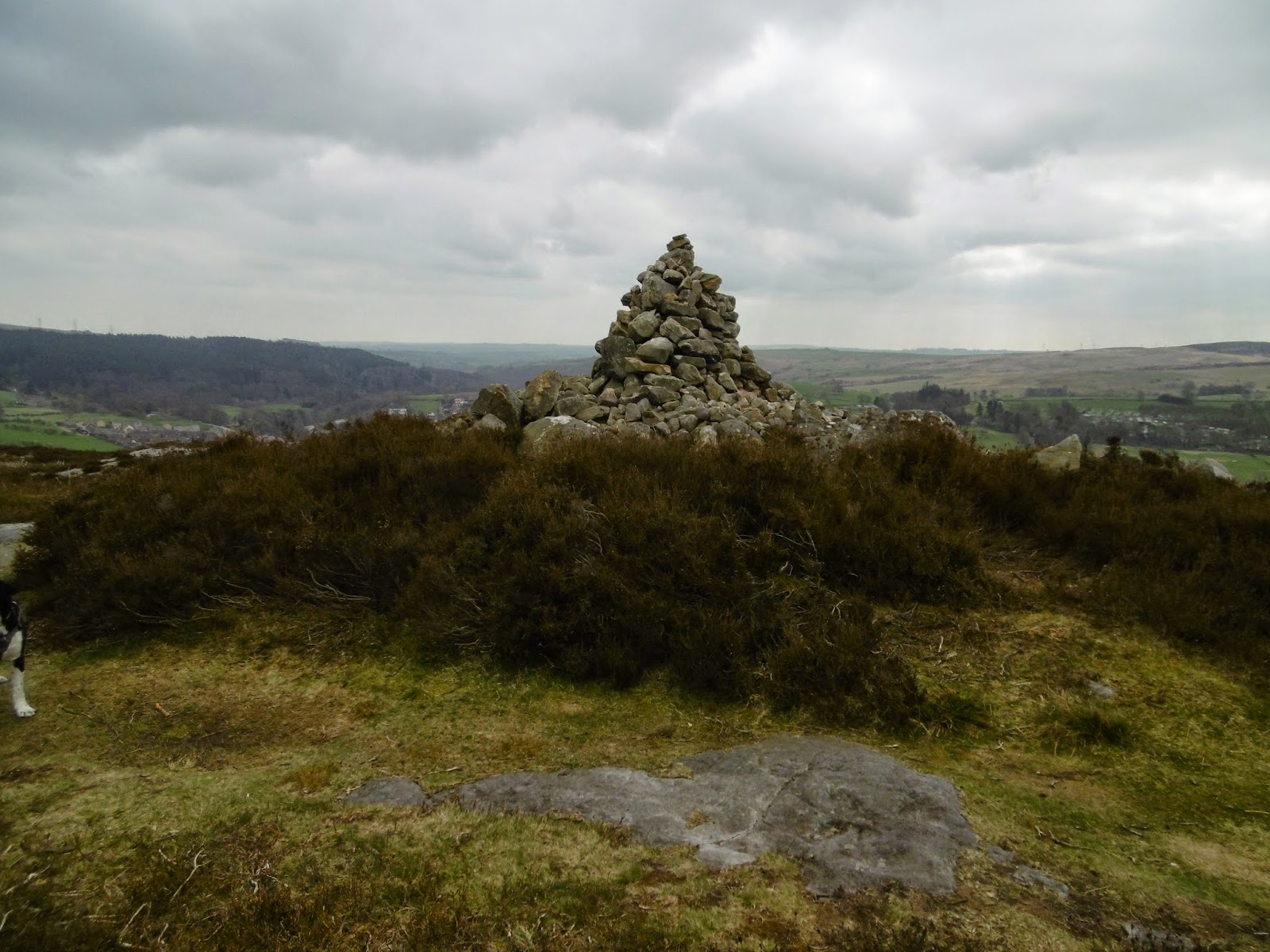 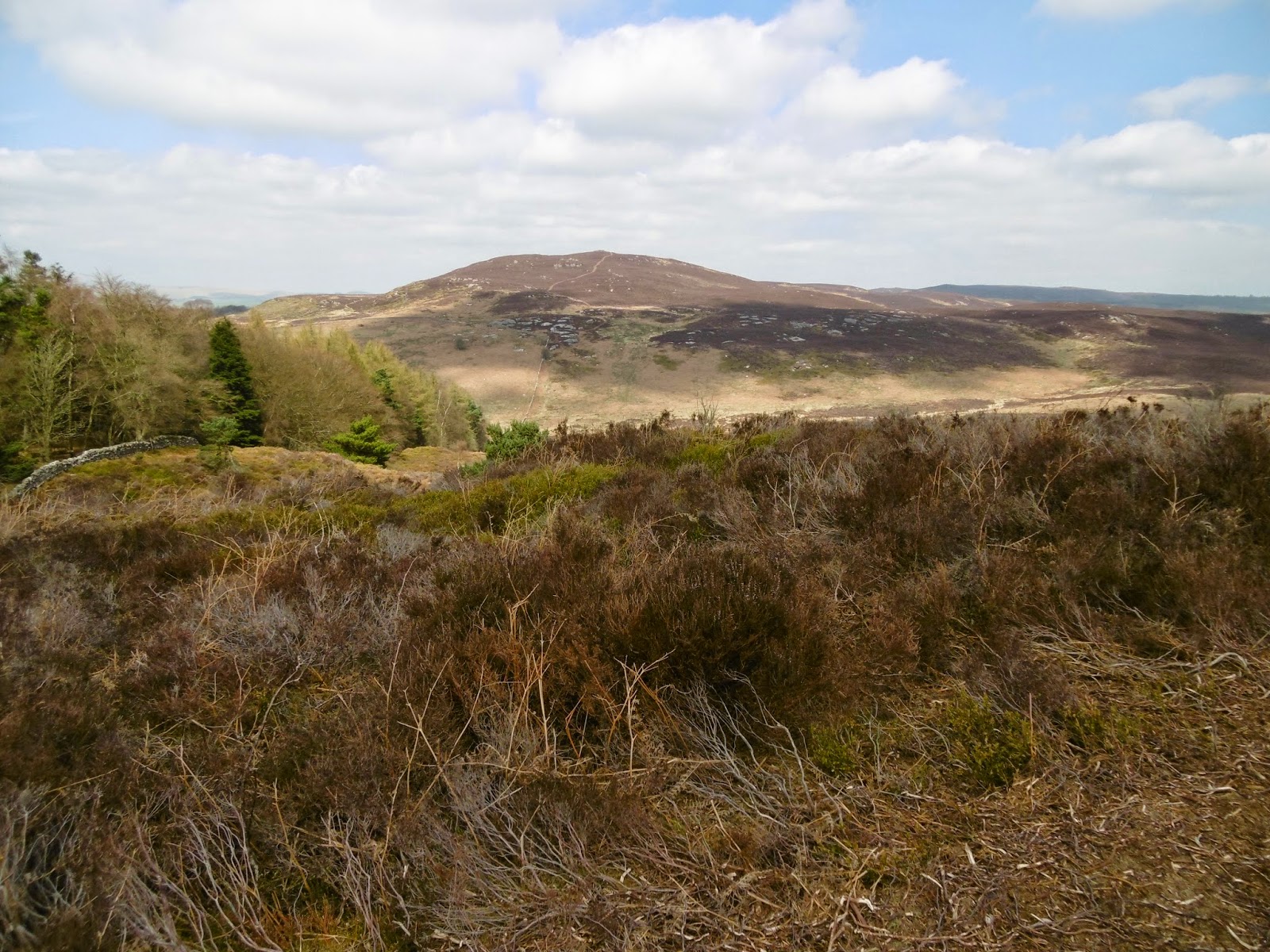 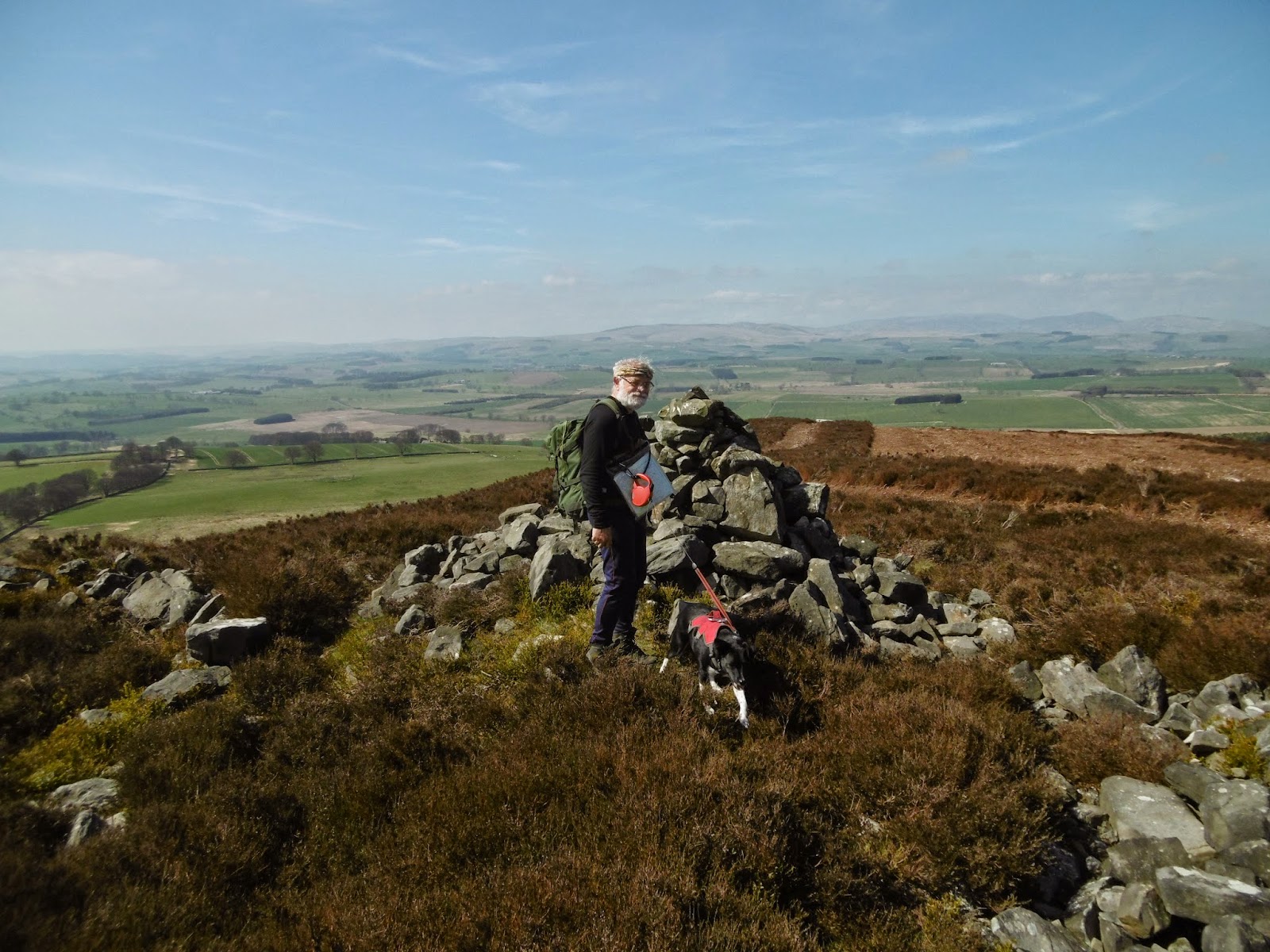 There was little option then but to backtrack, stopping for a short break by one of the previously passed cairns. Days like this are to be savoured, rushing would be a heinous travesty. Lucky certainly relished the sunshine, taking the opportunity for  a quick snooze when stopped for a break.
Coming down by Primrose cottage, we had one of those serendipity moments. The path we wanted which led to Debden lake, was marked as private. Rather than trespass we headed out to the road. Opposite was a road that led in to Cragside. Once the home of the arms manufacturer, industrialist and entrepreneur, lord Armstrong. Now it is owned and managed by the National Trust. A quick peruse of the map and it looked as if we could avoid some tedious road walking by making use of the tracks and paths that led through the extensive grounds. 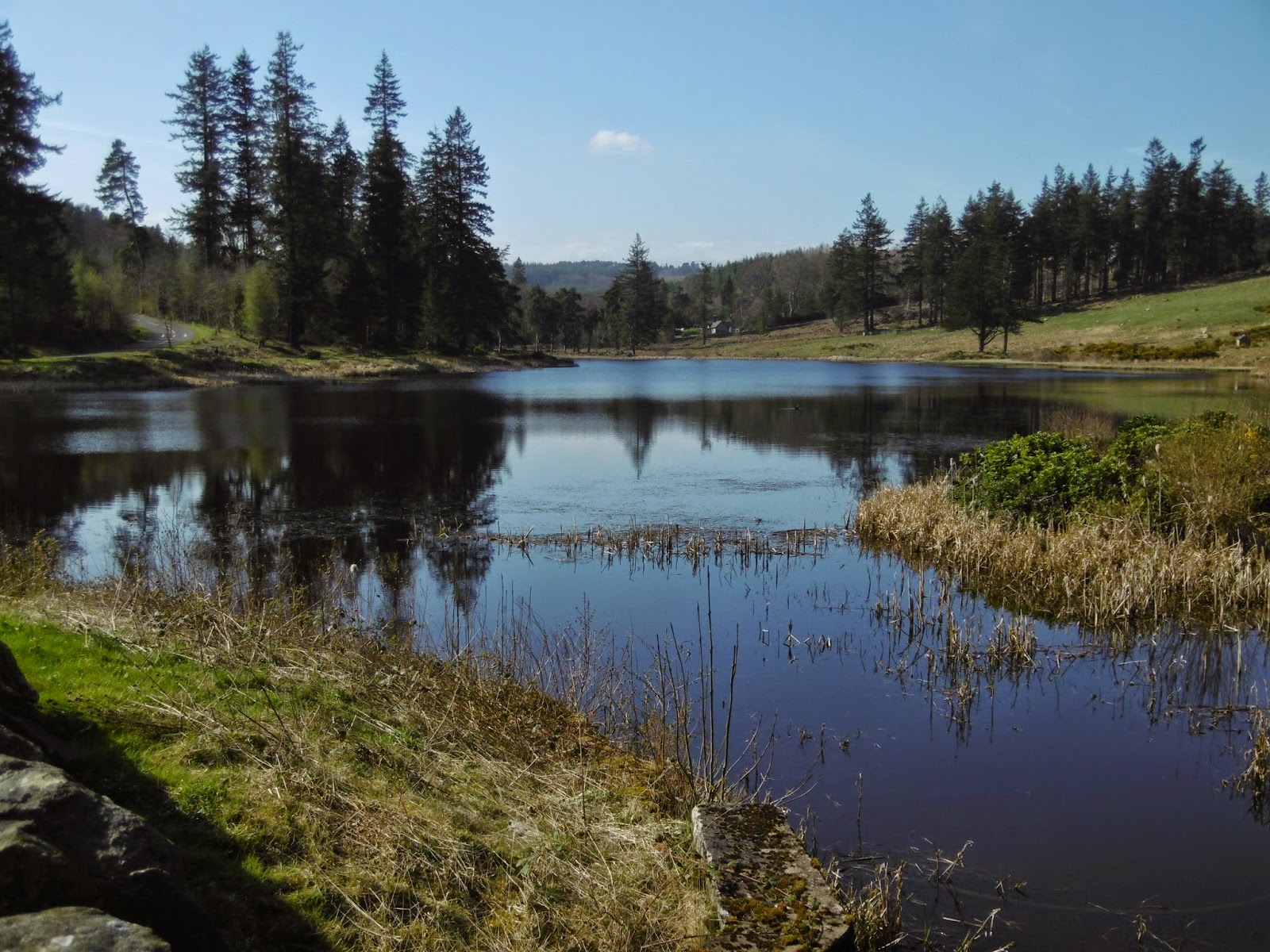 No one challenged us as we ambled through. It was delightful walking although Lucky was not keen on the high metal bridge that spanned the river far below. 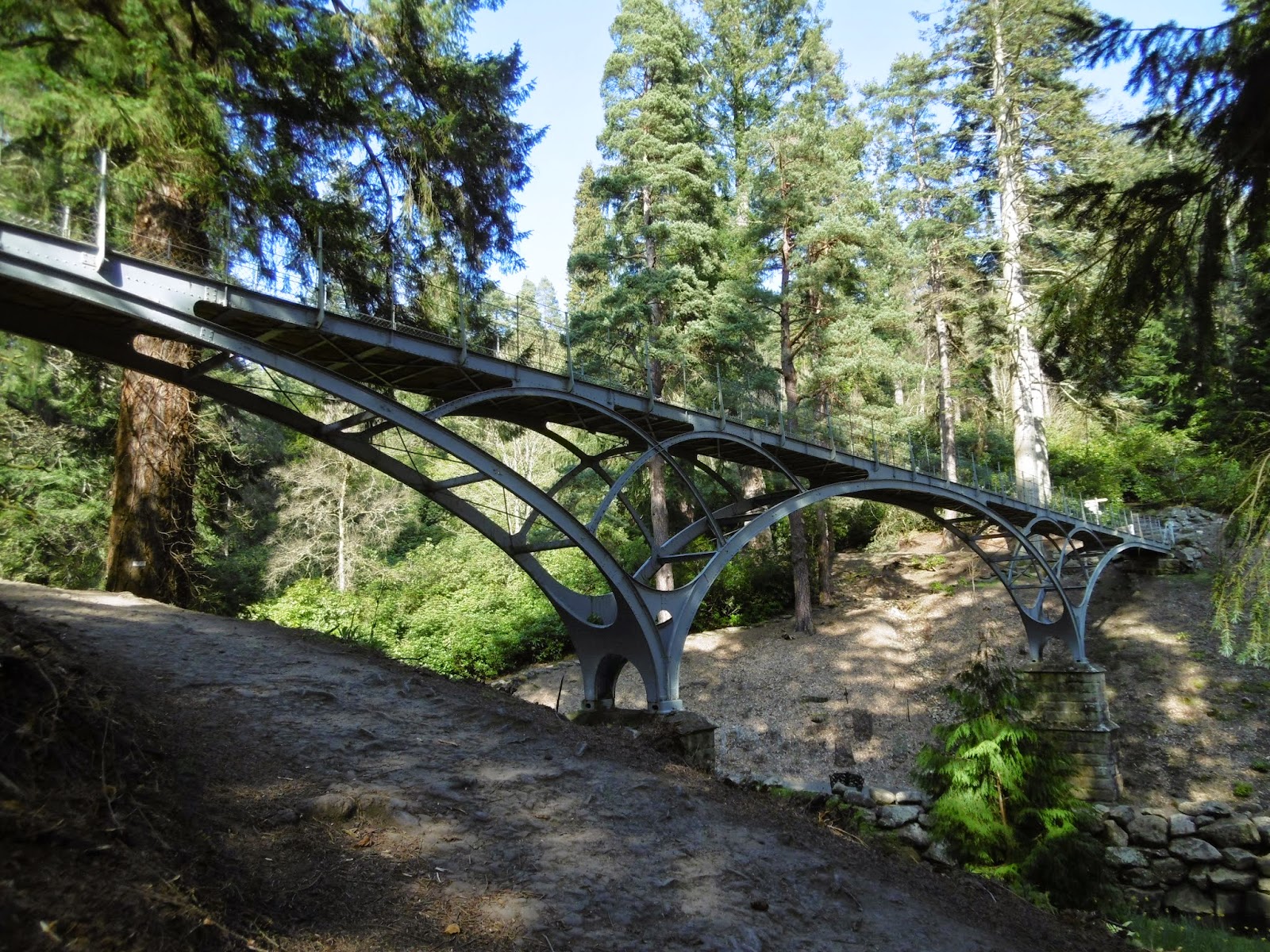 Our way took us through a stand of humungously large pine trees, awesome. 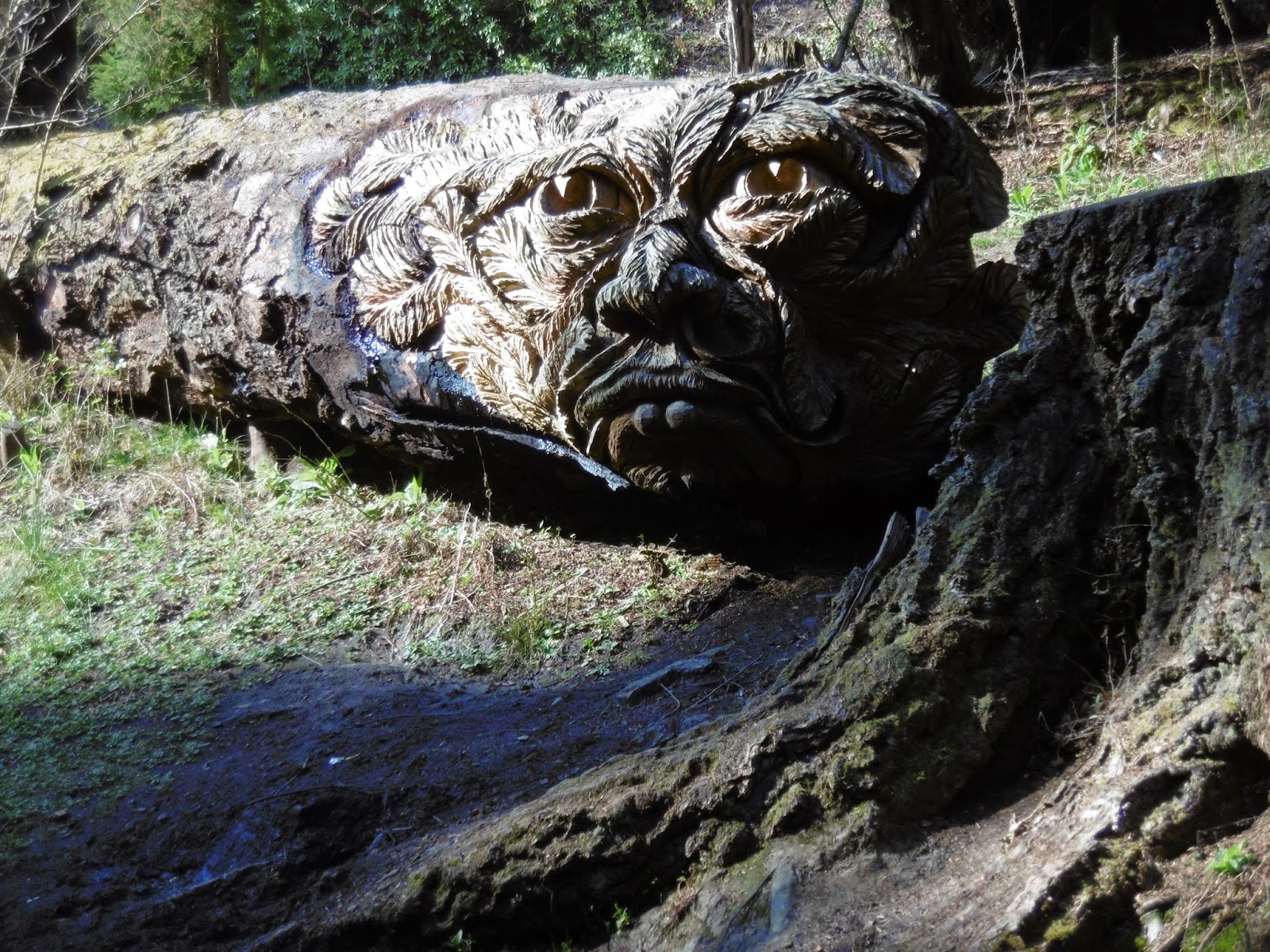 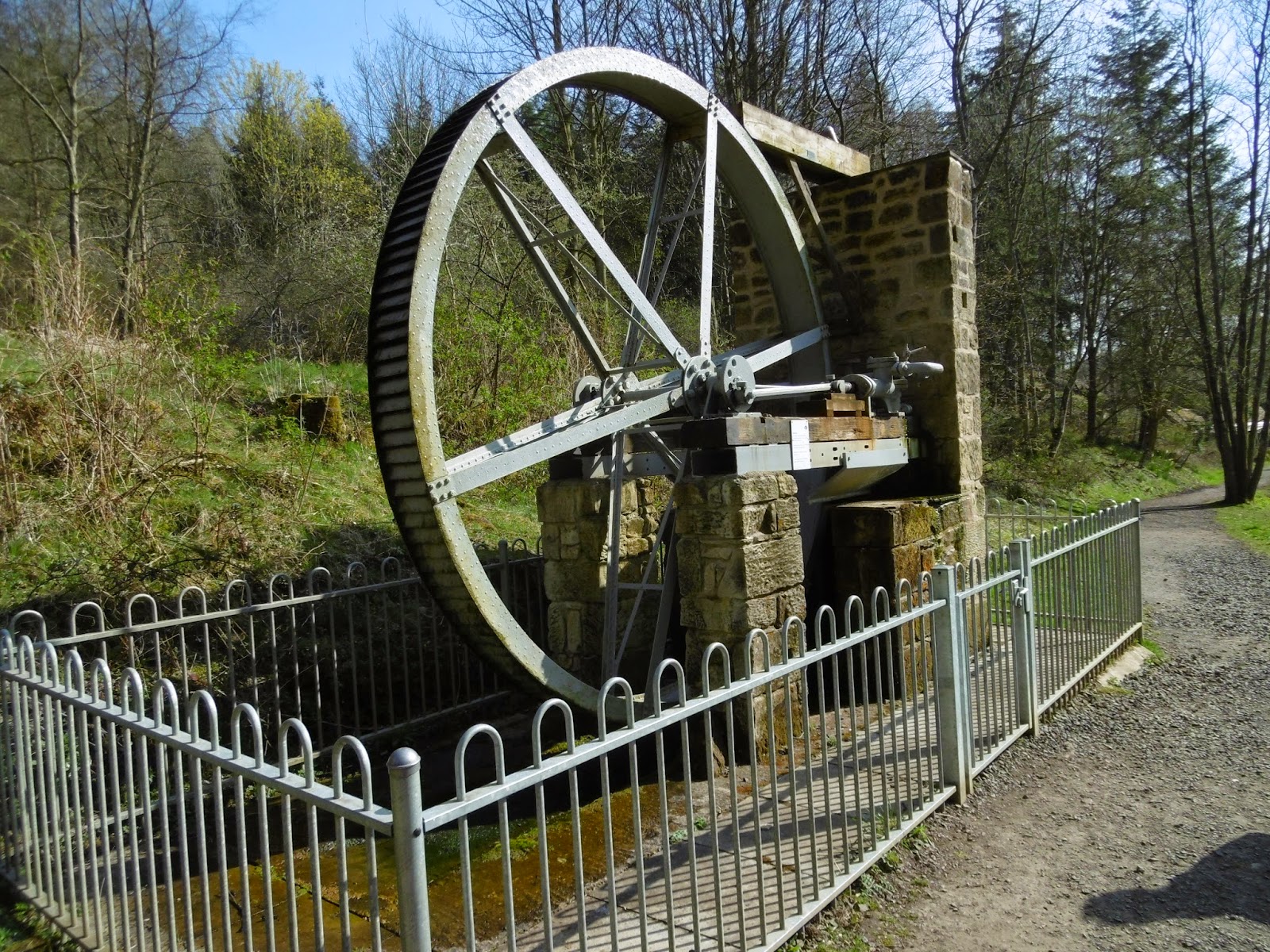 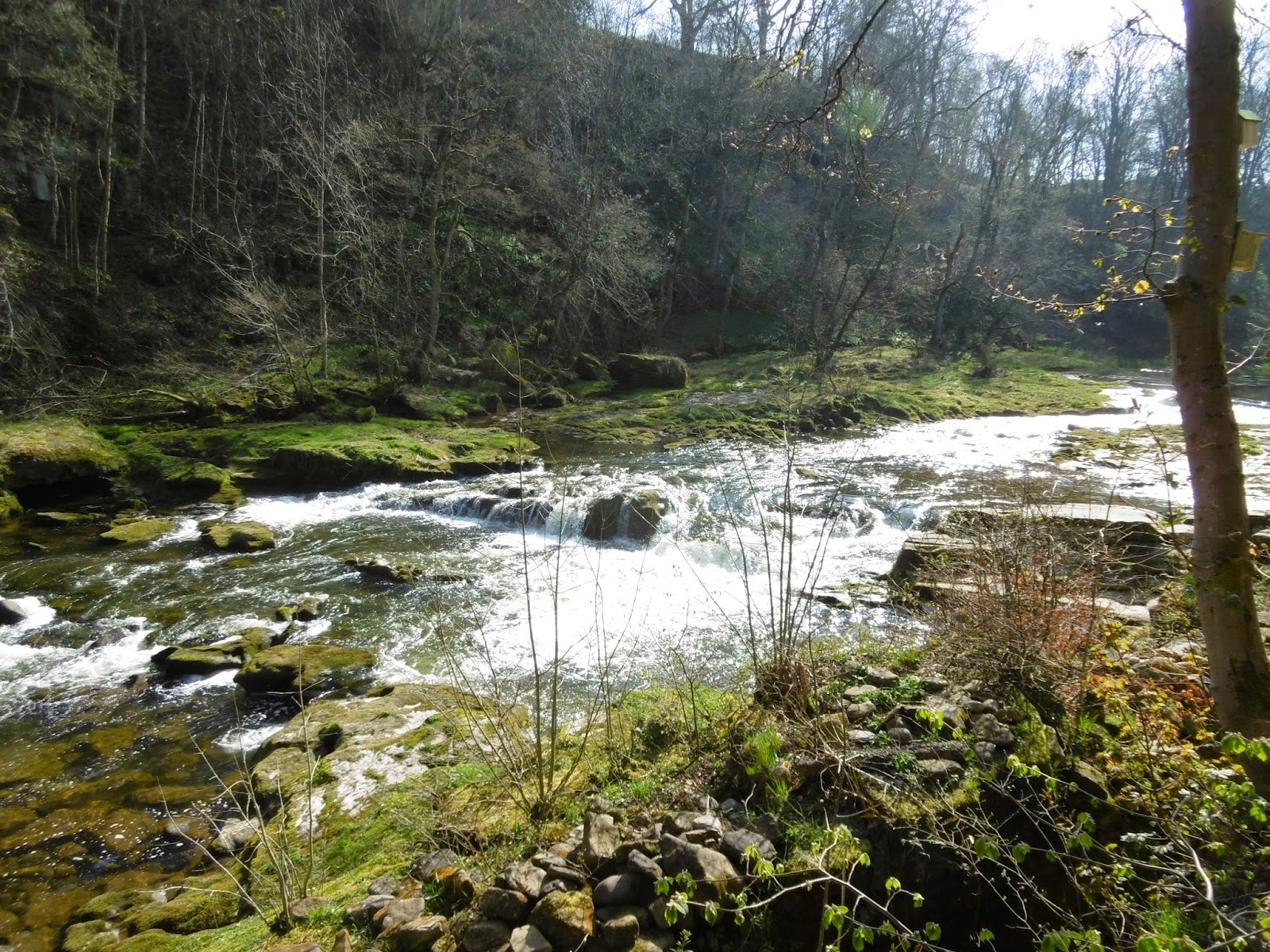 A splendid day, this was a new area for both of us and it turned out to be a little gem of a walk. As yet I am uncertain of mileage. My map measuring thingy is currently awol. However, I am sure Mike will put the mileage up on his blog and I will update later.

A cracking day in the Cheviot hills. Mike (northernpies.blogspot.co.uk) Had proposed the walk. There was a wee top he was interested in. Thus it was that we where winging north on the A697. Turning off on to the narrow and twisting Ingram road which heads up the Breamish valley. The warm, sunny weather had brought out car loads of folk. The numerous picnic spots where bustling with people.
With the car parked at the last picnic spot in the valley, we where soon heading up the hill to take the bridleway by Greenside Hill. Passing the few outlines of a medieval village, we headed a little further up the hill and found a sunny spot out of the chilly breeze for lunch. What a pleasure to sit and bask in warm sunshine. 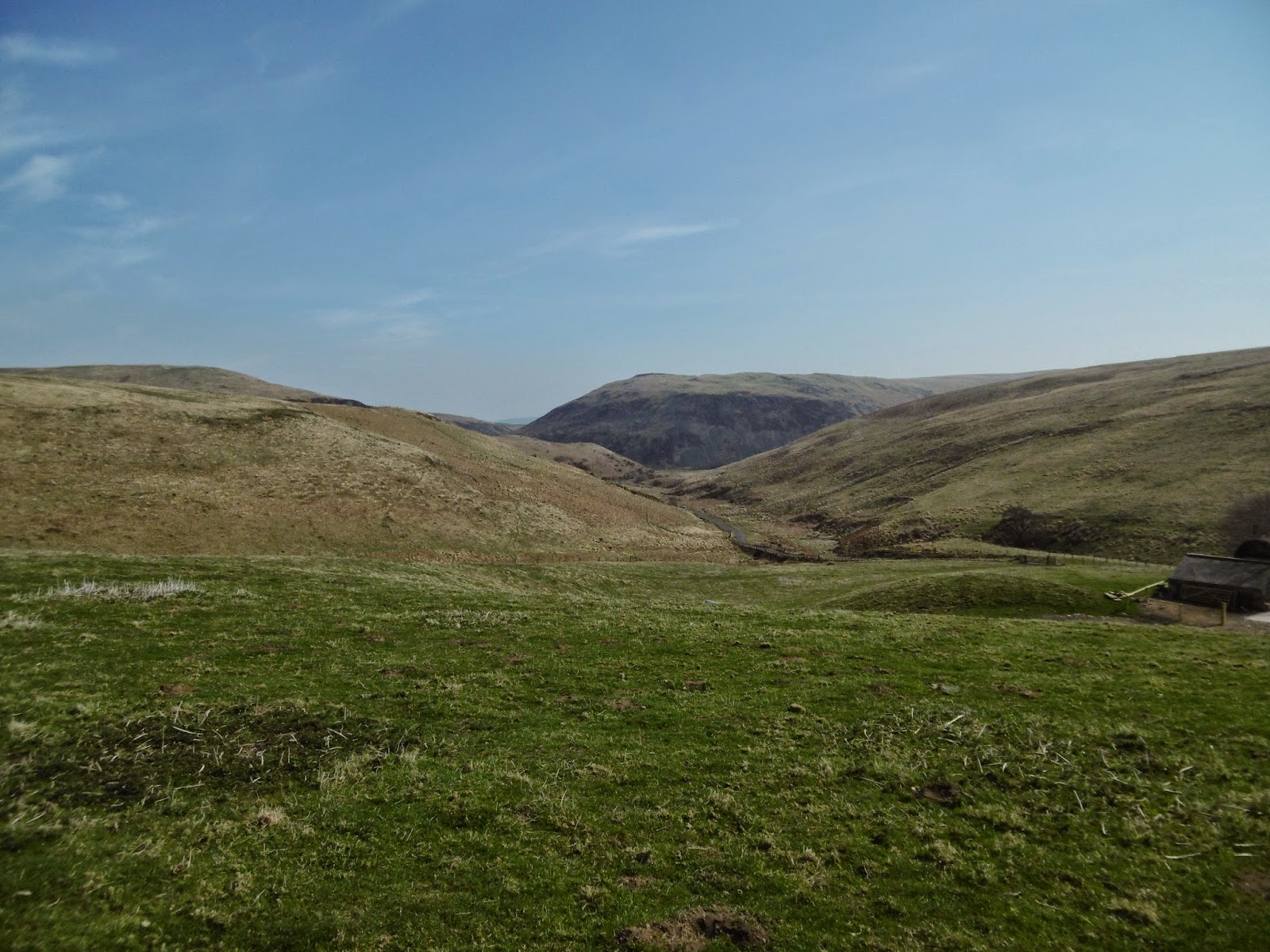 Our way led on upwards, past Cunyan Crags and up to Dunmoor Hill. A gentle descent and then a long pull upwards toward Hedgehope Hill. My legs where feeling the strain and I stopped just short of the top, allowing Mike and Lucky to continue upward. 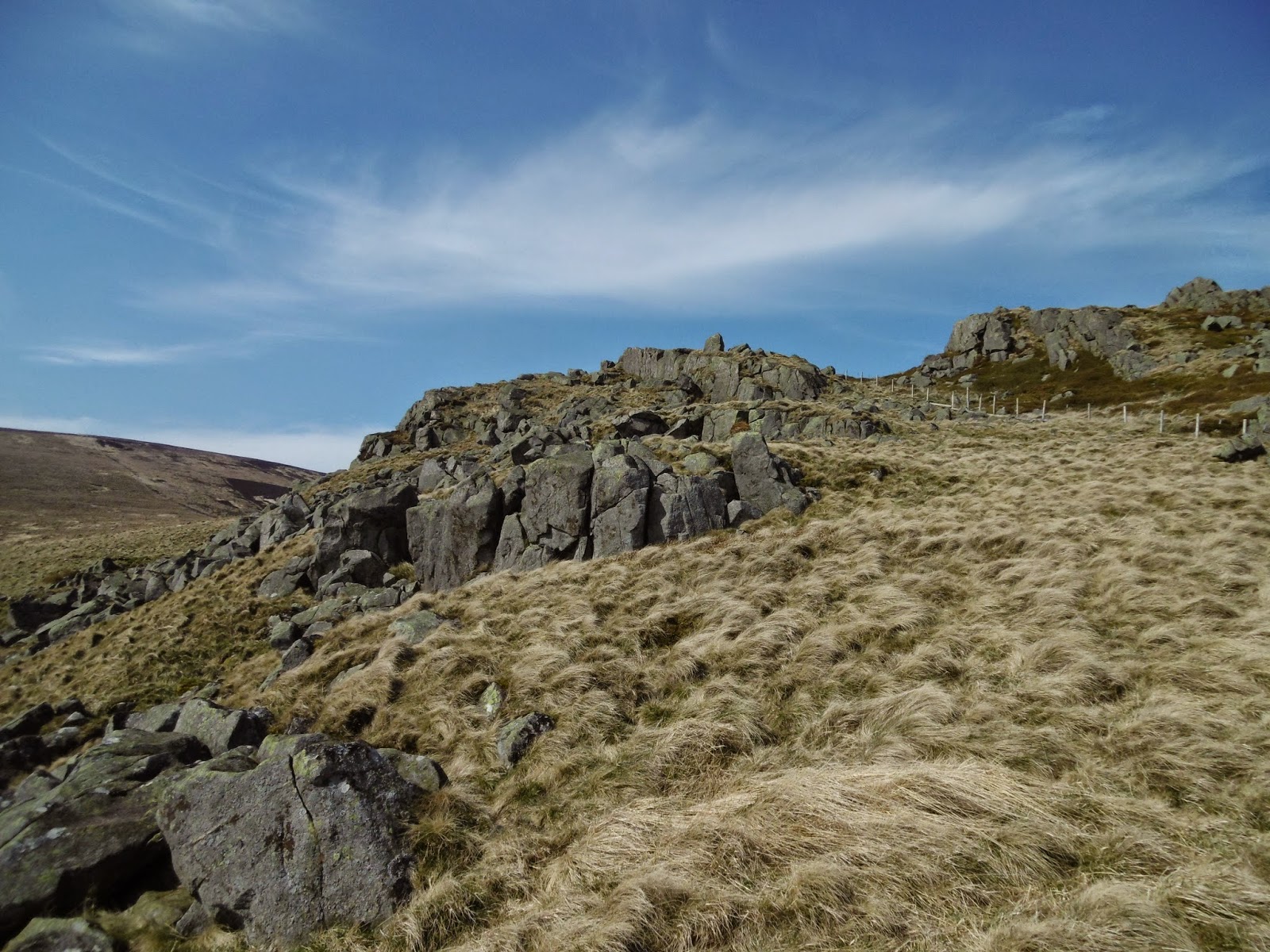 Mike and Lucky soon rejoined me and we continued on towards Mike's intended goal for the day. High Cantle is an interesting and rather prominent geological feature. A rocky outcrop protruding out of the surrounding moorland. We took in both tops to ensure we had bagged the highest of the two. It was then a long descent down to the track that runs through the Breamish valley. We had spotted several small lizard type creatures, (newts?) Also I spotted a large adder making for cover. Fortunately Lucky had not seen it.
Smoke drifted down the valley from where keepers where burning the moorland. This was grouse country and the burning was to stimulate fresh growth of the heather. 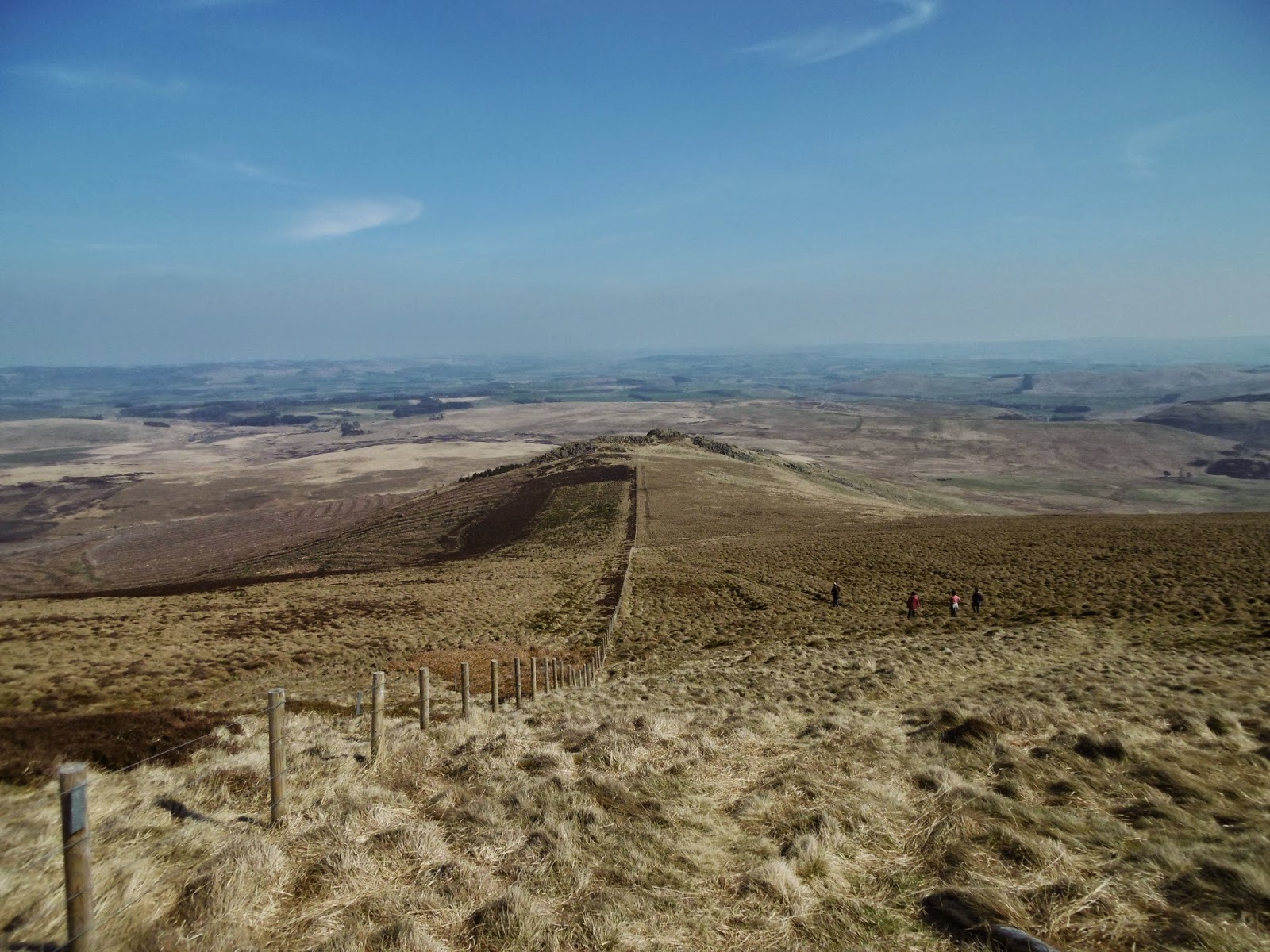 . From Linhope it was back on to tarmac and the walk back to the car. 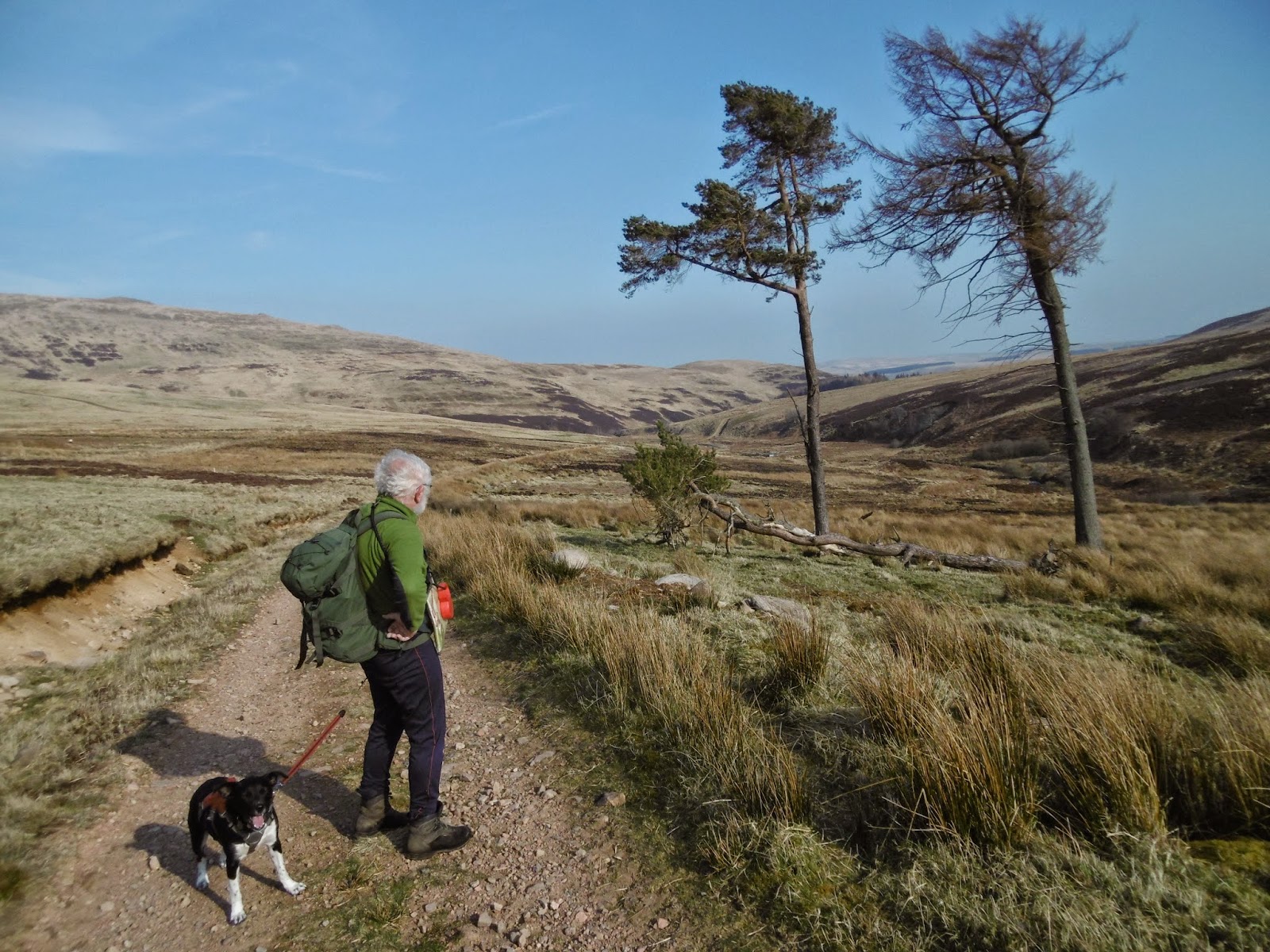 A very pleasant and enjoyable day's walking. Mike has given the mileage as at seventeen kilometres, roughly ten miles.
Posted by Dawn at Friday, April 10, 2015 8 comments: Links to this post