After the usual rounds of e mail messages between Mike, John Jocys (JJ) and myself, a date, time and a rough plan were drawn up. Thus it was that we met up in the pub at Bamford on the Monday afternoon. A quick drink and, shouldering our packs, we headed steeply uphill out of the village. Wire barriers and notices stating that the road (Rough track?) ahead was closed due to exposed cables. Undaunted we skirted around the barrier and pressed on upwards. Much of the road was badly eroded and in places slippery but we saw no cables. What at first appeared as a wall in front of us, was in fact the road. It was that steep! In the last light of the day, after passing through a car park with 'no camping' signs and various other notifications, we finally found a place to camp on the edge of a wood. A rather unsalubrious spot  but needs must. As darkness descended so did the murk and wetness. 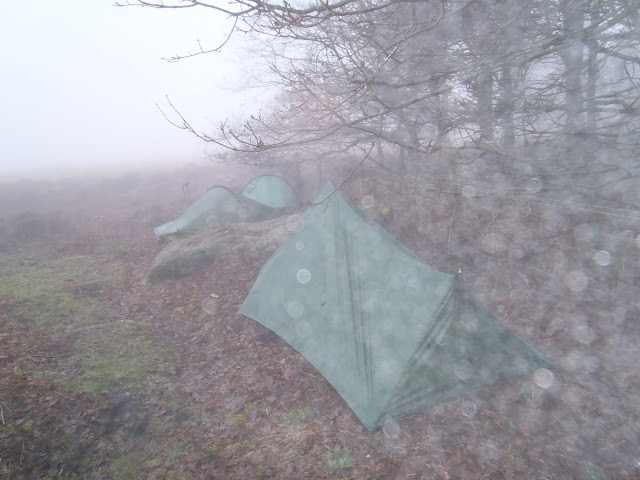 A dreich morning, Peak District.
Tuesday morning was one of greyness, dank and dripping wet. We were in no hurry to set off. Eventually though we packed up and headed on toward Stanage Edge. We were in a monochrome world. The ghostly figures of sheep appearing and disappearing in the thick cloud. Strange rock formations, phantom sculptures adrift in spectral light and drifting waves of murk. 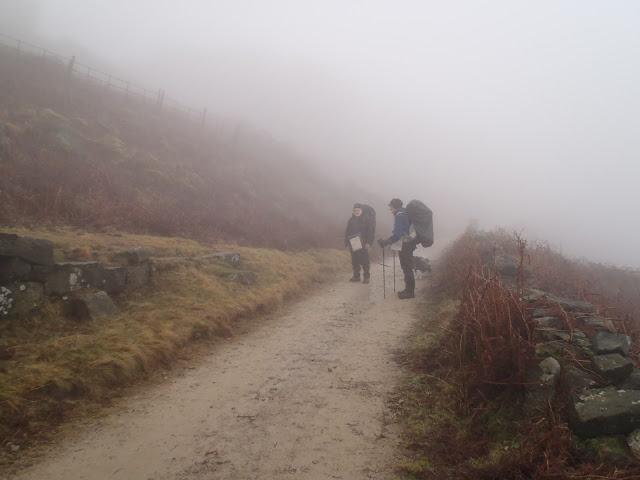 Figures in the gloom.
Something else that was very apparent was the incredible wetness underfoot. Mind, it was not that bad weather wise. There was no wind and it was incredibly mild. 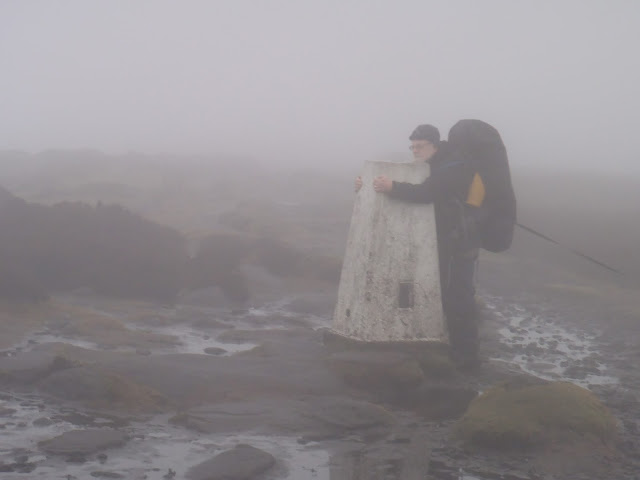 High Neb trig point.
A descent to a main road. Briefly we were treated to a wee bit of a view. A spot of road walking and a stop for a lunch break and once more we ascended in to the mist. 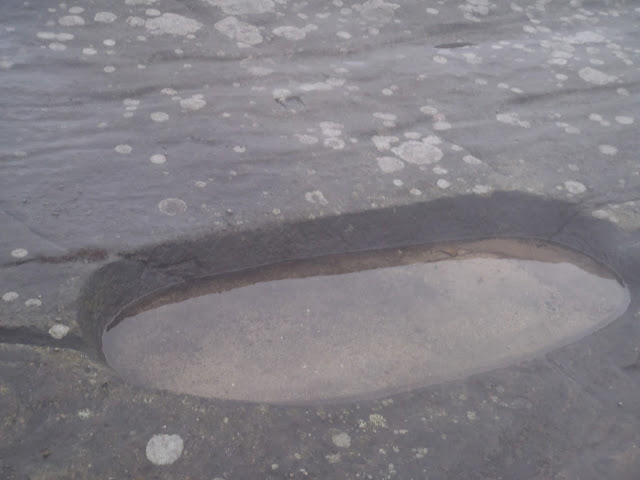 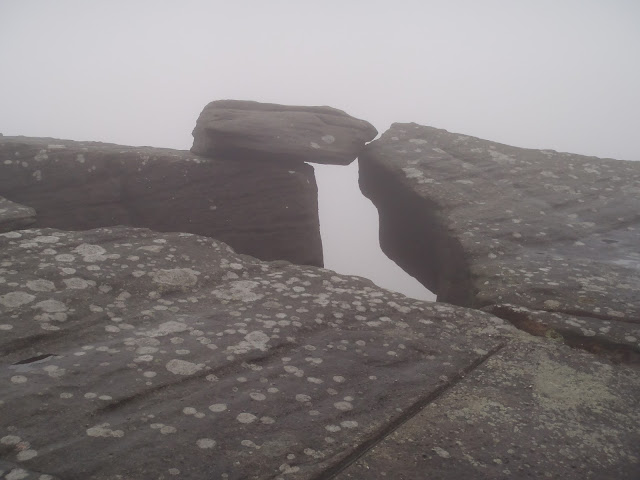 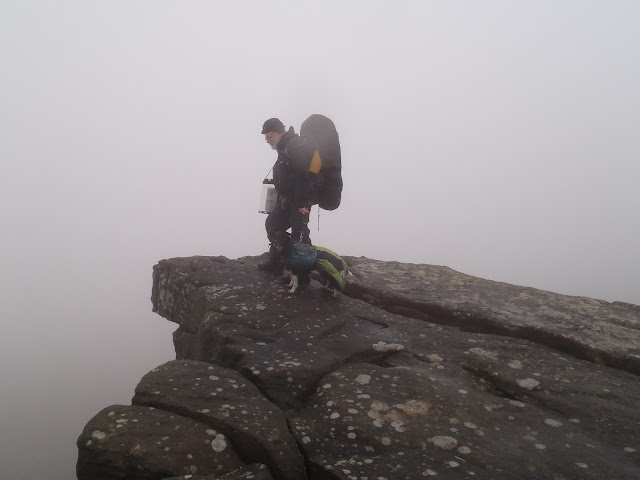 A void lies beneath!
.Passing the grey clad Wheel Stones, we pressed on to Dovestone Tor. According to the map, a small stream was to be found near there. In reality we found a myriad of tiny trickles that would eventually become a stream. We took water from the many pools in the area and set up camp in beds of soft heather, moss and bilberry. The weather turned from damp and mist to dense cloud and extremely wet. To have strayed far from the tent would have been folly. 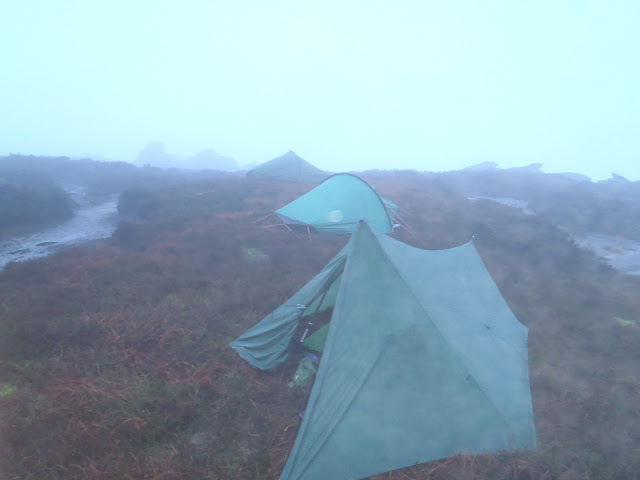 Tents in the mist, Dovestone Tor.
Wednesday morning saw the tents streaming with water. Even in the tents, things felt decidedly damp. However, despite it still being misty, there was a hint of brightness. 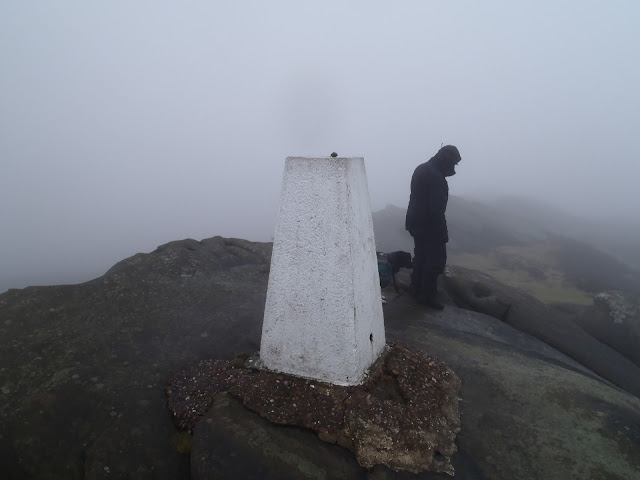 Once packed up we made our way around by Lost Lad. A wee scramble to attain the trig point. No fine views though! 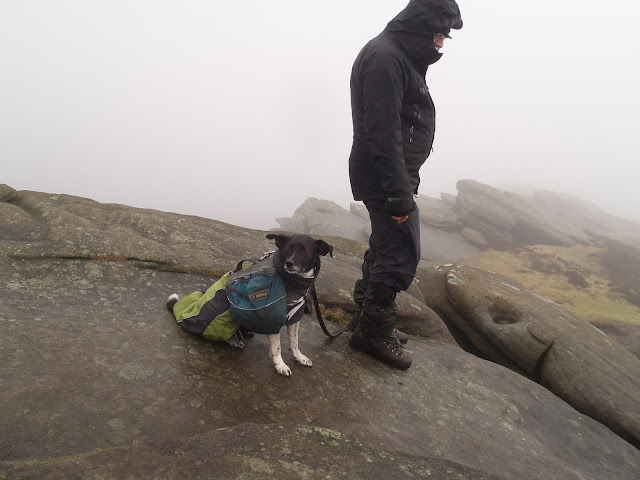 Lucky does not enjoy the wet, but remains steadfast.
Descending down toward Upper Derwent reservoir we finally popped out of the mist to open vistas all around. A stop for lunch by the reservoir and then it was down to Fairholmes and a quick cup of tea at the visitor centre. The place was quite busy, it must be heaving in the summer months! Squadrons of ducks patrolled the area and they looked fat and healthy, obviously well fed by the visitors! 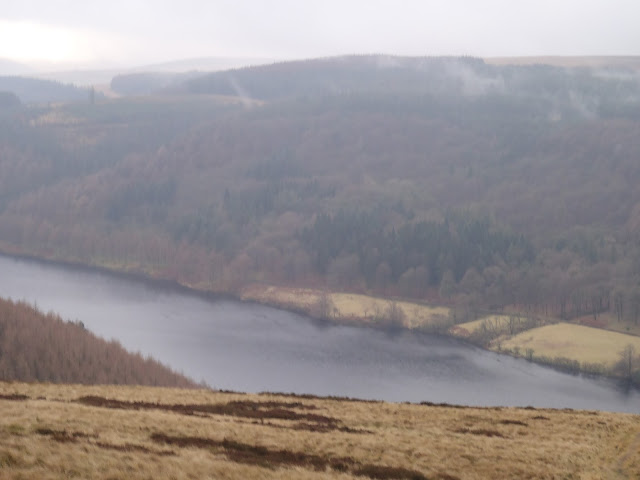 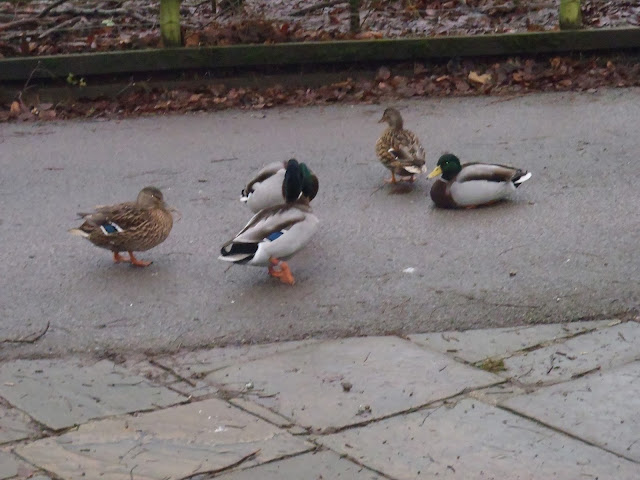 Well fed ducks.
From the valley a steep path led us up through Hagg Side woods to the ridge above. A steep descent down to Hagg Farm, across the road and then another steep ascent. By the time we made the top I was fast falling in to 'knackered old lady mode'.A quick cast about and we camped close to Hope Cross. 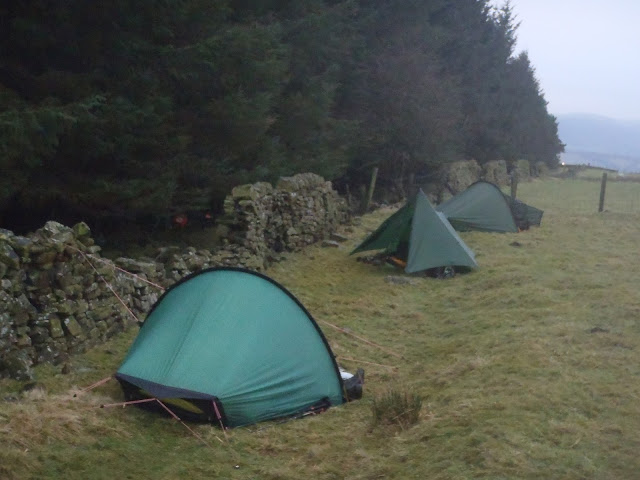 Camp near Hope Cross.
Thursday turned out to be a pleasant day. There had been some mist and mizzle during the night and tents were packed away wet. A steady walk took us over to Winhill Pike. Unfortunately Mike was suffering from back pain. A couple of pain killers from John seemed to ease things a bit. 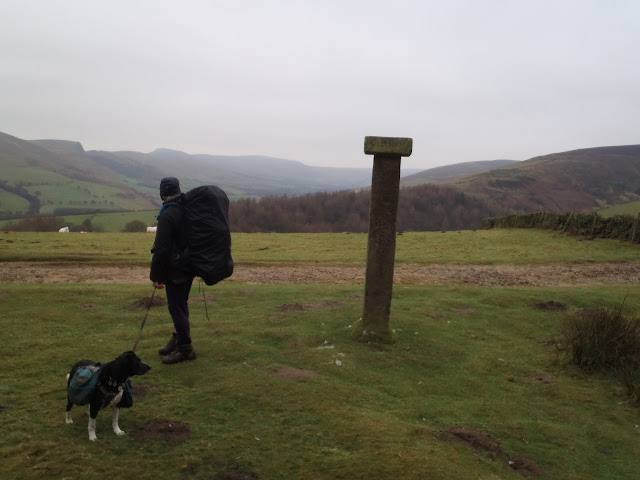 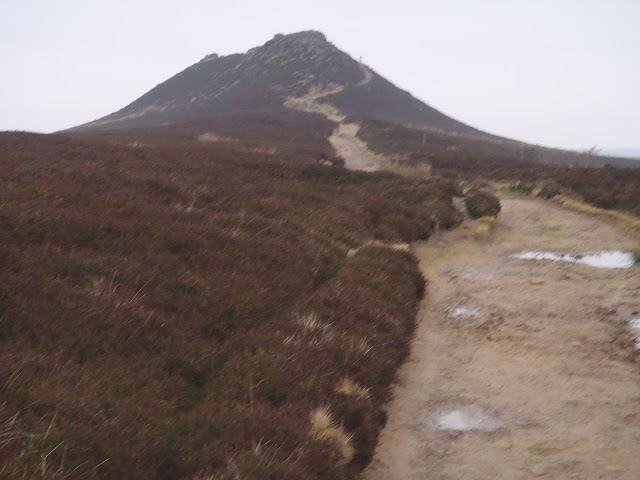 Winhill Pike.
The path leading us back to Bamford was grim. Dense, cloying mud with underlying clay made for hazardous, slippery conditions. 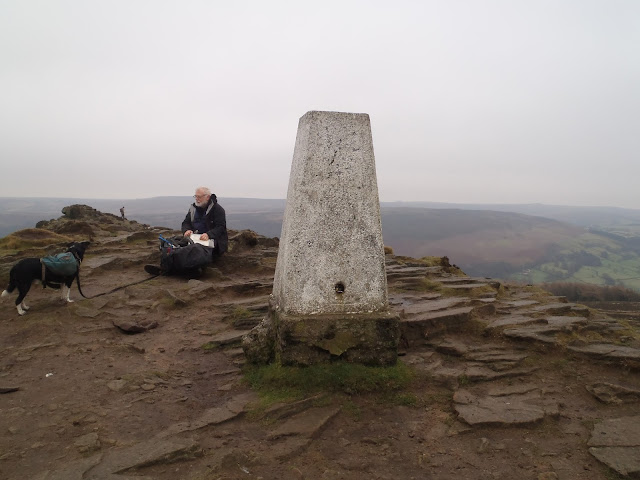 Trig point, Winhill Pike.
We arrived back in Bamford in time for a spot of lunch in the pub before John had to dash off to catch his train back to Manchester. Mike and I had a bit more time to spare.
An enjoyable trip in good company, despite inclement weather conditions. We will have to plan a return visit sometime. 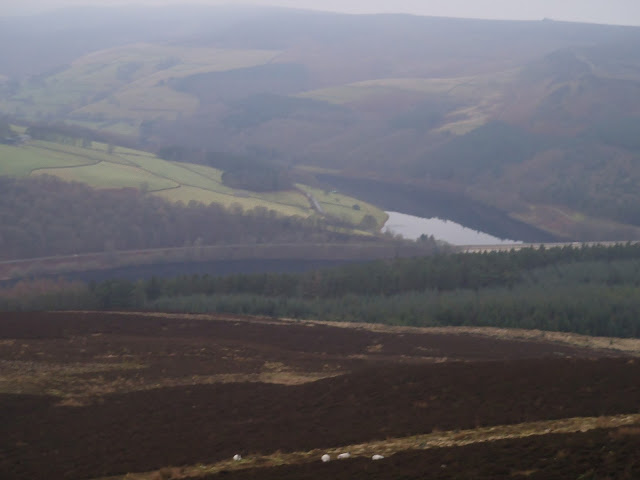 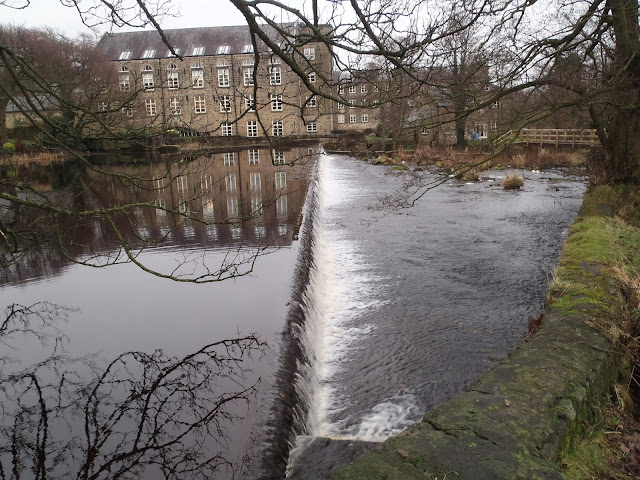 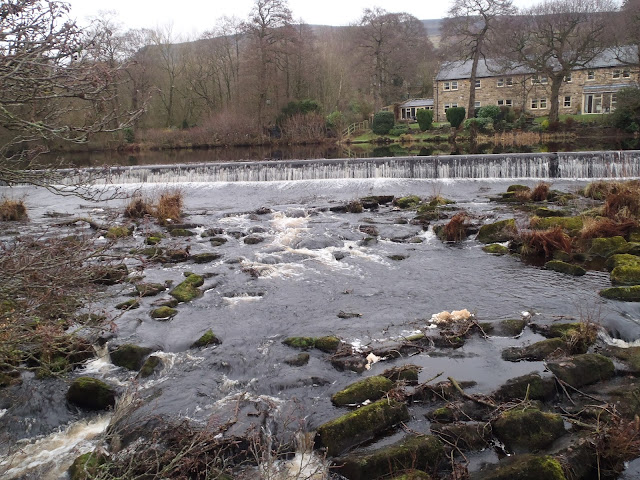 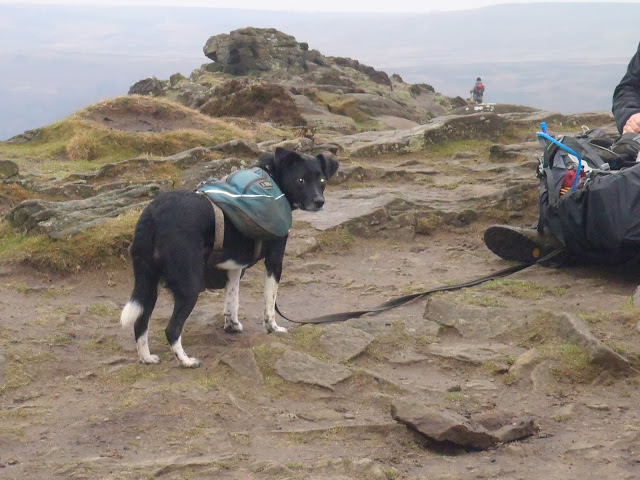 Backpacking Lucky the dog.
Posted by Dawn at Saturday, January 21, 2017 8 comments: Links to this post