My tiny balcony, yes, Iam on the 6th floor but it still floods. 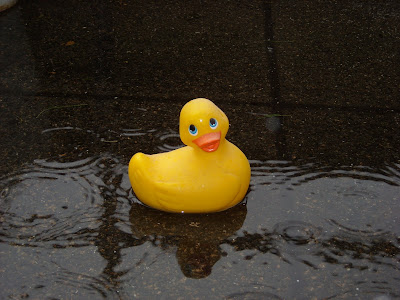 Spoons, the one on the left has yet to be oiled, usually with olive oil. Left hand one cherry, the other two olive. 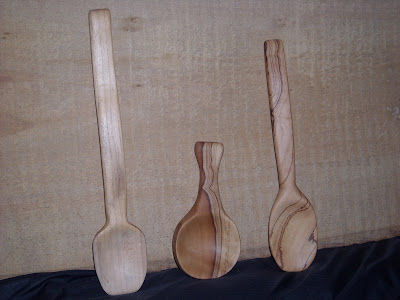 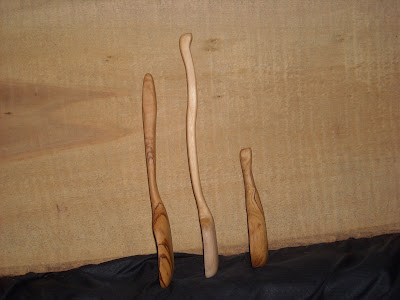 It has been over a week now since surgery. only a fairly minor op but it took a while to settle down. Knowing I was going to be stuck in the flat for a week or two,I went on the net to search for some cheap wood suitable for spoon carving. Found a couple of nice bits going cheap; however, the sizes where in metric which I did not really take in. Poor postie, he was a bit out of breath when he called with the package. It was little wonder really, the wood was a tad bigger than I realised; a piece of rough cut lime board, some three foot long and over a foot wide, plus an inch and a half thick; the other bit was smaller, a piece of cherry. Working in my tiny flat presents a few difficulties, I have no other work space apart from a small balcony, which floods when wet . The first job, after cutting a length of wood to the appropriate size, is roughing it out, hewing it somewhere close to the shape I want. This is done sitting on the floor with the wood on a chopping board and using an axe to shape the wood. To be honest, I am not too happy using an axe for this; it gets kind of close to the fingers at times. What I want is an adze, a short handled small one; so folks here is quick appeal, if anyone knows of a fairly decent adze that needs a new home and is willing to let it go fairly cheap, please contact me, I would really appreciate it. After the rough work comes hours of work with the knives, shaping, cutting, shaving until finally a spoon takes shape. This is carried out either with the rough work clamped to a shelf, for example when I am using a draw knife, or sitting on a chair with wood chipping piling up around my feet. Finally the wood is ready to be oiled, sanded again and oiled once more. All this work is done by hand, I have a variety of knives, again I need a special spoon knife, a left handed one because I work left handed mainly and also because it easier to work with both left handed a right handed knives. An added headache is that I am constantly having to clean the flat; it is just as well I have no carpets. These spoons are quirky, working spoons, nothing fancy.
Posted by Dawn at Wednesday, July 22, 2009 3 comments: Links to this post

Recently I have been watching the hooha over the Ramblers Association and find it in many ways sad but also an indication of the times in which we live. The RA's roots where working class and was considered quite radical for its time. Folks did not have money in the years it was formed; rambling was cheap and there was fairly extensive public transport system, also many people hitched, it was an accepted norm and lifts where often readily available. Remember too, many people still worked five and half day weeks and the annual holidays where the statuary two weeks. Kit was makeshift, there was none of the high tech stuff we have today. A lot was army surplus or old clothing modified for use on the hill; old gabardine macs cut down, suit trousers long past their prime; heavy woolen pullovers, getting wet was the norm, many women still wore skirts, there was no special women's clothing, they had to adapt. Boots where heavy leather and nailed, again, often army surplus because they where reasonably cheap; decent mountain boots where astronomical in price. Tents where canvas and normally leaked, for many, tents where beyond their price range. That is where the close companion to the RA came in, the YHA, basic, simple cheap accommodation. Probably I am showing my age here, however, I can still remember being on the fringes of those times. My first ever boots where a pair of hand me downs and had nails and weighed a ton; when I up graded to vibrams it was something special, my first anorak was a ventile one bought cheap because it was shop soiled; it was murder when it froze, I had an awful job taking it off. The hostels themselves although often basic, sometimes very, where welcomed and well used by the rambling classes. The wardens where often eccentric, a few draconian and one or two mad. Certainly I have encountered a few peculiar ones such as one kilted, heavily bearded guy, complete with dirk and a broadsword that he kept in his office and well remember the Scottish hostels, all self catering, and one provided their own cutlery plate and mug.
In many respects the RA has lost touch with its roots and has become soft and genteel, everything it seems, boils down to being cost effective. Possibly we could argue for a new movement, more radical and out spoken and willing to fight for the rights of outdoor folk. but; cynic that I am, I cannot see it happening. As for me, well, I will wander and ramble as and where my feet may take me, will camp in wild and out of the way spots, leaving no trace of my passing and defy any who may challenge me.
Posted by Dawn at Friday, July 10, 2009 4 comments: Links to this post

Well, the best laid plans etc,as Rabbie Burns would say. Originally I had plans for an extended trip over July; however, after another trip to see the surgeon those have been scrapped. basically I have to go back in to hospital for yet another fairly minor op next Monday. However, I have been warned that for three or four weeks afterwards things can get rather unpleasant. So thus, July is a no go month for getting away. Hopefully I may get a few days in August, it will be a case of wait and see. Provisionally I did consider a trip this week but with the weather non too good I decided against it.
Posted by Dawn at Monday, July 06, 2009 7 comments: Links to this post