Things recently have been a tad busy for me. However, I had train tickets booked and it seemed foolish to waste the opportunity for a few days away.
Thus it was, after a crack of dawn start, that I arrived in Patterdale by early afternoon on the Monday, (16th February)
A few essential bits and a spot of lunch picked up in the village shop and I was ready for a week of backpacking. My plan, as such was loosely based on the Coast to Coast route. There was no intention though to stick to the actual route. It was the bare bones of an idea  to pick my own route across country.  Amazingingly the weather started out dry if somewhat chilly.  The path up to  Boredale Hause could be seen snaking somewhat steeply up and across the hillside. A wee bit daunting and required a slow plod with a few pauses to admire the views? A drizzly shower or two drifted across, hardly enough for waterproofs, enough to make things damp 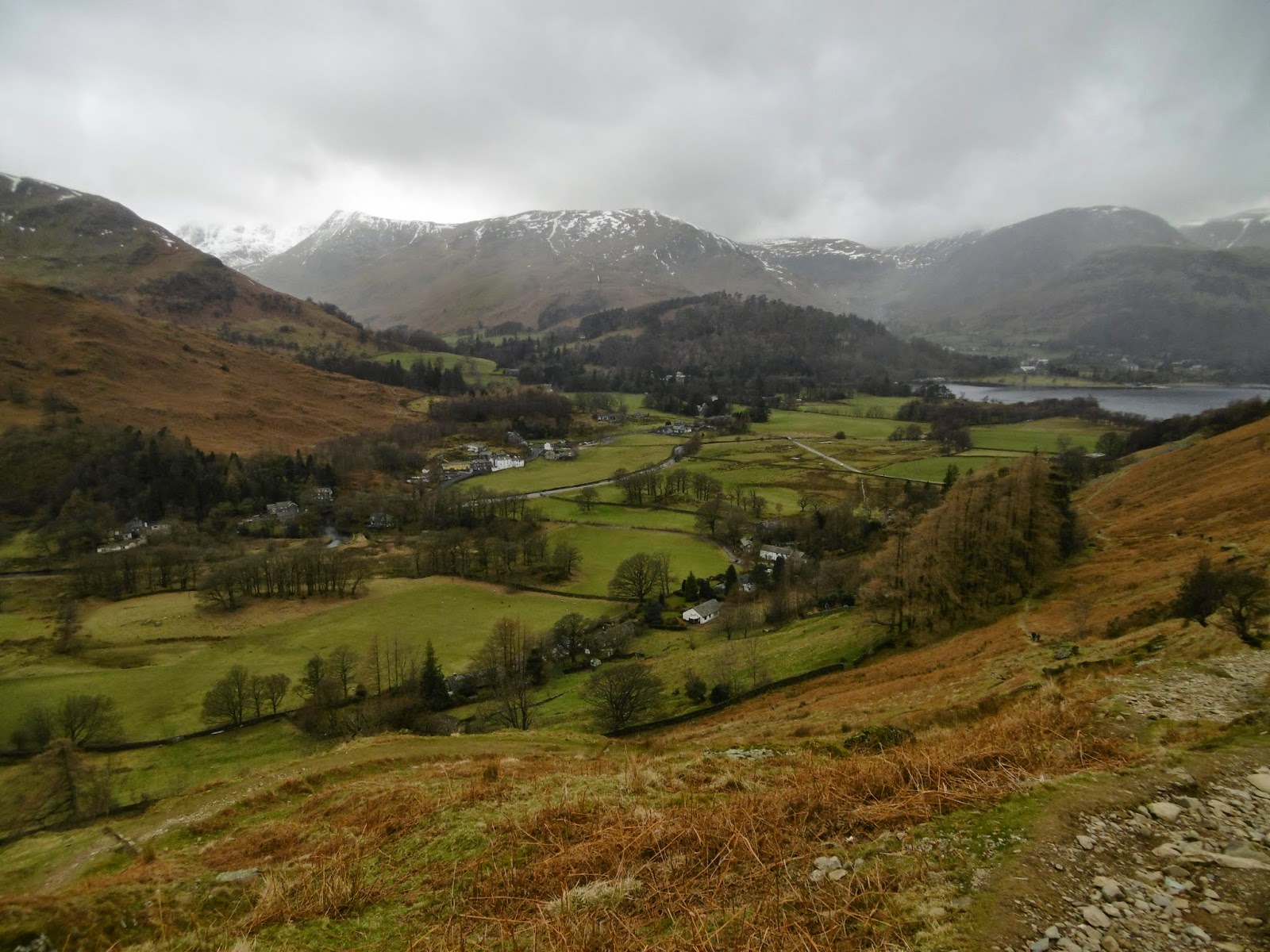 The afternoon was spent wandering around by Stony Rigg, over toward Heck Beck Head, Angletarn Pike and then down to Angle Tarn. A few snow flurries passed through as I headed down to the tarn. Finding somewhere to camp was difficult, the ground was saturated. 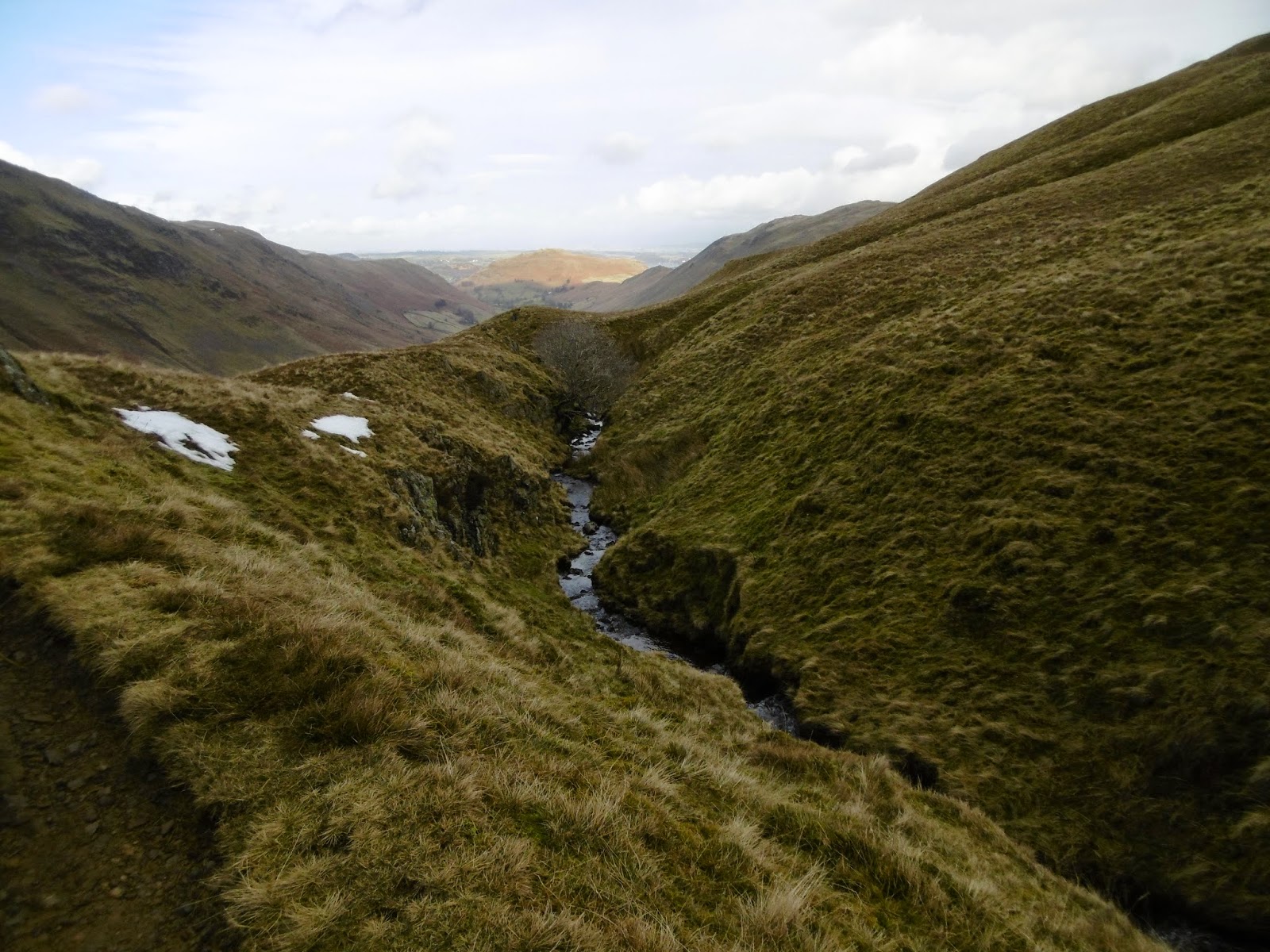 As the evening went on temperatures began to drop sharply. 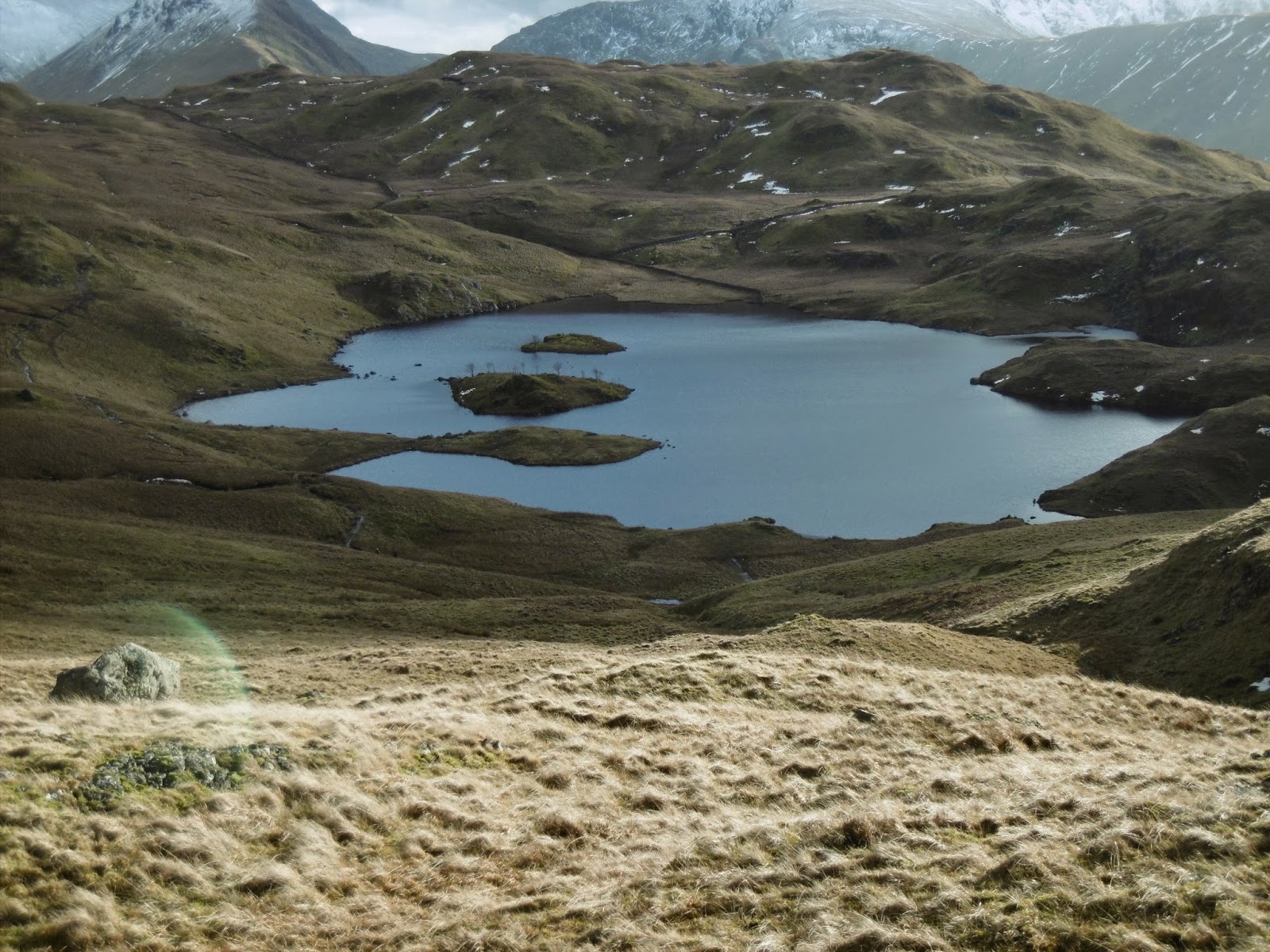 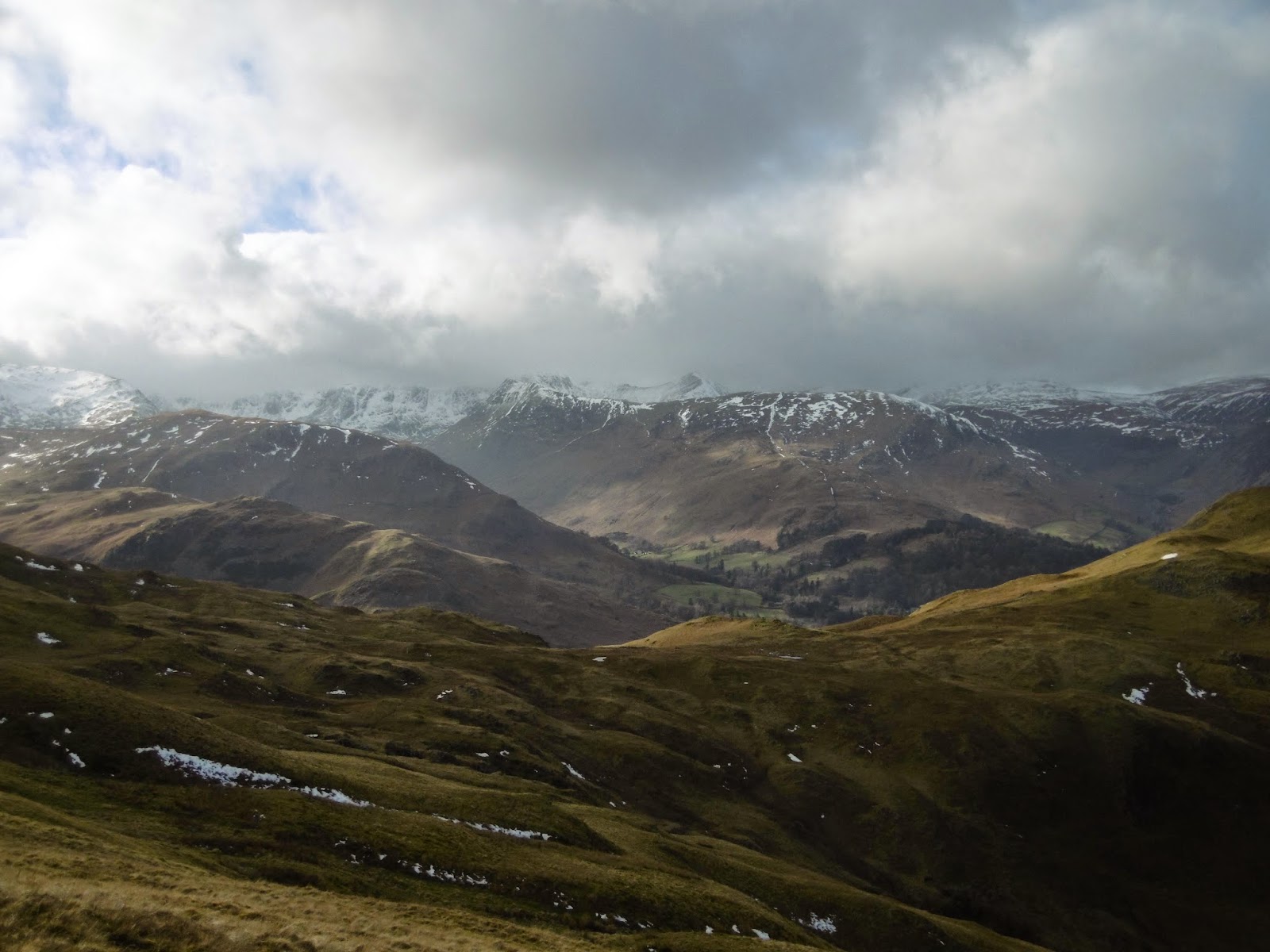 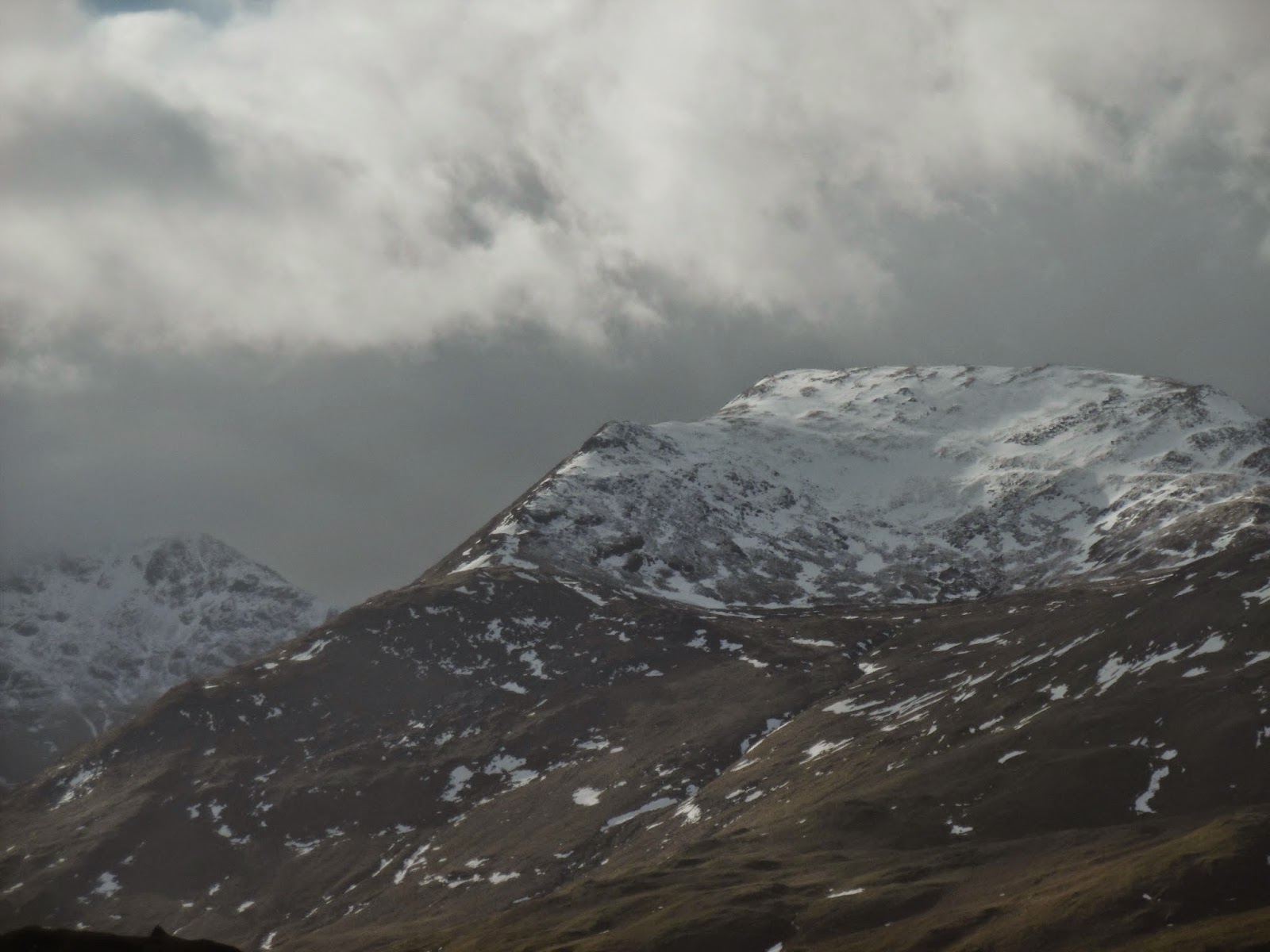 A clear, starry night saw a heavy frost forming. By morning the tent was ice covered and my water bladder was slushy. With a rising wind and dark clouds forming I did not linger too long over breakfast. To my surprise I saw a few deer near the tarn. With the tops  shrouded in gloomy greyness any idea of heading over High Street was binned. Despite a few snow showers and the wind it was actually quite pleasant walking over toward The Knott. Mind, the steep uphill bit had me puffing a wee bit. The higher ground was still snow covered, being hard packed, the walking was fairly easy. Turing off to head around toward Kidsty Pike, a family that had come up from Hayeswater asked me if they where on the right route for Angle Tarn? They where slightly miffed when I pointed out they would end up in Haweswater on their current route. However, all sorted and they where soon retracing their errant footsteps. 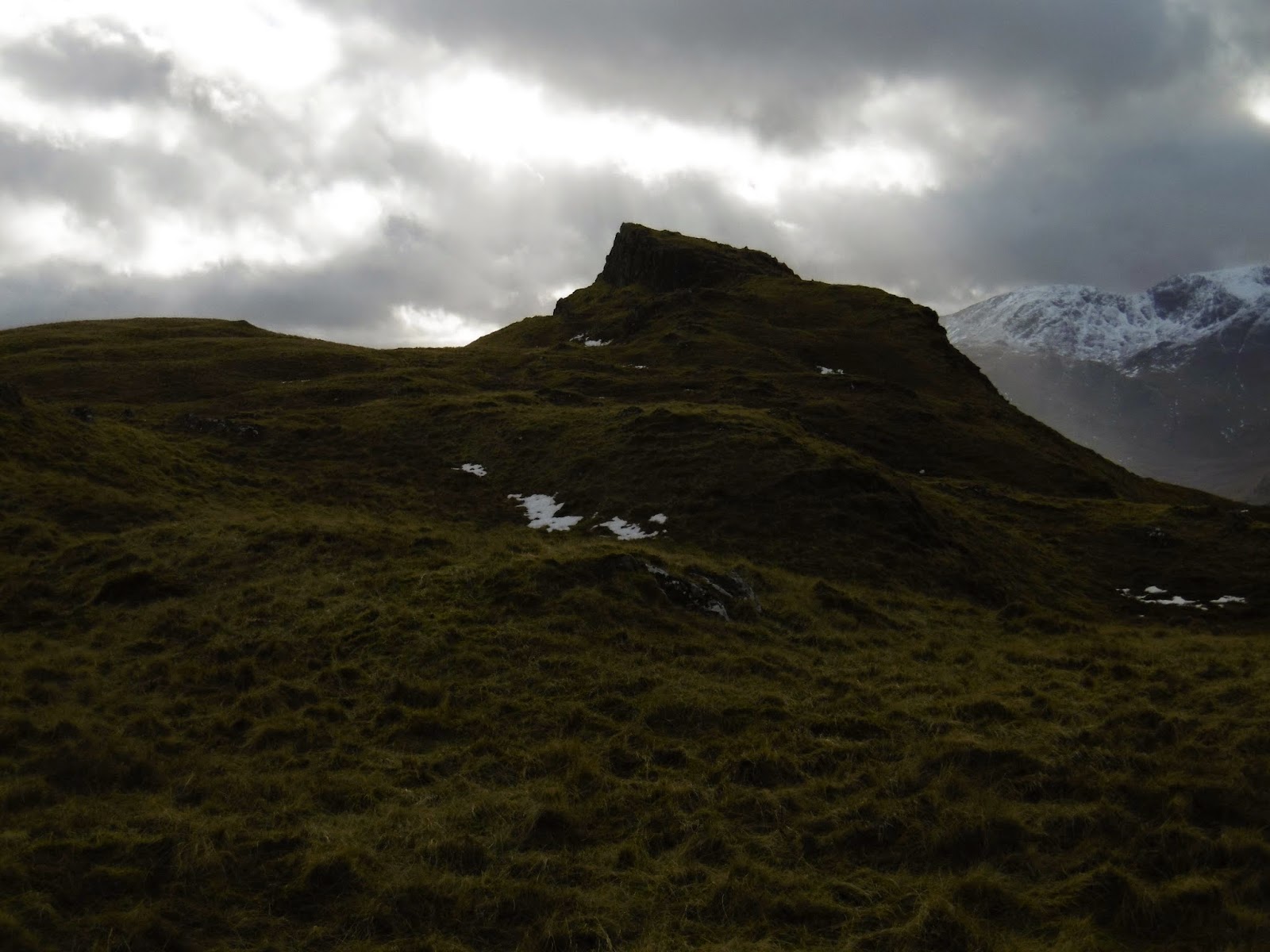 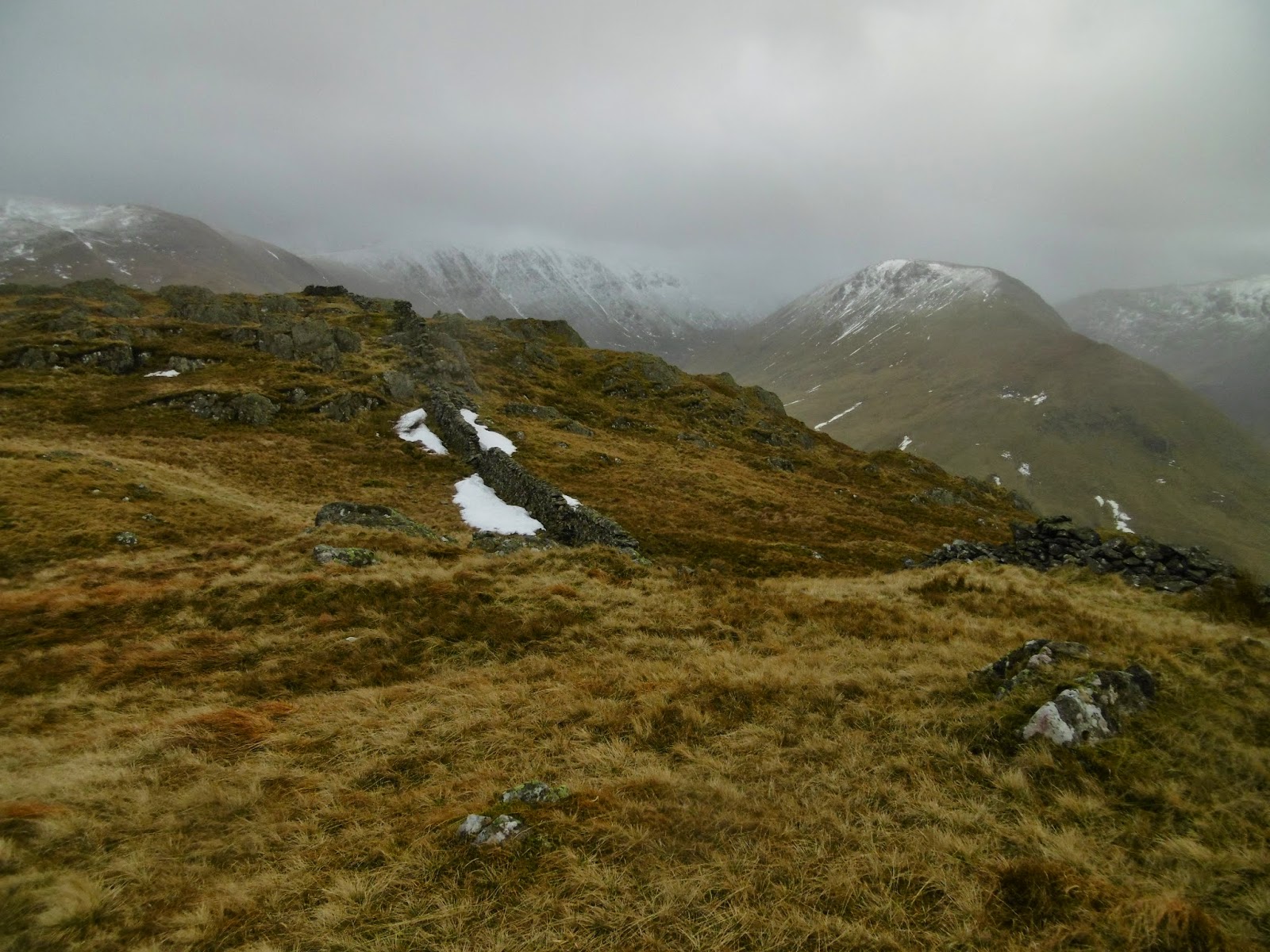 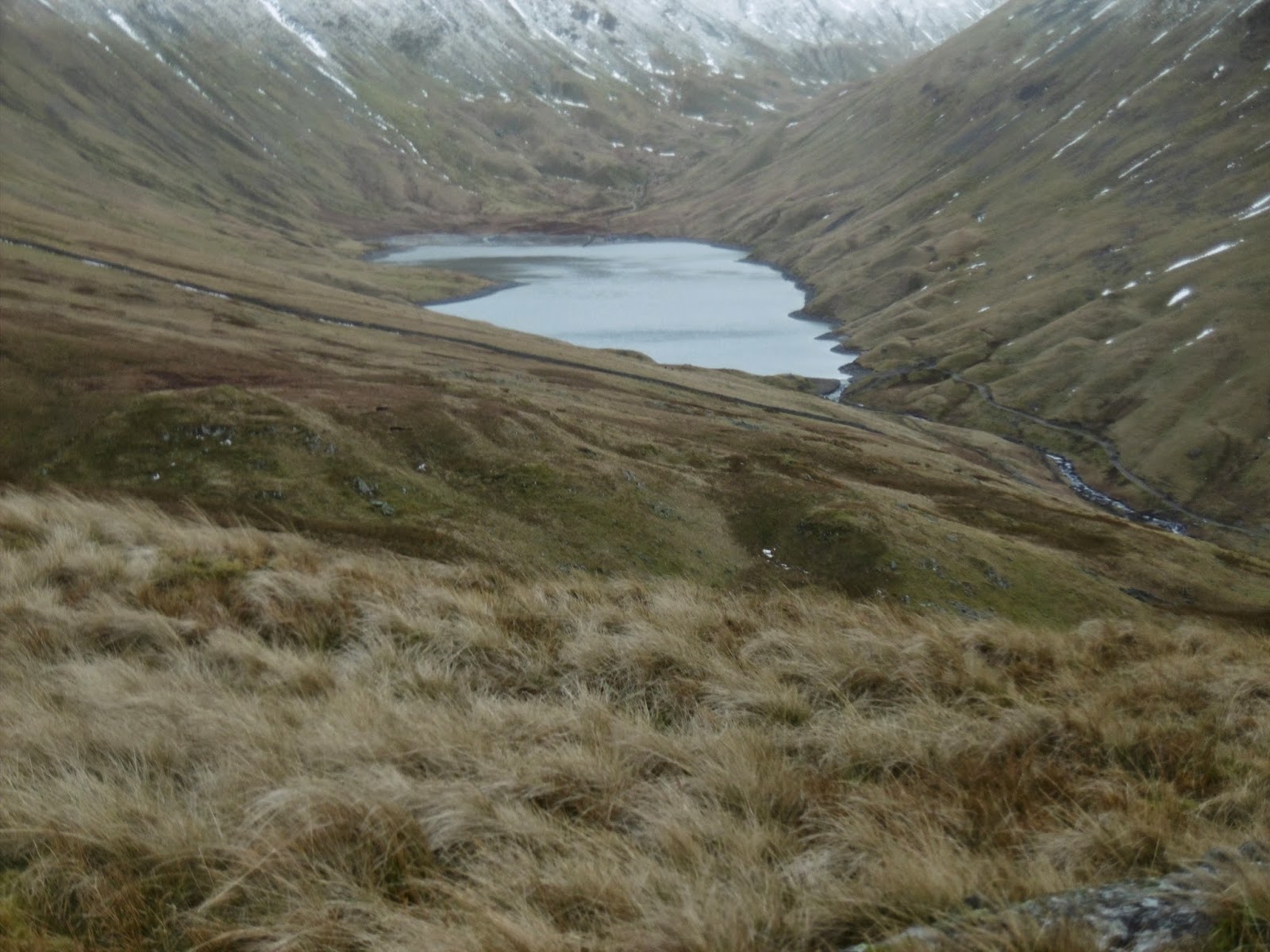 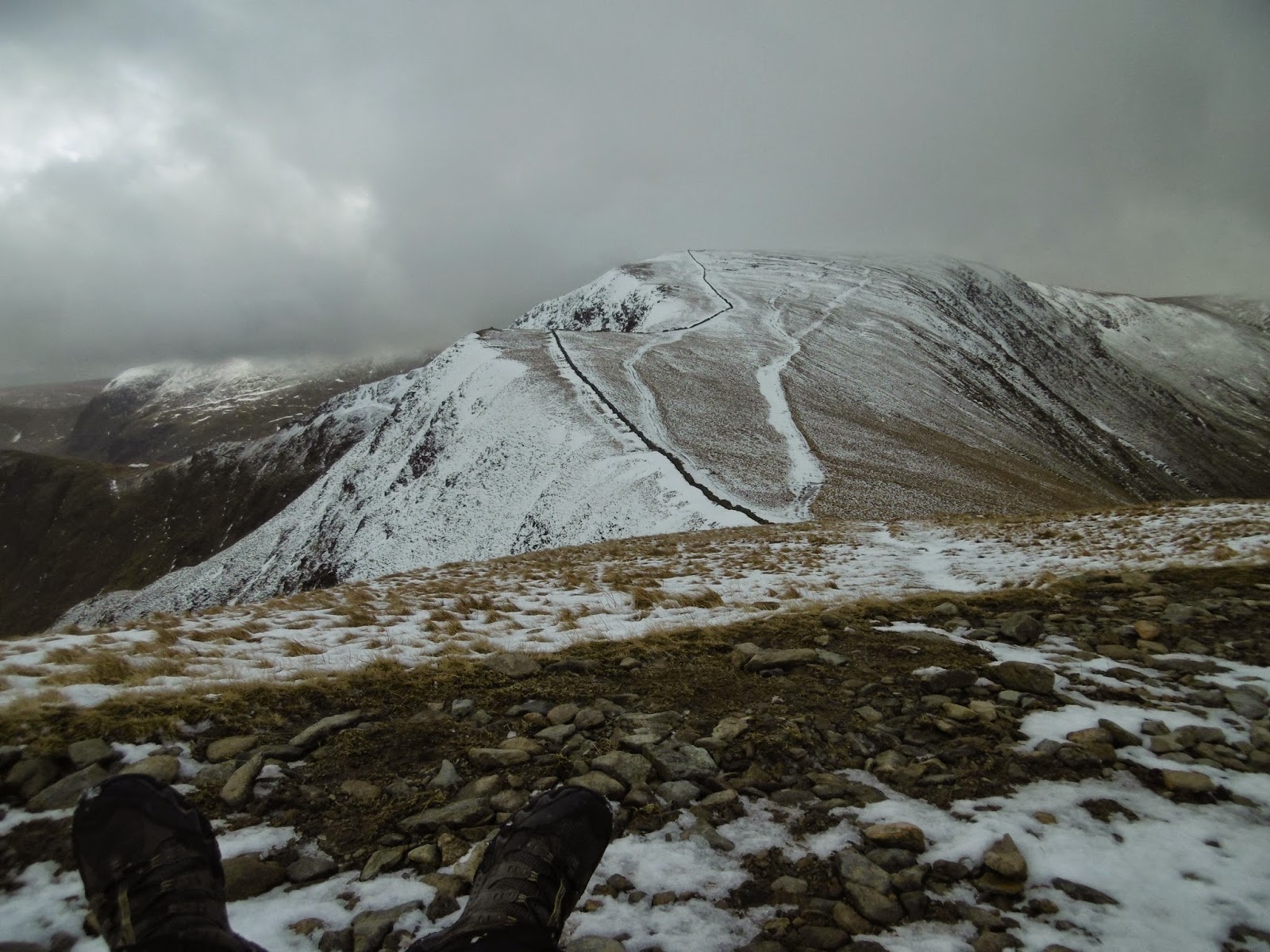 In the strong wind, sitting down to take this picture was the easiest option.

The wind was blasting across the exposed top and it felt raw, not a place to linger! Heading down I had something of a wobbly. My legs went all shaky and gave way under me. No damage done and I got down ok.
Choice of camp spot was limited due to the high wind. Eventually I settled for a place near Bowderthwaite Bridge. Not totally protected from the wind but offering some protection. 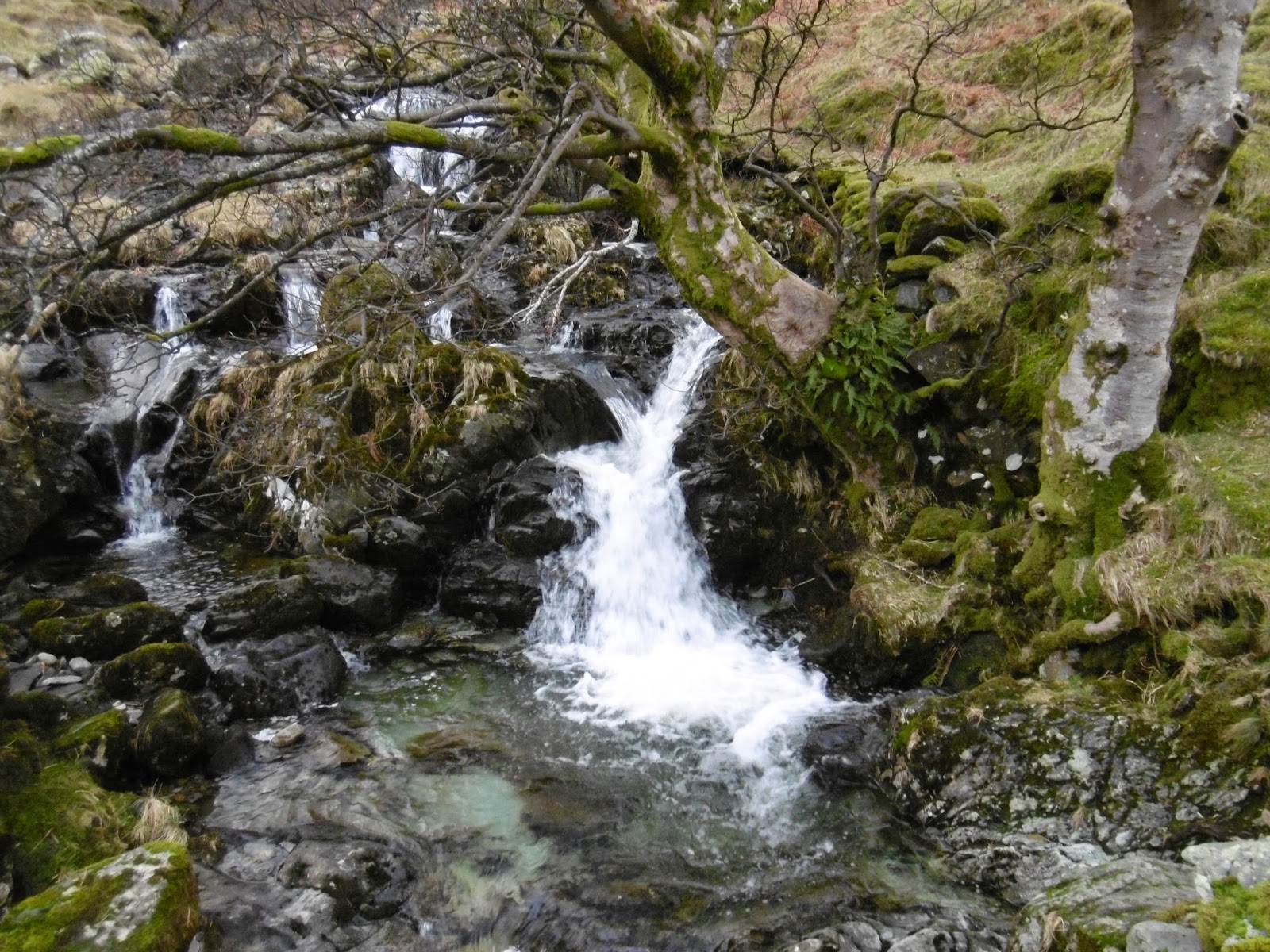 Wednesday morning saw curtains of grey wetness sweeping down the valley. The wind remained strong too. My plan for the day was a simple one. Knowing there would be few places to camp until near Shap, it was decide to follow the path that meanders down by the side of the reservoir and camp near the far end. 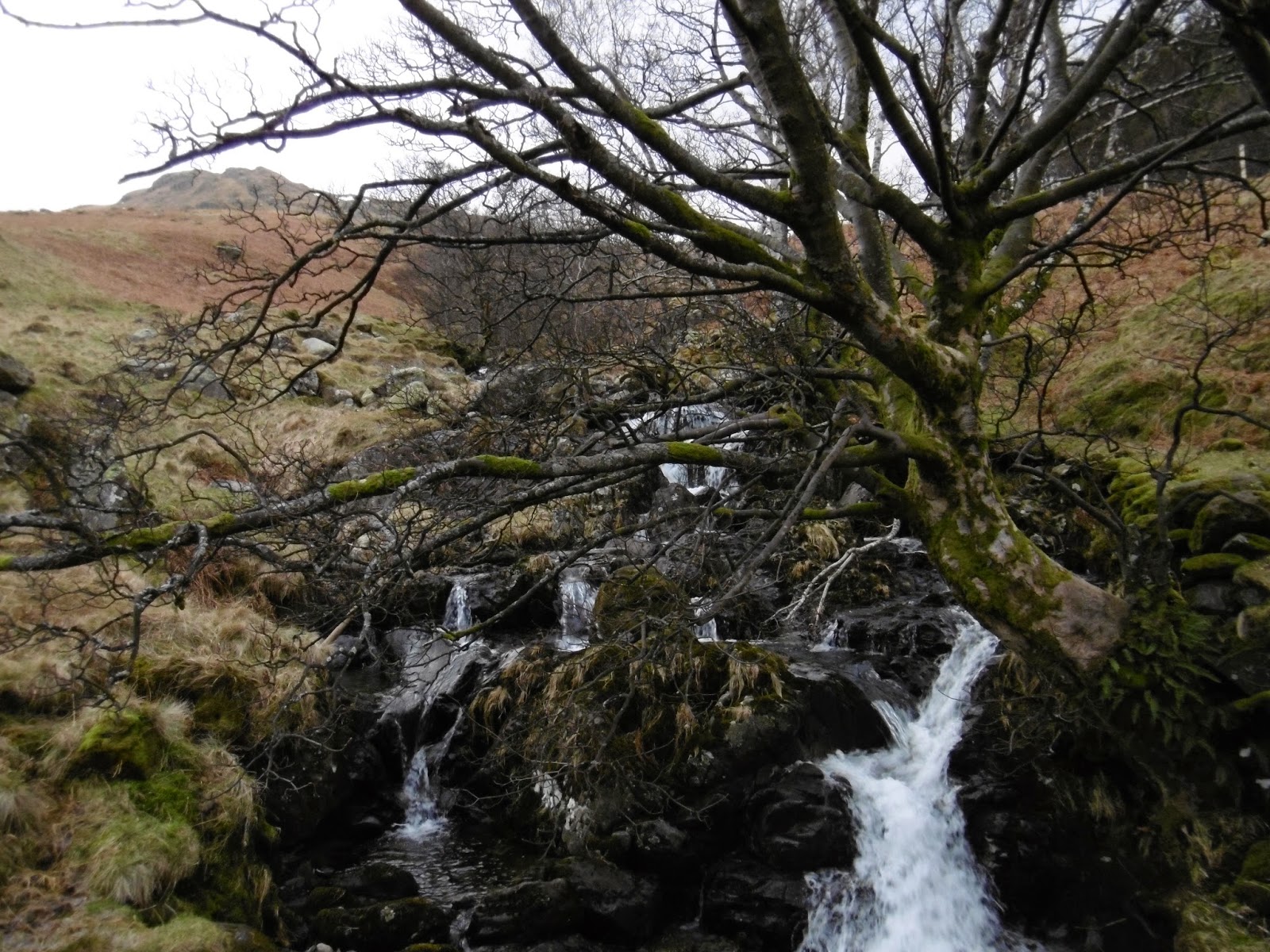 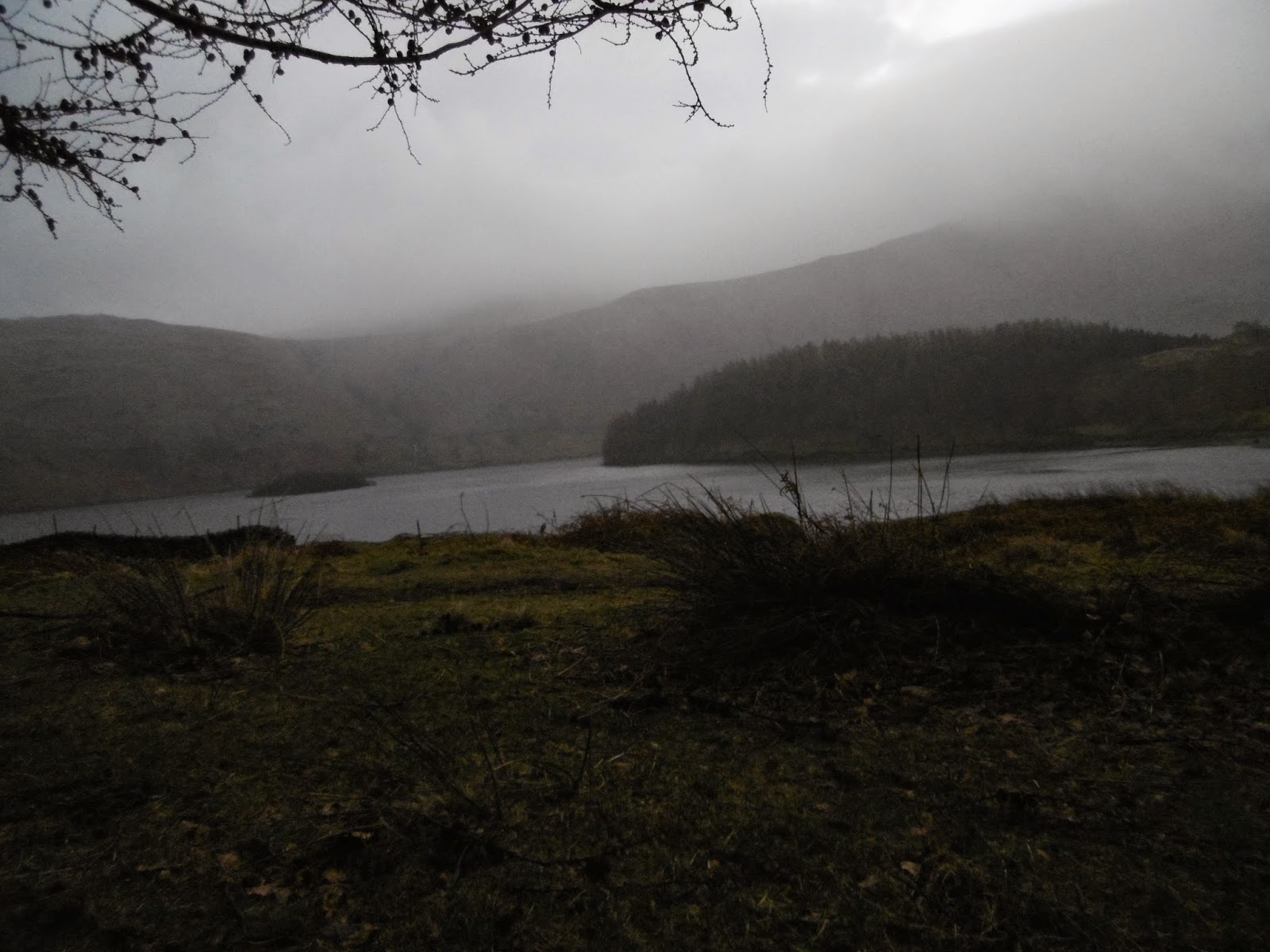 View from the tent Wednesday.
It was leisurely start to the day and despite the weather conditions it was not unpleasant walking. As I neared the end of the reservoir I had been on the lookout for somewhere to camp. By mid afternoon it was blowing a hooley. Somewhere offering some degree of shelter was needed. Unfortunately there was nothing near the village. The woods where heavily fenced off. Backtracking, I headed back up the path a mile or so to a stand of trees I had noted earlier. Walking in to the wind and rain was difficult and I was getting pushed around a fair bit. A group of folk walking down from the car park on the other side of the valley where concerned for my safety ( and maybe my sanity?) However, I assured them I was ok. A bit of juggling and I managed to get the tent up close to an old dry stone wall that enclosed the trees. 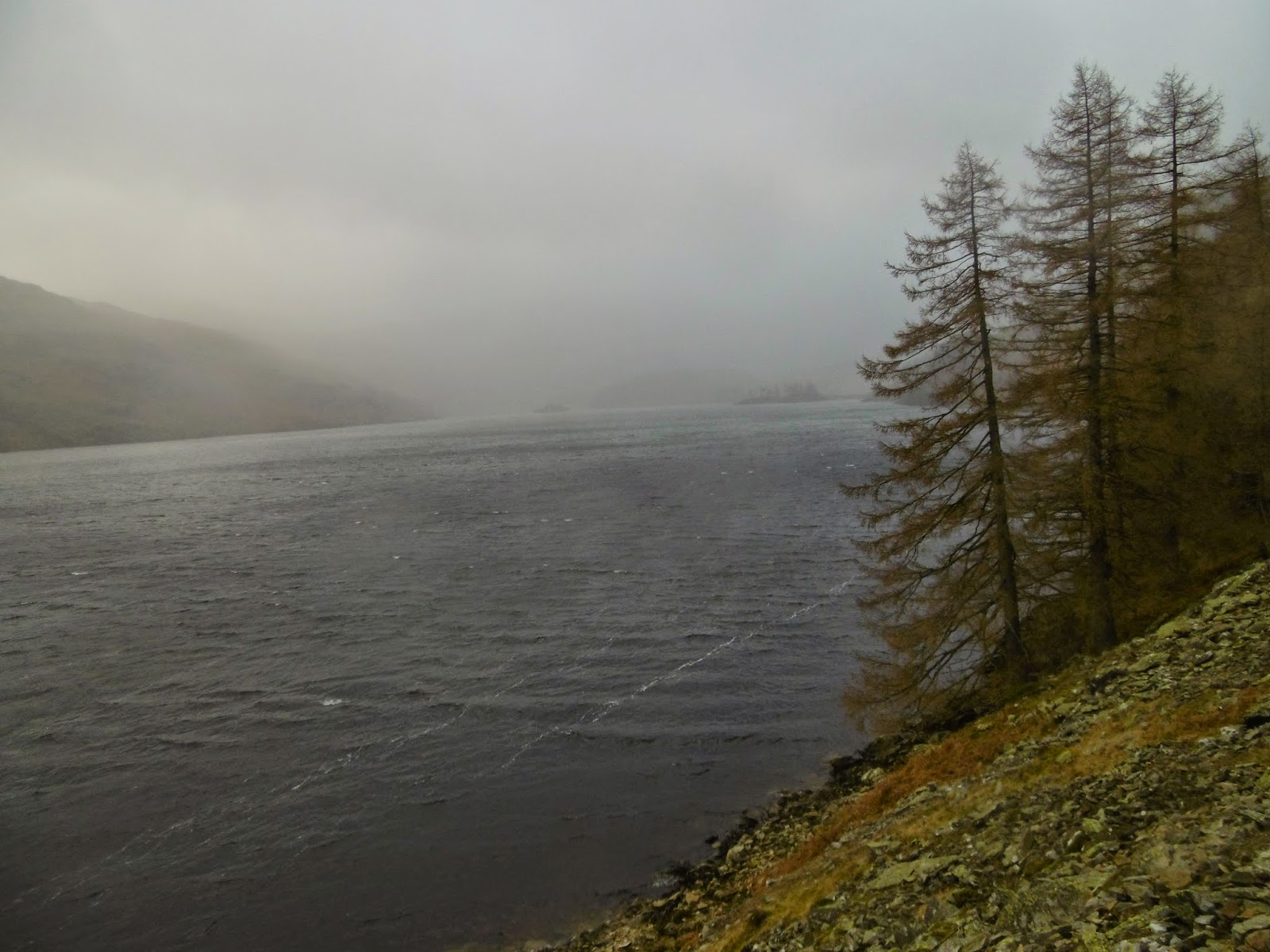 By early evening it was blowing a full on gale. Great gusts of wind blasting down the valley. Despite the protection of the wall, the tent was still shuddering under the onslaught. The trees swaying, creaking, groaning as the wind swept through in a roaring fury. There was the possibility of a tree coming down but that was the pay off of seeking shelter among them.
By the morning the storm had largely blown itself out, it remained wet though. Knowing I was in for a long day meant  being packed up and away fairly early in the morning.  Passing by the village I saw red squirrels busy darting up and down the trees. The footpath to Naddle bridge gave some indication of what was to come. It was wet and very muddy in places.
Showers replaced the rain as I made my way over toward Rosgill. A signpost for the Coast to Coast indicated the path over to Shap abbey and it was convenient to stick with it. Oh my though, conditions underfoot where grim. Where farm traffic had been through everything had been churned to a glutinous mess. Mud in varying densities predominated. Even where there was no actual mud the ground was slick with water and a slip was never far away. Several times I went skating, arms and poles flailing as I strove to remain on my feet. Sheep too had heavily poached the ground. 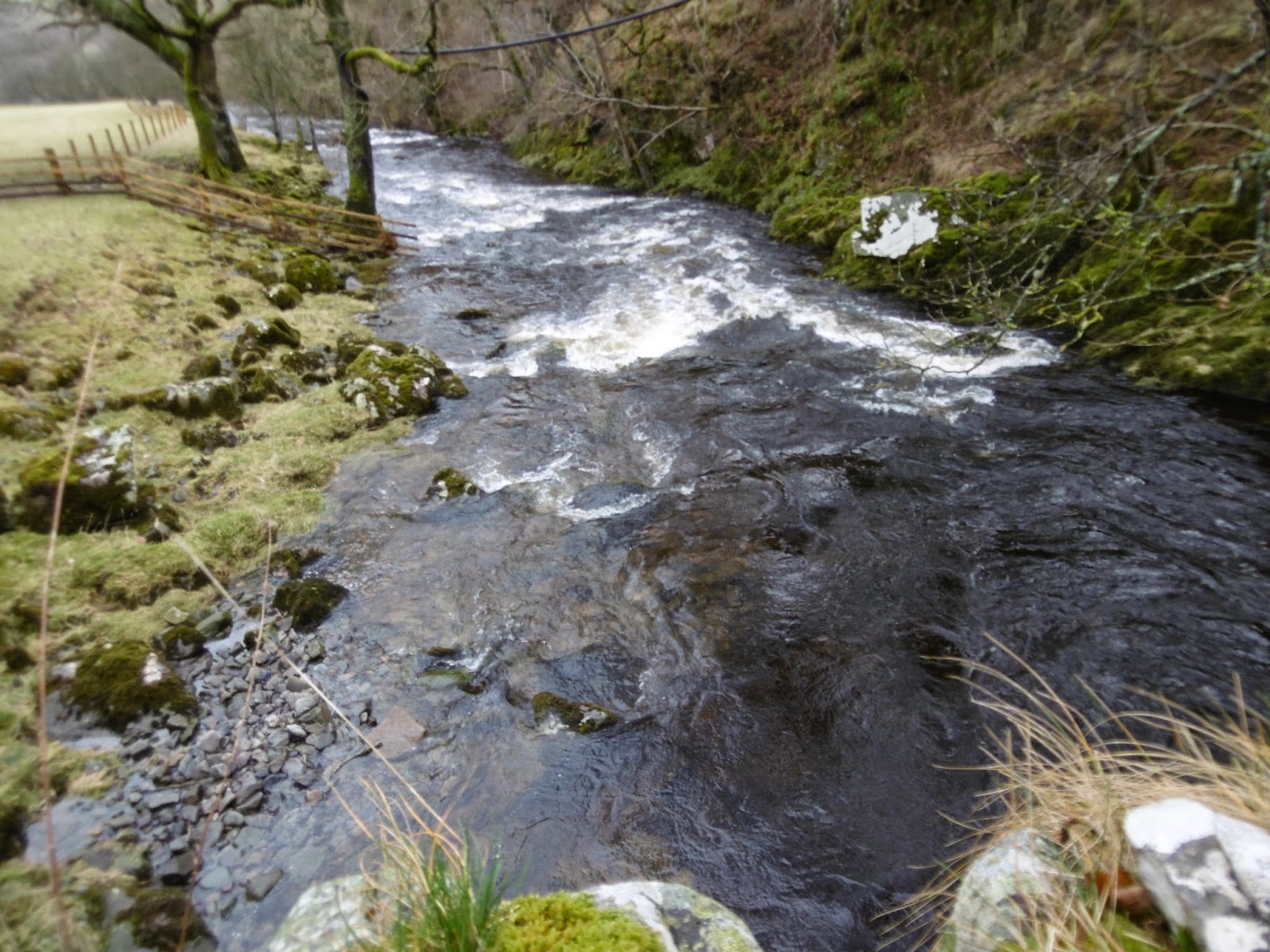 Stopping for a much needed break by the Abbey, I had a ponder over how far to push on to and decided to remain with my original plan which was to head for Orton. 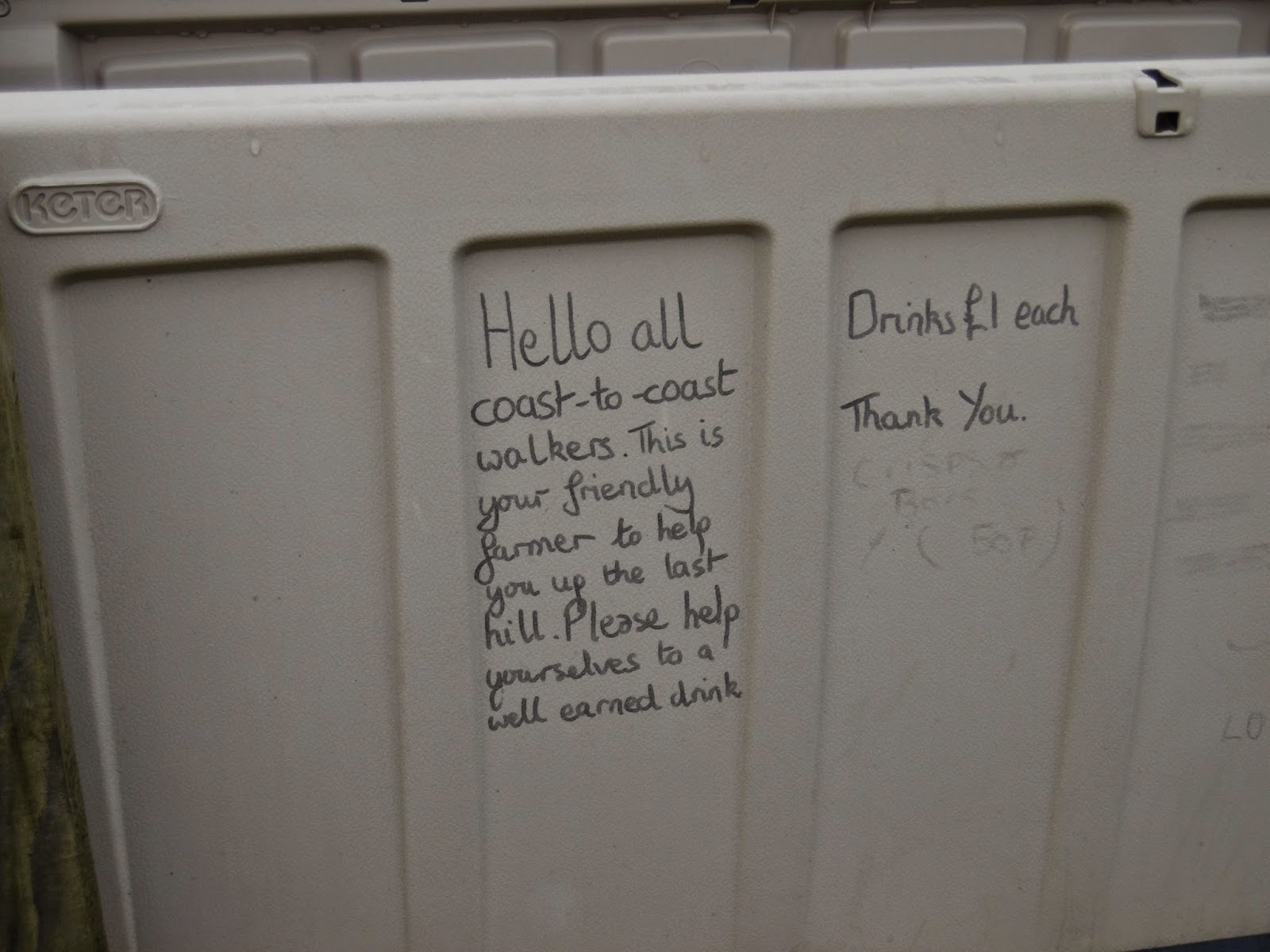 Heading through Shap, I stuck with the CtoC path through more muddy fields to Oddendale. Here I seemed to be betwixt and between. Despite having two maps covering the area, there appeared to be gap in between. This was obviously heavily keepered moorland managed for the grouse shooting fraternity. There where numerous tracks and bridleways heading in all directions. Possibly I would have been better off heading  in a more northerly direction. As it was I stayed on an easterly bearing following an undulating bridleway across the moorland, eventually coming down to a B road two miles from Orton.
Time was getting on as I headed down to the village. Aware that a wild camp may be tricky, I took the unusual step of actually asking a farmer if he minded me sticking the tent up in the corner of a field. His reply somewhat took me by surprise. "Sorry, I've stock in every field!" Quickly assuring him I had no concerns about sheep, his reply was quite amazing. "It's not you I'm worried about, it's ma sheep, a tent might fair frighten them!" Now that is different? So folks, when in sheep country keep your tent on a short lead in case it goes off chasing sheep??  There could be a Monty Python type sketch in there somewhere?
Fortunately I had an alternative stealth camp in mind and managed to get the tent in among some trees by a disused quarry. Not the best of places, wet ground and somewhat muddy but it sufficed for the night. Water was a wee bit dubious but I made sure it was well boiled.
Friday was my last day and I was heading for |Kirkby Stephen.  Coming down by Raisbeck there is a fascinating little one room building. It is an old, original Dame School. People are  trying to ensure it remains preserved. A few more sleety showers on and off during the day but still quite pleasant walking. 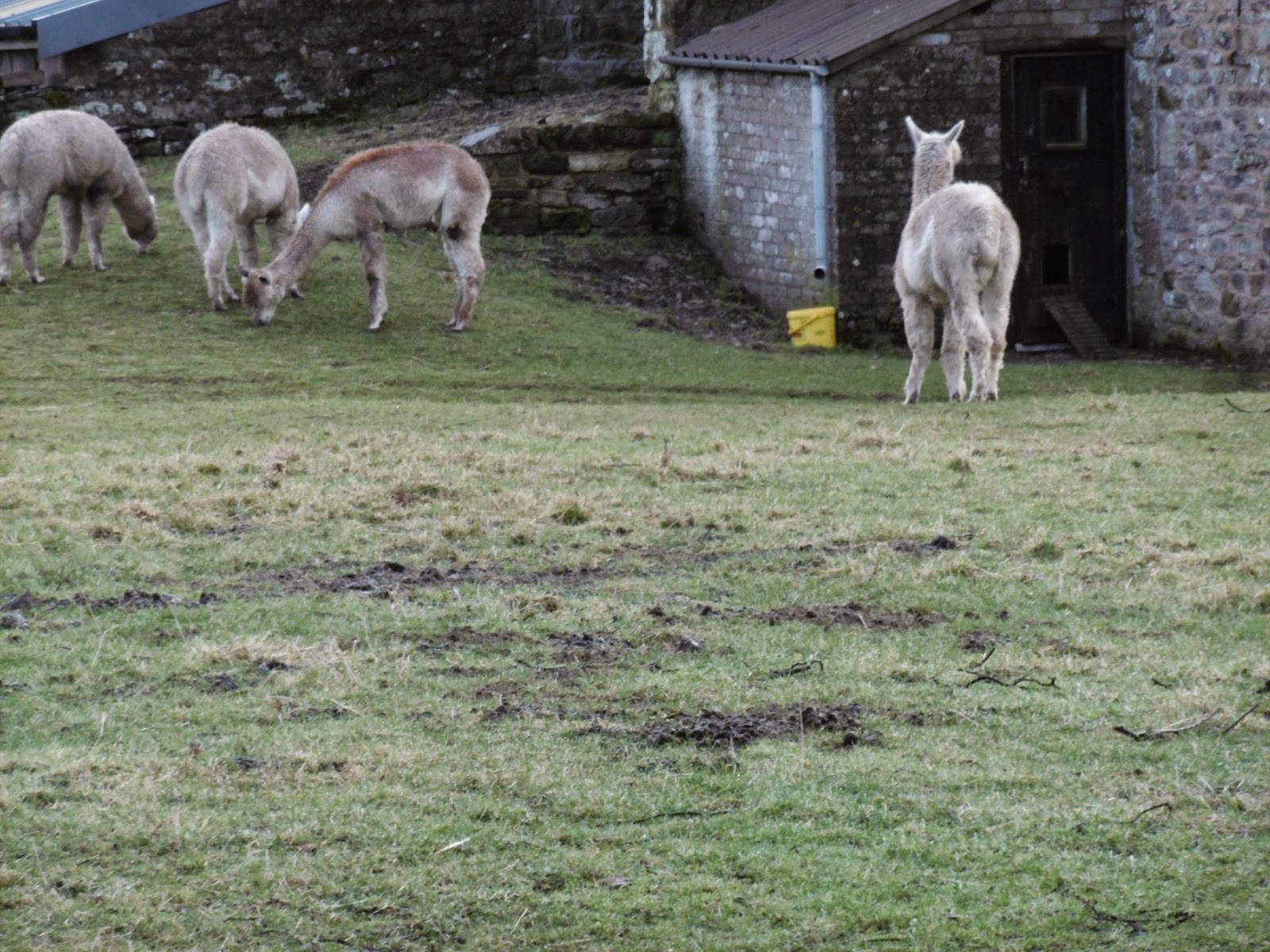 Following the bridleway that heads across Ravenstonedale Moor, I was appalled by the damage  done by off road trail bikes. Not just by the heavily churned up ground, but also the fact that in some areas the idiots had been driving around in circles, causing even further damage. Obviously these people consider the moor their playground and have no concern for the damage caused. 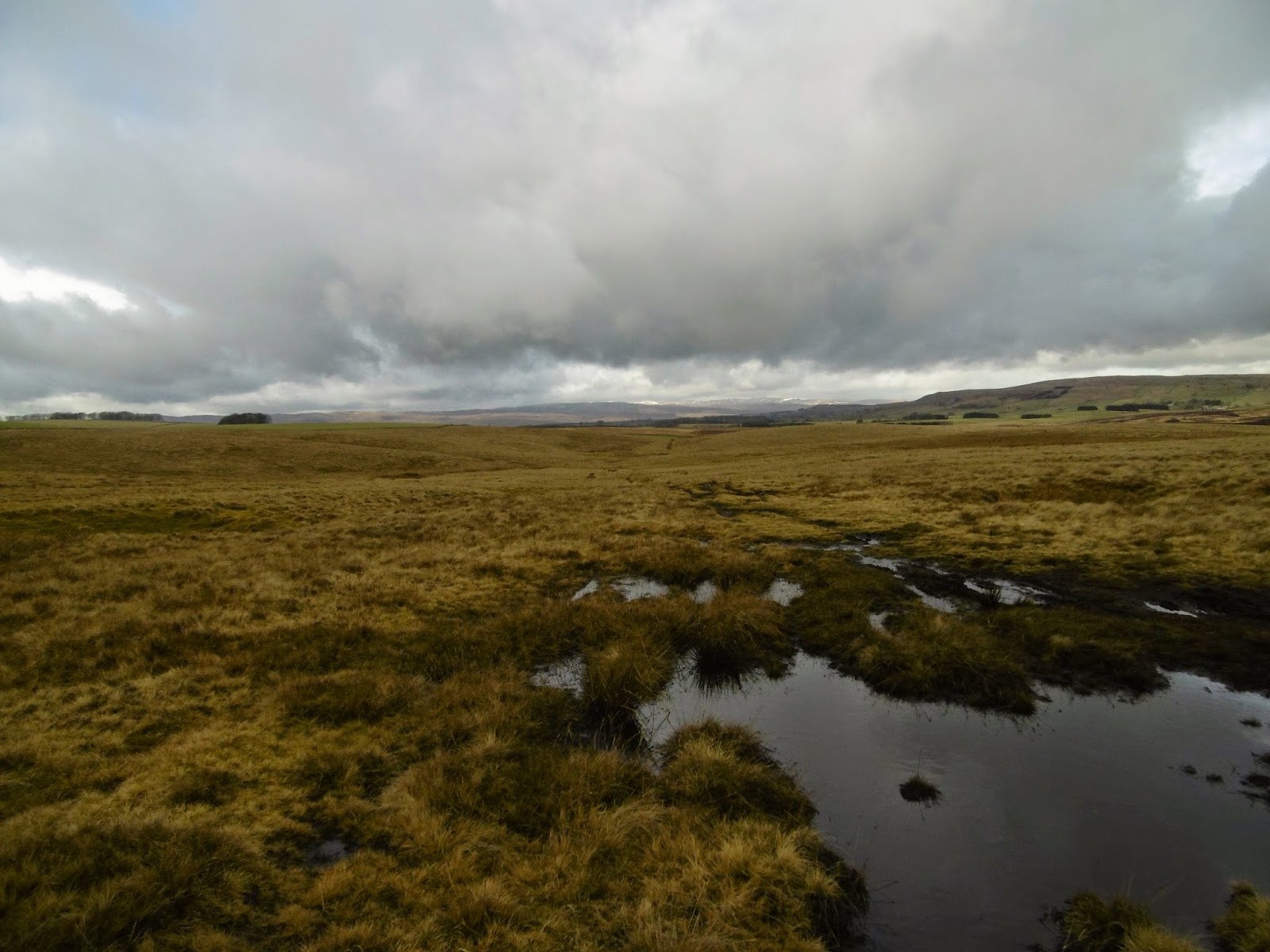 Around by Smardale Bridge and up and over Smardale Fell. More trail bike damage unfortunately. Took a slightly longer route, dropped down to Waitby and then took the foot path over to Kirkby Stephen. Once again, though some very muddy fields. My waterproof trousers are well slathered in mud and much of my kit are showing signs of the muddy conditions experienced.
Overall, not a lot of high mileage, a fair weeks backpacking though. 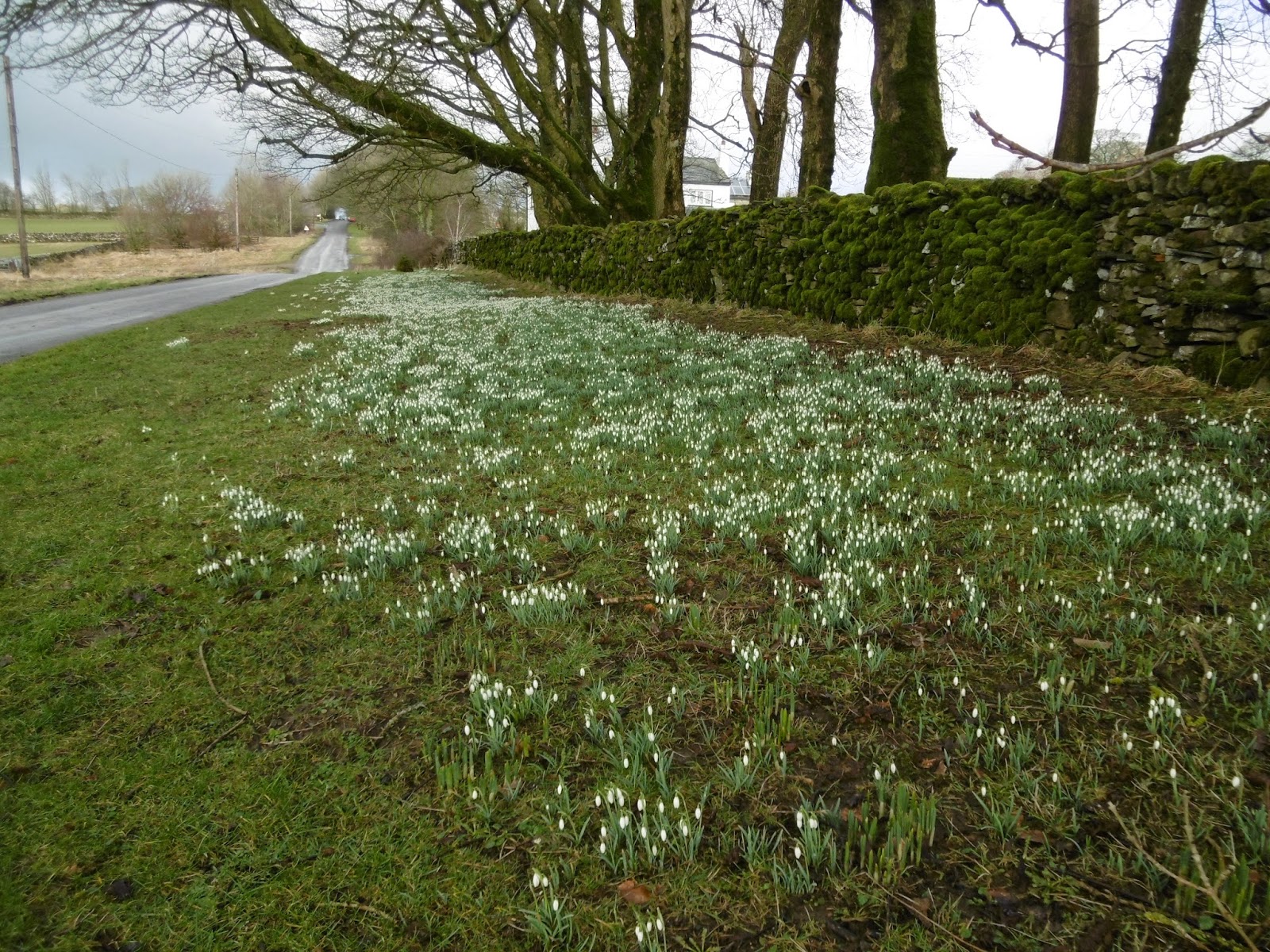