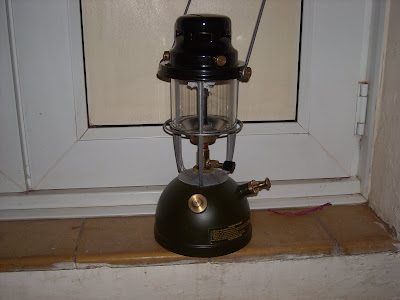 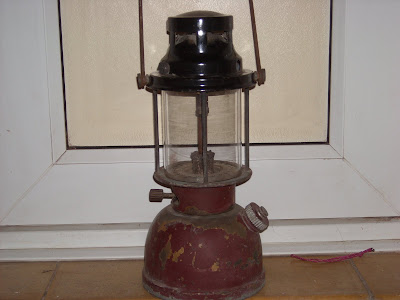 Quite a while back for some unknown reason I purchased a couple of paraffin pressure lanterns; well the seller wanted to get rid of them and I made a ridiculous offer which, to my surprise was accepted. One turned out to be a fairly modern vapalux and the other was an ancient bialladin in very poor condition. Both where put away in the back of the cupboard as something to be worked on at a later date. Recently I dug them out and began some work on them. The old bialladin has had new washers fitted and a replacement hood but I am a tad hesitant in actually lighting it. The vapalux looks almost new and after checking the washers, testing for pressure in the tank, I fitted a new mantle. To be honest, I rather think the person who sold it had little idea of how these beasts actually work. Finding nothing outwardly wrong with it apart from a broken mantle, which I replaced there was only one option, actually firing it up. A quick trip to the local diy shop, unfortunately I could only buy paraffin in 4litre containers, some meths and I was ready. Lighting these pressure lanterns does involve a certain procedure; firstly, the new mantle has to be set fire to; a nice bit of smoke and scorched sort of smell wafted around the flat, next came the priming, air release valve open, meths poured in to priming cup and lit, leave well alone until almost all flame has gone, screw shut air valve and a few tentative pumps, splutter, splutter, more flame, a bit of smoke, some fumes and the lamp purred into life. After that it was case of bringing it up to full pressure and seeing what would happen, the lamp ran excellently, chucking out loads of light and heat and that slightly pungent odour that the lanterns give off. Whew! when I get up courage the ancient lamp will be worked on too, doing these sort of things on the draining board is possibly not the best way however, I have little option.
Posted by Dawn at Thursday, February 11, 2010 7 comments: Links to this post 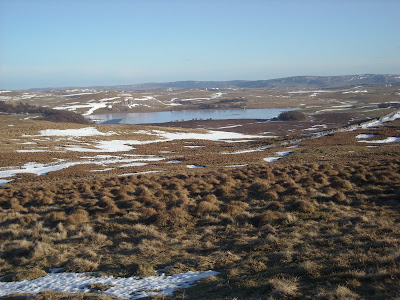 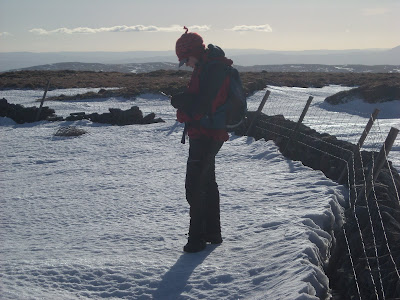 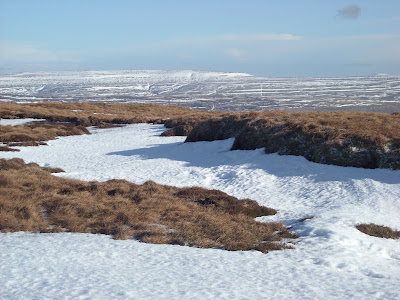 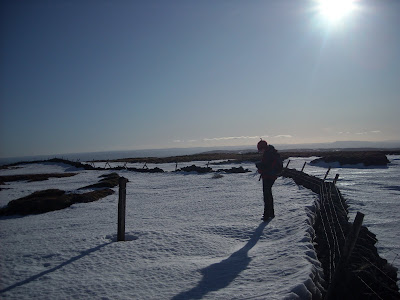 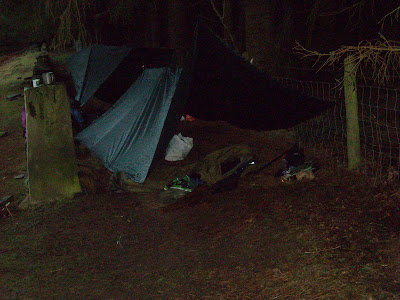 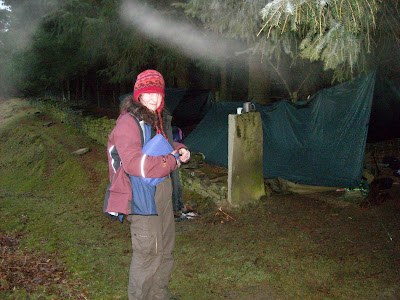 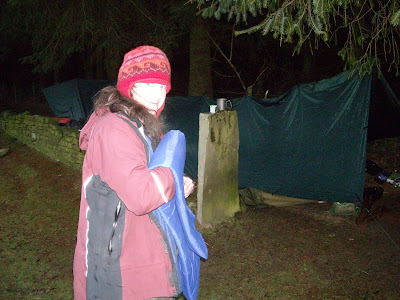 Rachel and I had agreed to meet up for a few days over her birthday. Rachel, being in nursing, which can mean long hours and low pay, had asked that I arrive on the Wednesday late afternoon, which I duly did, stopping over at her place that night. It can be fair to say that Rachel is an enthusiastic outdoor woman, ever keen to learn new skills; thus it was that on the Thursday, after picking up essential bush craft supplies of eggs, bacon, sausages and other items of food, we headed for a wood not far from leeds. It was to be Rachel's first experience of a night out, bush craft mode, under a tarp and in a bivi bag. It was cold as we made our way through the woods, being unsure of what equipment Rachel had, meant that I had packed a extra gear and some of it did come in useful but it meant extra weight. A river threatened to bar our way but the lass was having none of it and swiftly picked her way across, whereas I struggled a tad, my old leaky boots swiftly filling up with icy water. Another river crossing and then a quick heads together to decide where to pitch; the original choice was a mite exposed to the rising wind that was sweeping down the valley; finally we opted for a fairly level space tucked in close to the wood. With the light fading fast, we divided duties and while I erected the tarps using a network of guy lines, Rachel bustled around swiftly bustled around gathering firewood. With impressive skill, using her little tinder bag and steel striker, no matches here if you please, she soon had a fire blazing merrily; equally noteworthy was the fact that she did not make a common mistake and produce too large a fire. With a compact but hot fire burning well, glowing coals where soon produced and Rachel popped in tin foil wrapped chicken and potatoes. An excellent supper of crispy chicken and baked potatoes washed down by a mug of hot chocolate. Sleet and rain, driven by the rising wind scudded down the valley but we remained comfortable. As yet the medical problems I have been experiencing made things a tad tedious during the night. Pheasants clattered off in the dark protesting loudly, something had obviously disturbed their roosting spot; owls called to one another and a dog fox barked close by, possibly he had been after the pheasants? We where awake early and did not have time to linger, Rachel's car had a hot date with the garage for it's mot before we headed up in to the Dales. We had to hustle a bit but still had time for sausages and mugs of tea before moving on. Mot over and we took to the road once more; our destination was Malham. Unable to book in to a bunkhouse or camping barn we opted for the luxury of the youth hostel and we managed a room to ourselves. Having booked in we headed around to the pub for a meal; a very rare thing for me. The night was clear and frosty with the full moon riding high; being a practical lass, Rachel made sure a few lengths of climbing rope where to hand and she kept a wary eye on me!!?? There was a heavy frost overnight, however the morning was bright and crystal clear, the clarity was amazing with stunning views of the Dales in all directions. Our first goal was Fountains Fell, the initial start from the car was a chilly one with a biting northerly wind, but the ascent up the fell side soon warmed us. The ground was heavily frozen and many areas still had quite a quantity of snow which meant some marvellous walking as we made our way upward plodding on a long avenue of hard packed nieve that would have made an excellent ski run. We joked about having failed to think about hijacking the hostel metal tea tray, it would have made an ideal sledge. Despite the cold and piercing wind, temperatures where well below zero, we where loath to leave. The panoramic views from the top where breath taking; it has been a long while since I last experienced such a mix of awesome weather and grand scenery. Our next objective was a nearby trig point, a strangely addictive pastime, akin to bagging tops but somehow different. On our way across we spent time deciphering tracks in the snow, a fox, the outline of where his tail had brushed in the snow, quite distinctive, also the spot where he had pounced searching for some unsuspecting creature below the snow cover. The spot where a hare had diagonally crossed a bank of snow and over a wall; the prints of a largish bird, quite probably a grouse and strange little runs of earth where moles had tunnelled very close to the surface. From the trig we descended to a bridleway that would lead us back to the car. Gates through the dry stone walls where heavily banked with snow which made for some interesting manoeuvring to cross them. A good day out in superb conditions. The following day was a short walk to bag another trig point and then journey back. Altogether a good couple of days out, varied and interesting and with some good company too.
Posted by Dawn at Tuesday, February 02, 2010 3 comments: Links to this post