Pieman and wild 'wimmen' on Plynlimon

Well, in fact it was myself and Mike, (northernpies.blogspot.co.uk). Plynlimon is a  Welsh variant of Pumlumon. The last time Mike and I had visited we had walked in from Machynlleth. Bad weather had frustrated our plans. Thinking things over I realised that previously, a few years back, I had come in from the other direction. A reconnaissance trip by myself formed a plan of action. Mike was enthusiastic, dates and times where agreed upon. Once more we arranged to meet on the train as we came through Birmingham. Mike had left route planning to me. A challenge indeed to be leading the 'Pieman'! A successful link up on the Monday and no delays with the trains saw us arriving in Aberystwyth late afternoon and catching the bus onward to Nant Yr Arian. 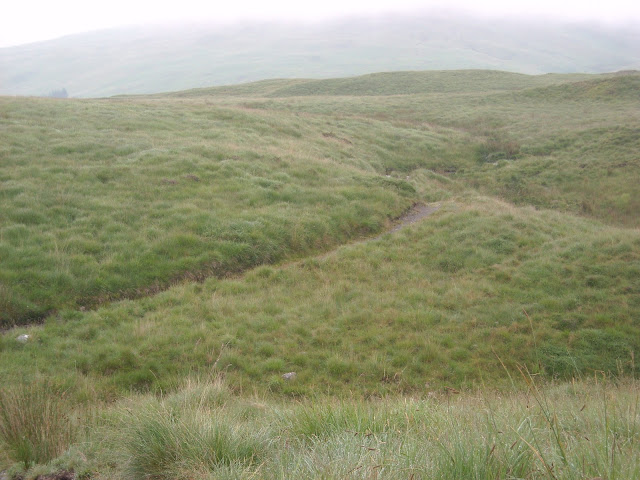 A couple hours of walking, involving rough tracks and a slightly awkward stream crossing and we set up camp for the night. Camp spots in this region are some what limited. Much of the ground is wet and boggy. Mike, enhanced by a top just behind us, nipped up to add to his little list! As for me, I was reserving energy for what was to come on Tuesday.
Tuesday morning was damp with low cloud on the tops. We started out in waterproofs and they remained on all day. Our way on led us around by Aber Peithnant. Some tracking across a hillside with knee high bog grass and on to a forestry track. That was only a short interlude. In all fairness I had warned Mike that the next bit was not easy walking. However, I think even the indomitable Mike was a tad taken aback as I led him up through bog and dank, wet forestry. Certainly we both breathed a sigh of relief once we came out of the forestry. By now it was steadily raining, visibility was poor and it it was windy. We stopped for a break. Knowing the steady haul ahead of us, I for one needed to boost the energy levels. There is a track that leads uphill beside the forestry, stopping just short of the main ridge. Mike had his eye on a top just off our main route. While he headed off to do that one I stayed with the rucksacks and had another quick handful of nibbles and a deep drink.Once Mike had returned we continued onward and upward. In all fairness, the Pen-y-Drawsallt ridge is not a difficult proposition. Broad and not that steep, it weaves and undulates around rocky outcrops. Even so, the sight of the Plynlimon cairn looming out of the murk was a welcome sight. The broad grin on Mike's face made it all worth while. The rain had eased somewhat but it remained wet and grey. Using the fences that cover much of the top we hand railed around by Pen CerrigTewion. From there it was a long descent down toward  Craig y Fedw. Picking our way down Pantau r Brwyn was steep going. Knees hurting in protest, rough ground covered in deep vegetation made it hard to pick our way down. There was a big sigh of relief when we finally reached the Hengwym valley. 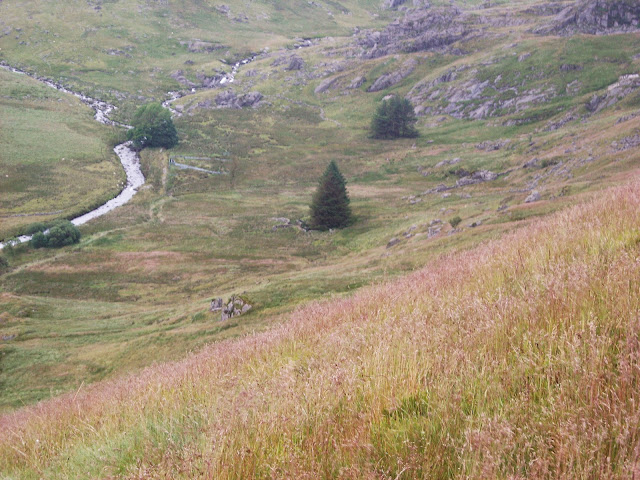 There are two ruined farmsteads in this part of the valley. Neuadd Fach and Hengwm Annedd. One of the two was abandoned in the nineteen thirties. They where part of the outlying farms that once farmed in the area. There was a village nearby, Nant-y- Moch. The reservoir that drowned the village in the early nineteen sixties, bears the same name. Now the valley is a wet and boggy landscape. However, at one time there where fields and the area was thickly covered in birch trees. We found a lovely little camping spot and it was with a sigh of relief when tents where up and a brew on. For me at least, it had been a fairly hard day. Mike is made of sterner stuff, at times he appears indomitable! 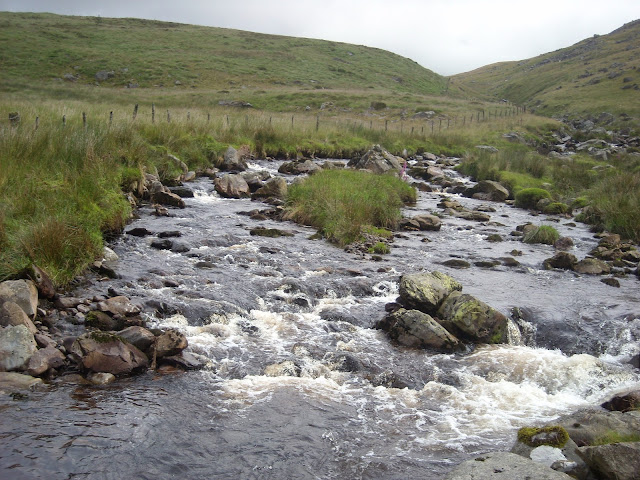 Wednesday was penciled in for an easier day? The temperature had dropped overnight making for quite a chilly night. Our goal for the day was Carn Hyddgen. Making our way down the valley to the footbridge was a bit of a nightmare. The ground was total bog and made for hard going. Initially the climb up from the bridge was steep going and I was struggling a wee bit. With encouragement from Mike I finally made it. The weather cleared up as we made it up to the two cairns. It was lovely to just to sit and drink in the view. 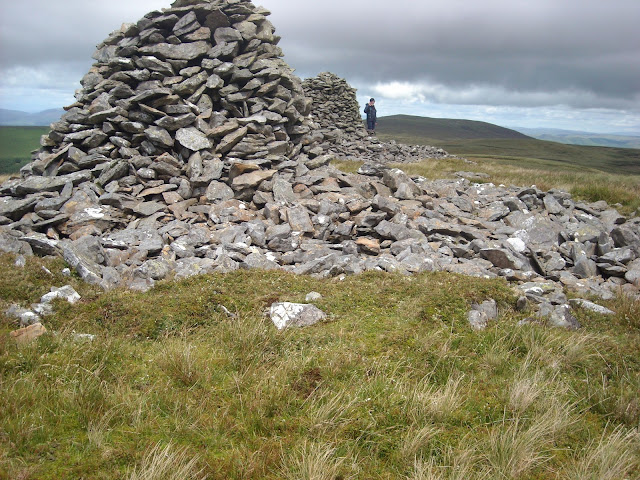 It was leisurely drop back down through boggy hillsides to the path that runs up through the Hyddgen valley.  There was no messing around this time; it was case of trouser legs rolled up and a paddle across the river. With boots already saturated it made little difference on wearing them to ford the river. Safer too, the rocks where very slippery. 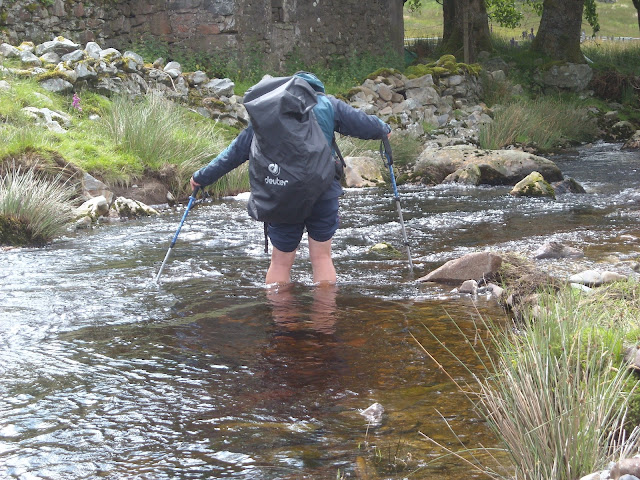 An early return to camp and and an afternoon just pottering. 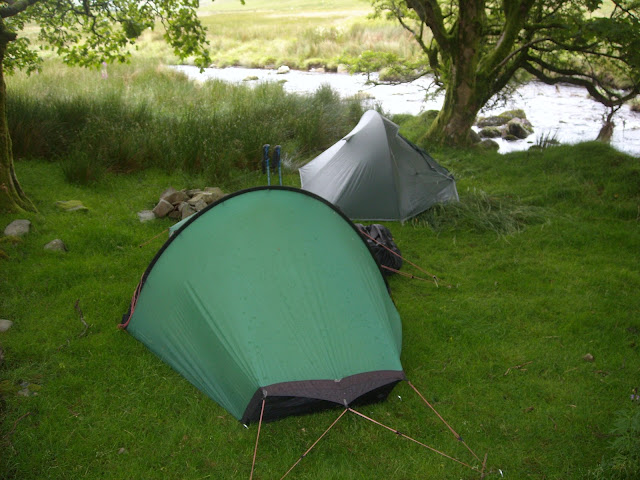 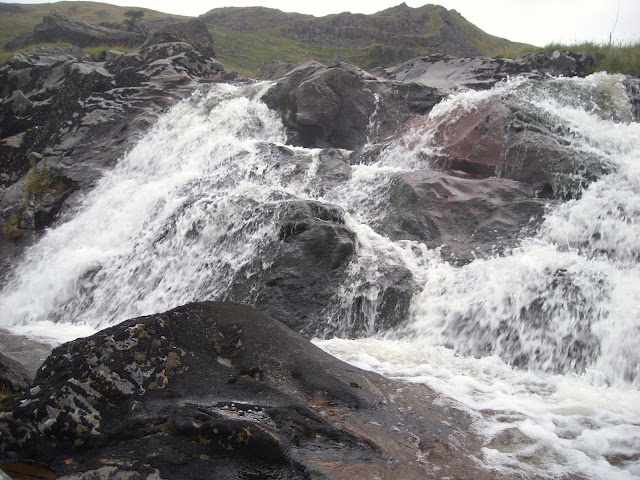 Thursday was going to be a longer day. Rain during the night had cleared away by early morning. A luxury indeed to be starting off in dry weather. Once more it was a ford across the river. Both of us had waterlogged boots, however, I had waterproof booties to slip on and keep my feet dry, or least just a tad damp. Mike, as a founder of the barefoot boot, bog trotting association, elected to travel through the boggy terrain we where following sans boots. He sounded so happy as his feet squished through mud and bog. He hummed with delight as he found a luxuriant patch of sphagnum moss.  It would be fun to see anyone's reaction as they followed our tracks along the path! 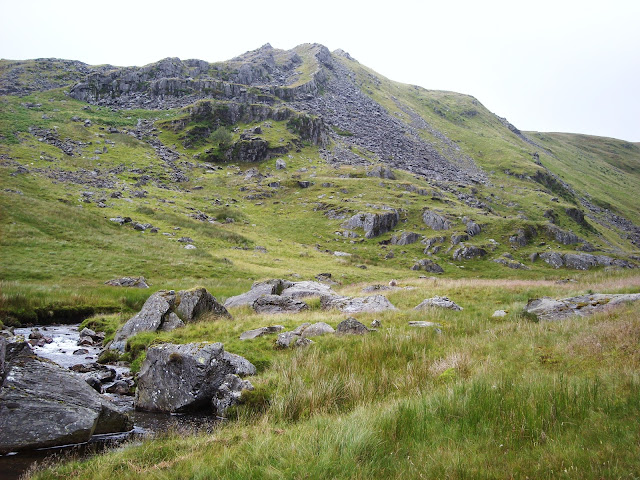 Amazingly the day remained dry and warm enough to walk to walk in a tee shirt. Some steady walking brought us to Bugellyn. Now a ruin but once again once quite a quite large farmhouse. A long steady plod up to Waun To. Mike had his eye on a nearby top and I was content to just sit and relax for a short while and listen to the skylarks. Not feeling good and knowing we still had a a good couple of hours walking in front of us I took some medicine and topped up on my fluids. 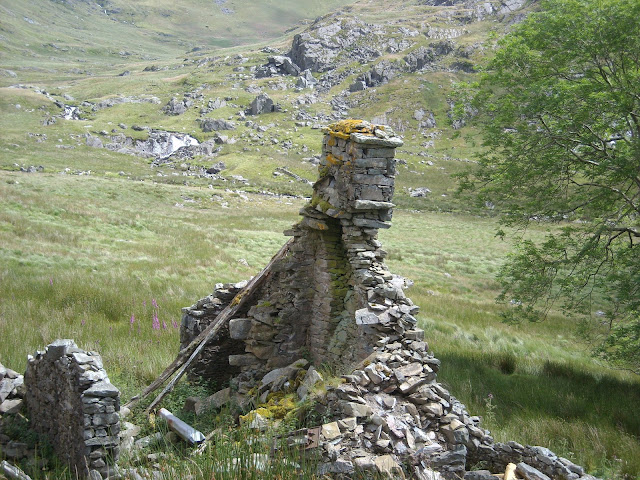 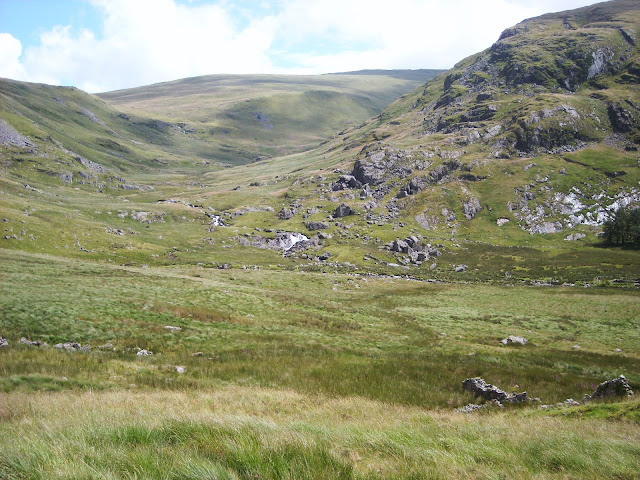 Steady walking over undulating tracks took us over to Hafodwnog. Along the way tired bodies had to hauled over padlocked gates. Rain was heading in as we climbed our last hill. Our camp for the night was on high ground above Hafodwnog. Quite deliberate a choice with good views over the valleys way below. Being tired I pitched the tent facing incoming rain but was too far gone to bother. Rain continued on and off through the night. Early morning saw everything shrouded in thick cloud. By the time we had packed up and got underway, the weather had cleared, giving splendid views. Our day was a short one, we where heading for the heady delights of  Machynlleth. A long drop down to Cwmyrhaiadr and then a leisurely stroll down the lane before heading uphill once more and then turning off to drop once again, following the track over to Glanmerin. It was then on to Llyn Glanmerin across the |Glyndwr way and then a steady drop to skirt the golf course and in to town. We reached town early afternoon and by late afternoon we where enjoying the luxury of hot showers and clean clothes. Sheer bliss. Saturday was the day for heading back. Overall I would say it was a successful trip. 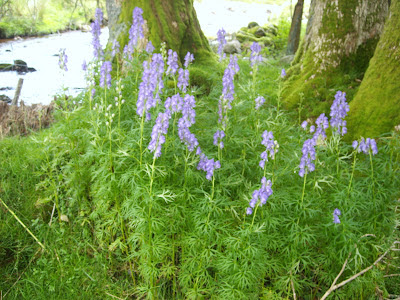 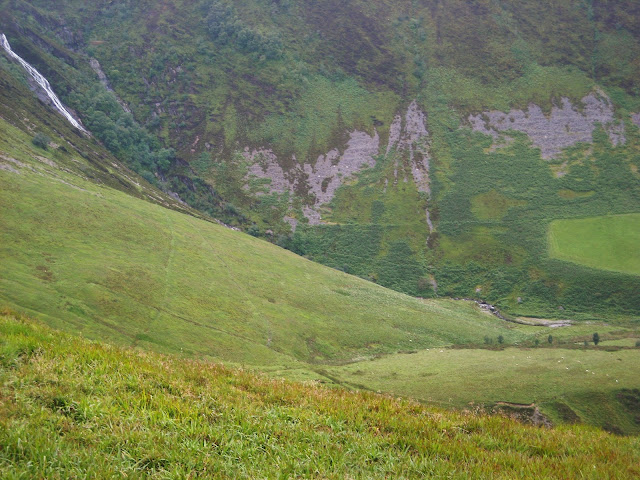 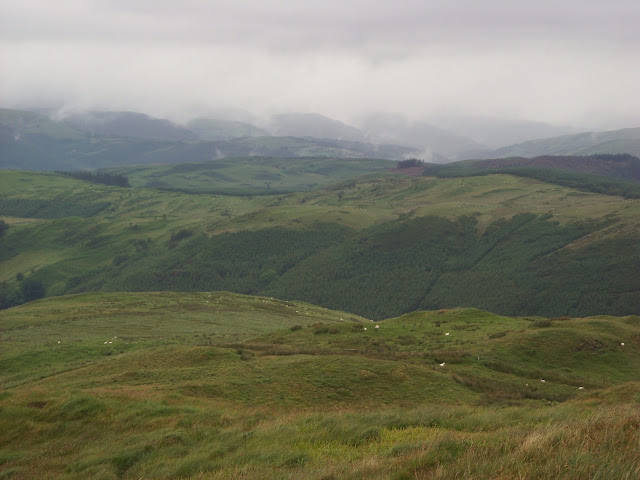 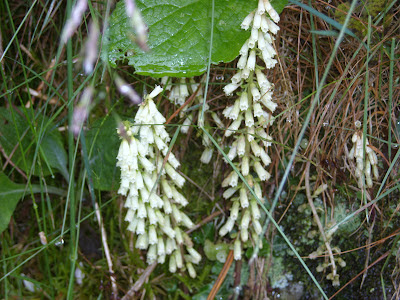