Plans had been shuttling back and forward via e mail between Mike and myself (northernpies.blogspot.co.uk) Several ideas where suggested, changed, rejected or modified.. However, travelling up on the Thursday, I arrived at kirkby Stephen rail station to be greeted with the startling sight of Mike labouring up the path bowed under the most humungous rucksack. He was accompanied by the new backpacking apprentice, Lucky. A very friendly pup but still a tad uncertain of this backpacking malarkey.
Our route was in the direction of Lammerside castle. Mike had proposed we bag the little top of Birkett Common. A rising wind and a heavy rucksack saw that plan scrapped. We now meandered around to High Intake Gill. A wee bit of shuttling around steep ground, boggy bits and quite unsuitable places to pitch the tents, until finally we opted for a place somewhat exposed to the deteriorating weather but not a bad spot. Mike hitched his tent to a bit of fence whereas I opted to use a few large rocks to ensure the tent pegs stayed put. 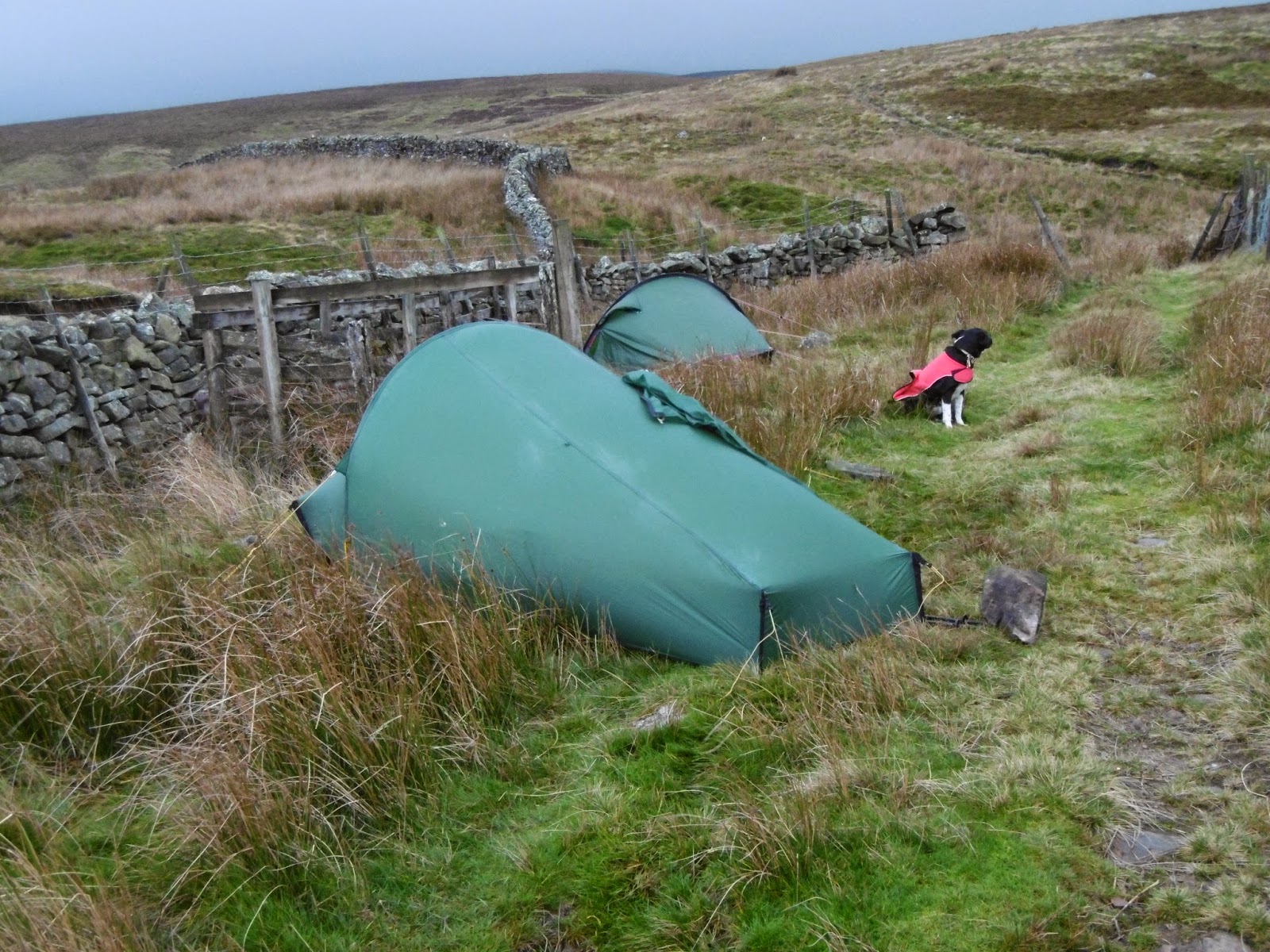 Friday morning saw a brief lull in the storm driven wind and rain. It proved to be a very short break. We packed up wet tents and set off in stormy conditions. Vaguely we headed up and across rough, boggy ground. The wind was blustery, the rain heavy. Our goal was to find somewhere a  bit more sheltered out of the storm. On the map the area around High Sennerskeugh looked promising.  Somewhere along the way the  rain went from heavy to torrential. We crossed what possibly was Long  Gill and found a flat grassy spot in a large sheep fold. Within an hour or so the gill was a roaring torrent but we where snug. 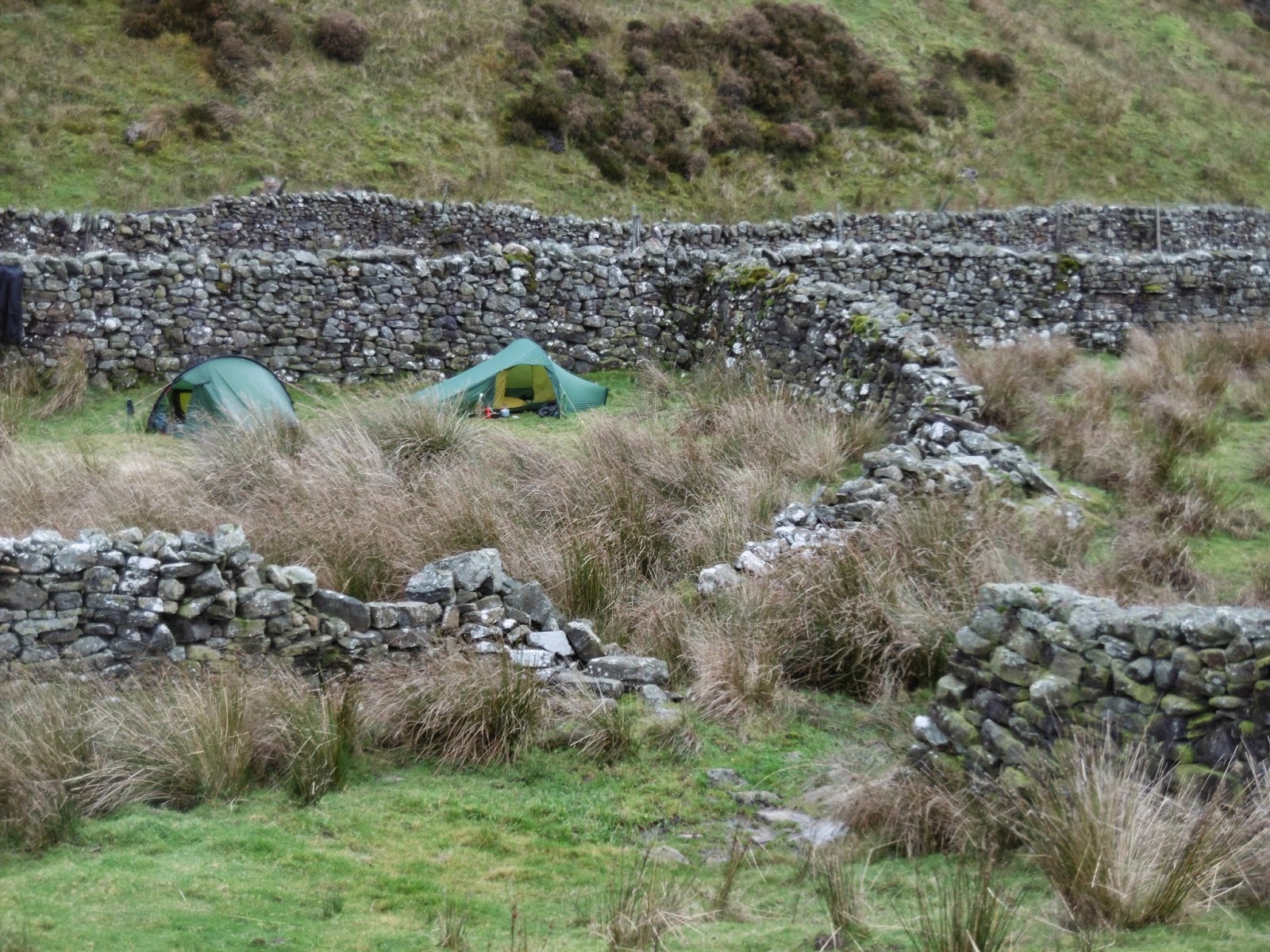 By Saturday morning the storm had passed and all was calm and still. The downside was a heavy dew which saw both tents soaking inside and out. An added factor was that Mike had got wet the previous day. A consensus of opinion saw us agreeing to a day of doing little. Lucky was very much in agreement to this. He loves the tent part of things but so far is not too keen on the wet and windy stuff. Much time was spent in the drinking of tea and pottering around. 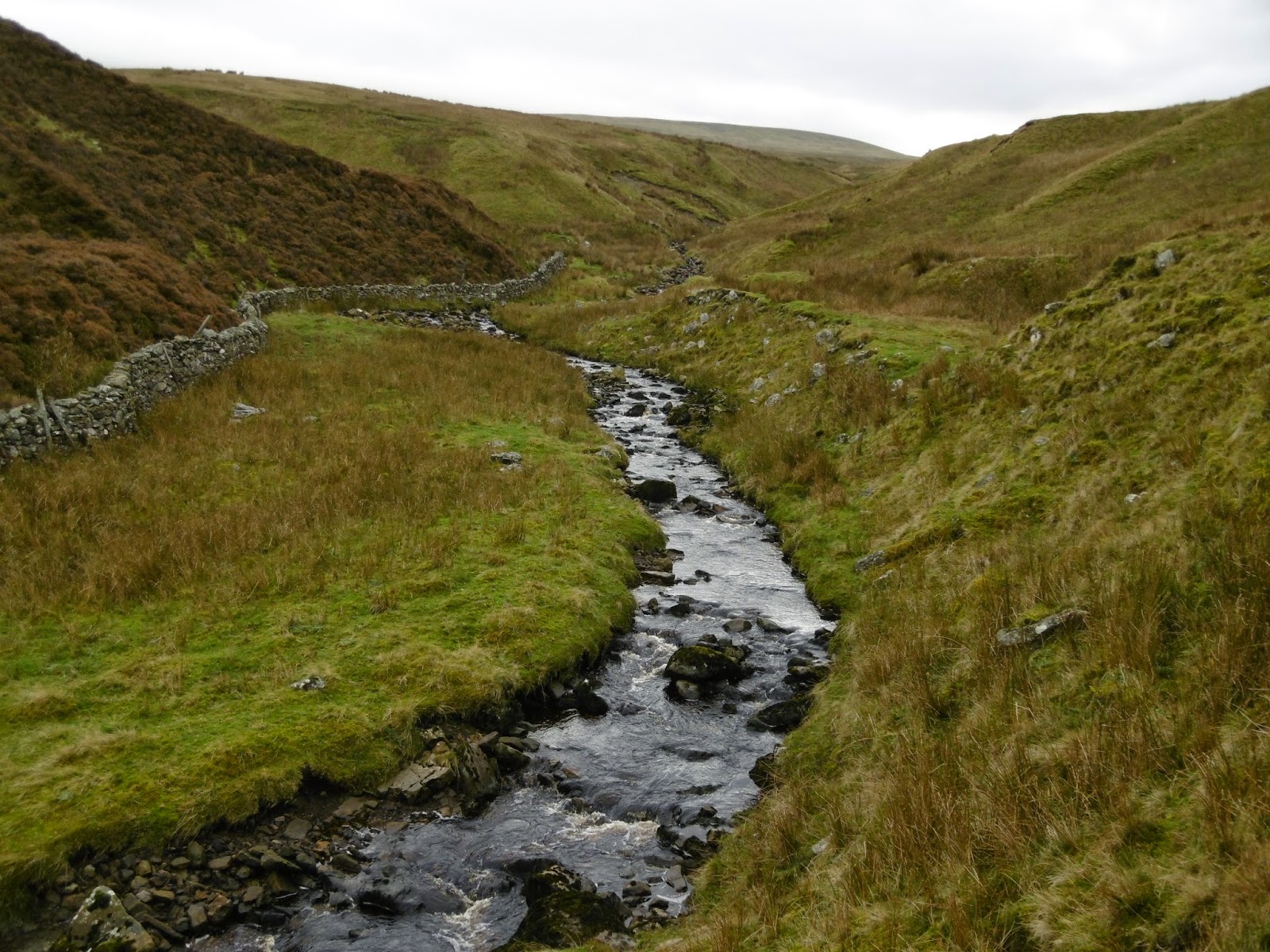 Sunday was a slow meander off in the direction of  the Howgills. Through bridleways, saturated and muddy fields, our way led us toward  Gais Gill. Here we found a quiet little spot well out of the way. Wet tents gradually dried out during the latter part of the afternoon. 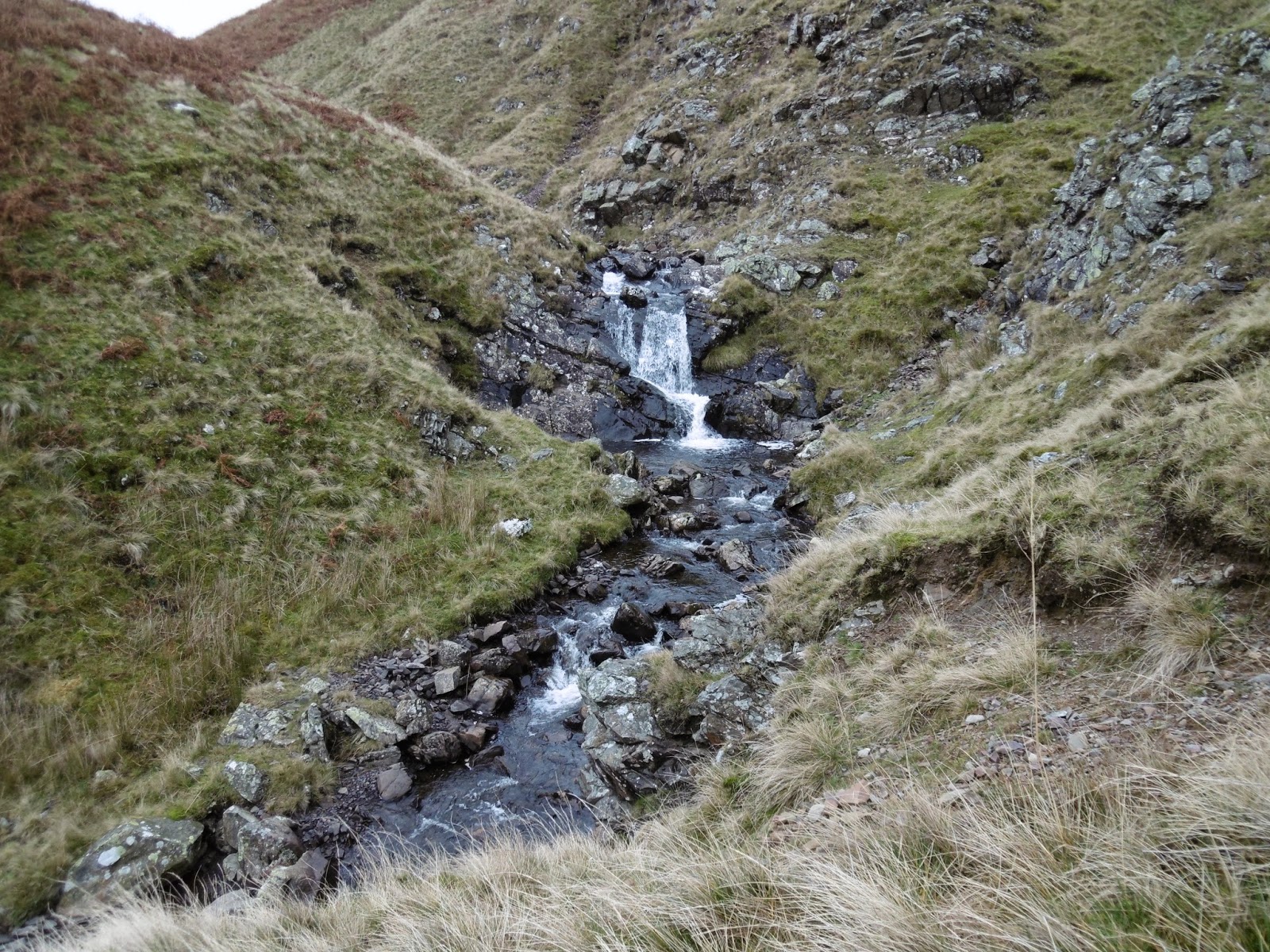 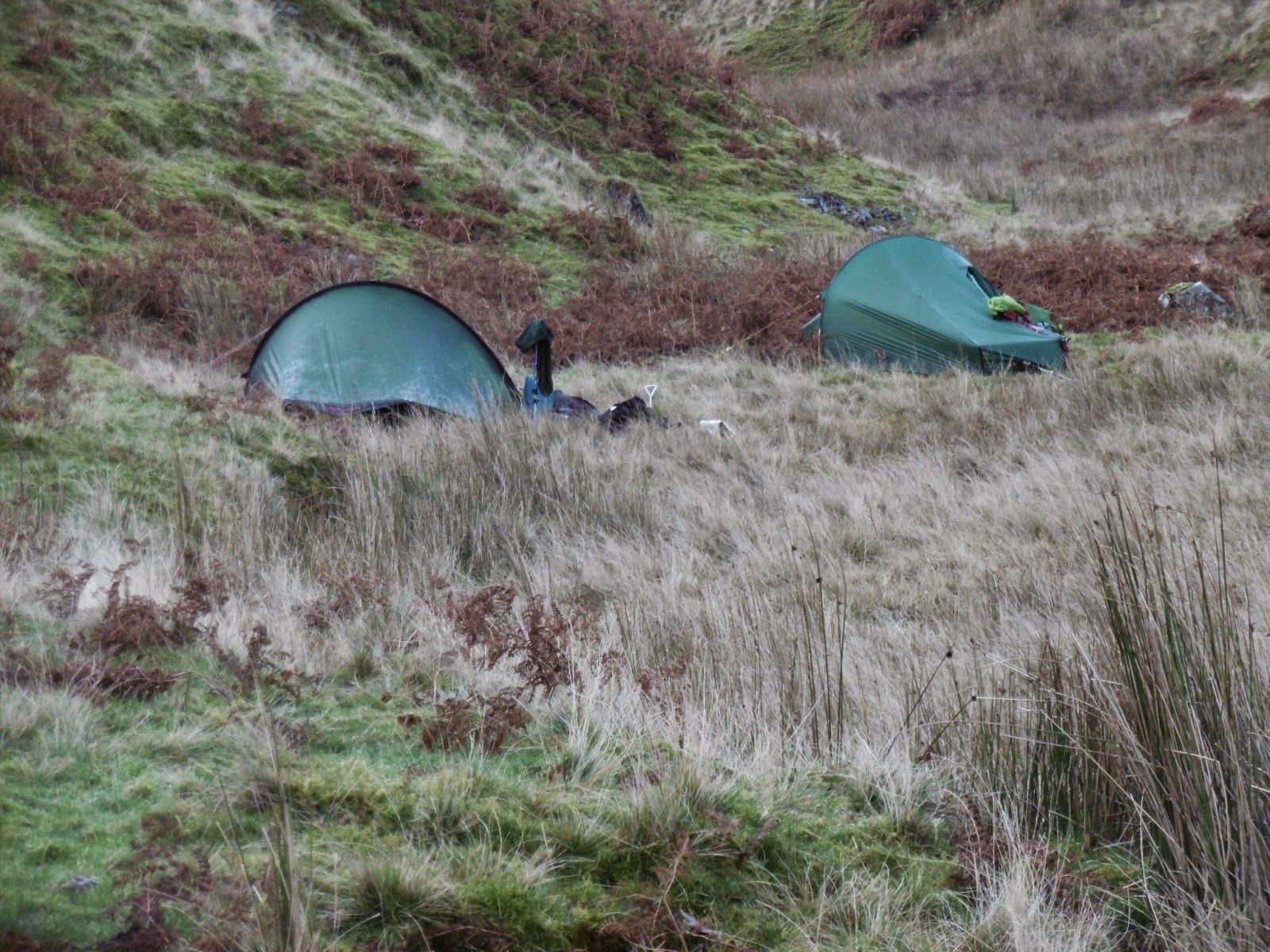 Blustery showers overnight and in to the morning saw us once again making a late start. We had no need to hurry though. A wonderful thing with these Kindle thingies is that several books can be carried without added weight. Very handy when sitting out the weather!
As it was, we got away later that morning and with the tents almost dry. A short walk uphill to join a path that leads up toward Green Bell. For us it was all down hill to Ravenstonedale. From the village we headed over to Smardale Bridge. Camp was made nearby. A few more rain showers rattled through, nothing serious though. A warm night and a heavy dew, thus Tuesday morning saw wet tents being packed away once again. It was a pleasant stroll over to Kirkby Stephen. Here Mick and Lucky departed for home and I headed off to the hostel for a hot shower, clean clothes and a meal.
A relaxed few days and it has given Mike some idea of how much weight  he can carry when taking the pooch backpacking.
Mileage, no idea, not many miles though? That does not detract from the trip though, there is no harm in an occasional slack pack!! 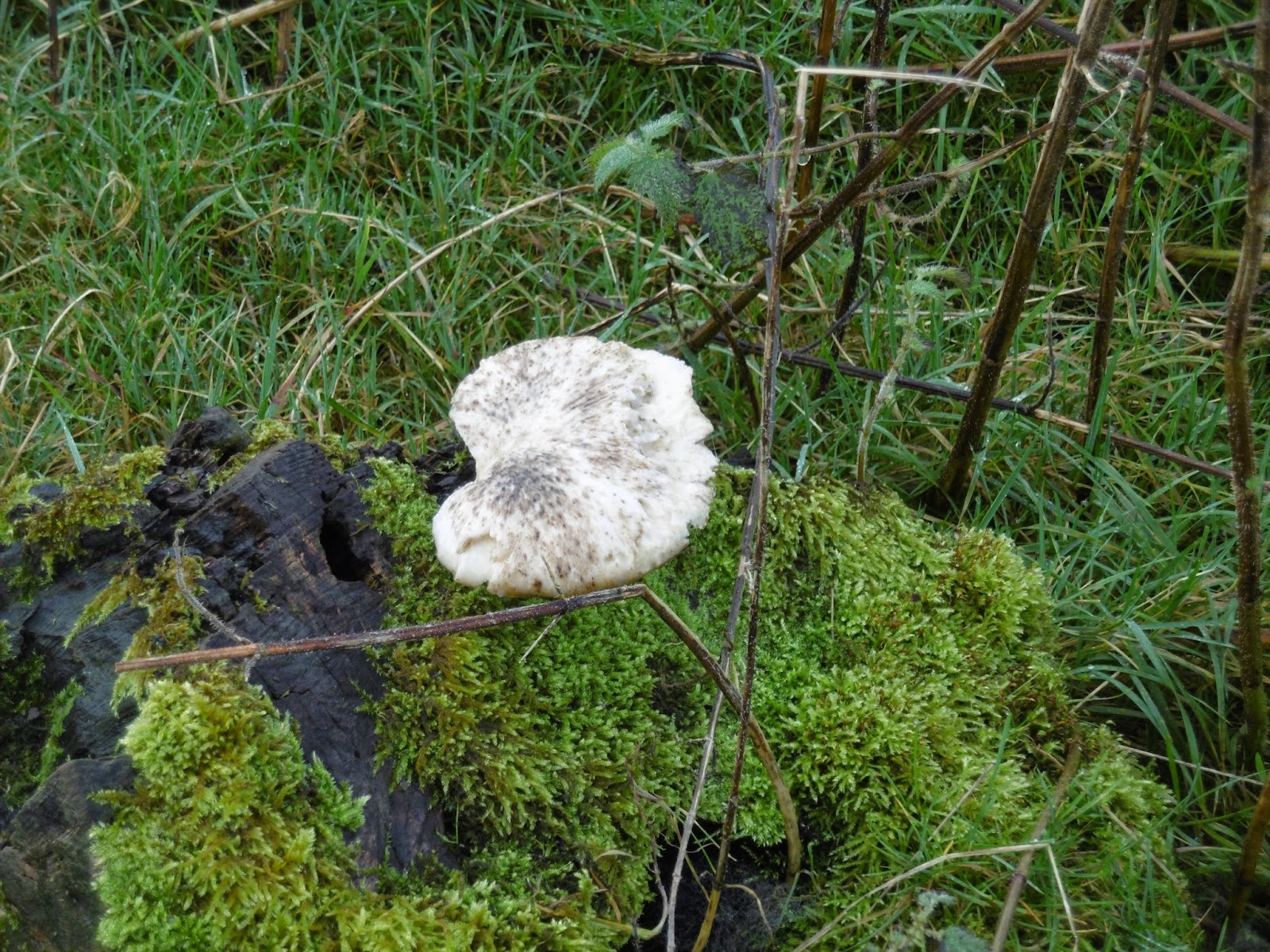 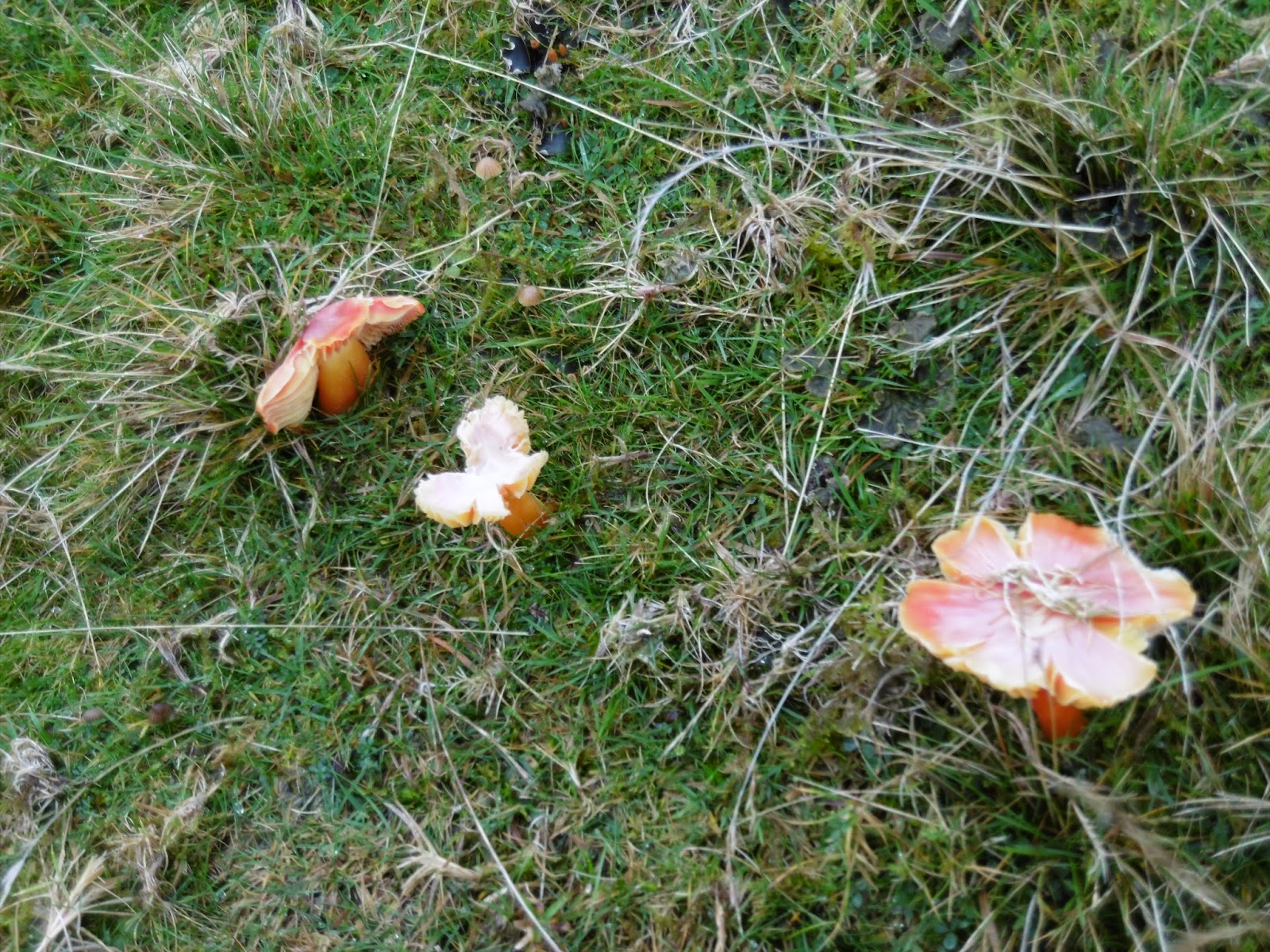 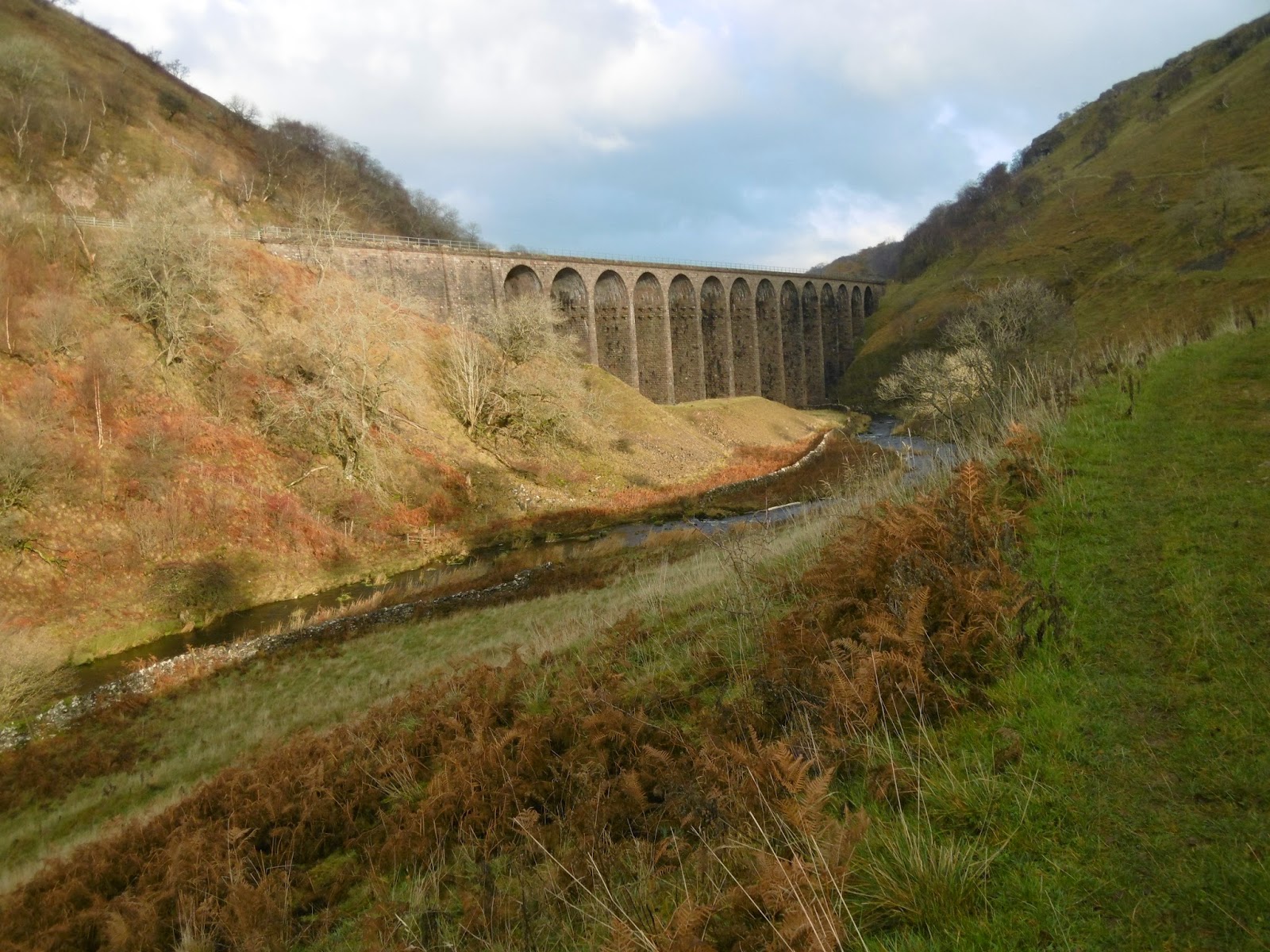