Mike and I had discussed the possibilities of a visit to Glen Callater some time ago. It had been some years since my last trip to that area. Mike had noted a few excellent camping spots on his way through the glen a year or so before. Thus now a plan was made to spend a few days camping at the head of the loch and then proceed on to Glen Shee.
We travelled up on the Monday in somewhat atrocious weather. It was still raining when we set out to walk up to Callater lodge. From there it was another mile or so following the path beside the loch. Thankfully the rain had stopped by the time we had arrived. 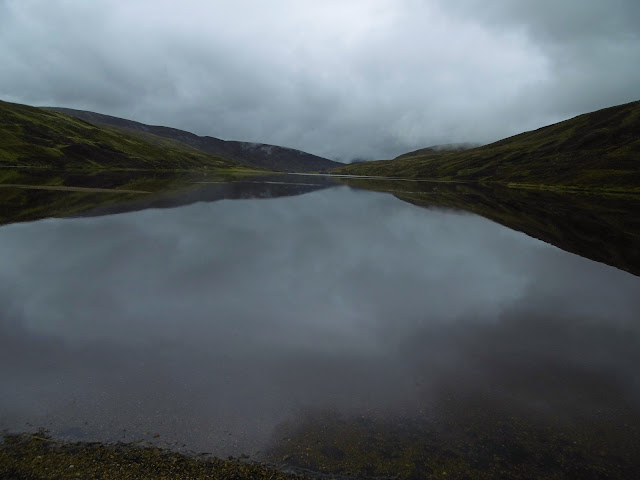 The spot we chose to camp on was quite splendid, offering superb views all around. The deer came visiting during the night. Soft grunts, gentle murmuring and the crunch of hooves on the shingley beach marked their presence. 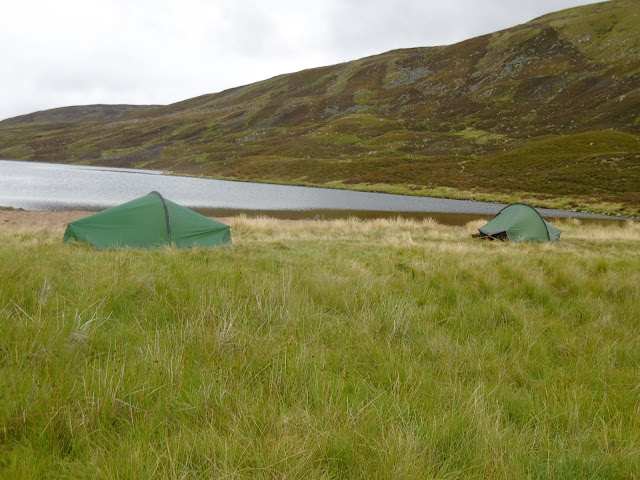 Mike had intended to walk up to one of the tops. Unfortunately the distant sound of vehicles, and shortly after,  the sound of gunfire, curtailed that idea. Instead we spent the day pottering around our immediate area, drinking tea, reading and generally taking it easy. Later I went for a skinny dip in the loch. Lovely, smooth, silky water, but oh my, so shallow. Even way out it barely came up to my chest. A nice wee swim though! 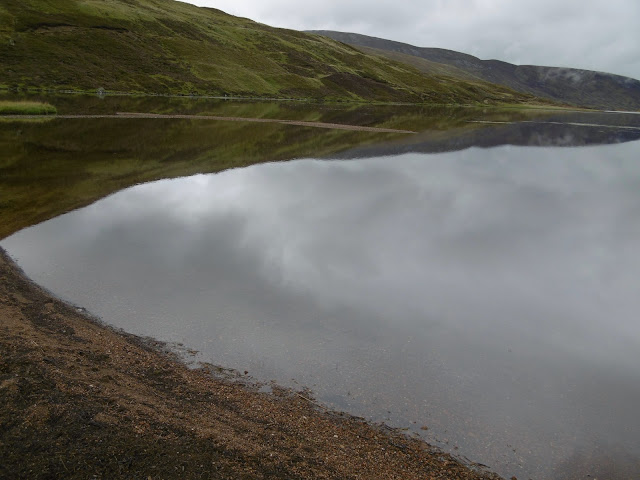 Frustratingly on the Wednesday morning I had been quite ill. With no sign of the grouse shooters, Mike set off to bag his hill. In the meantime I ambled down to the lodge, came back to our camp and after a cup of tea, followed Jock's Road up the glen. 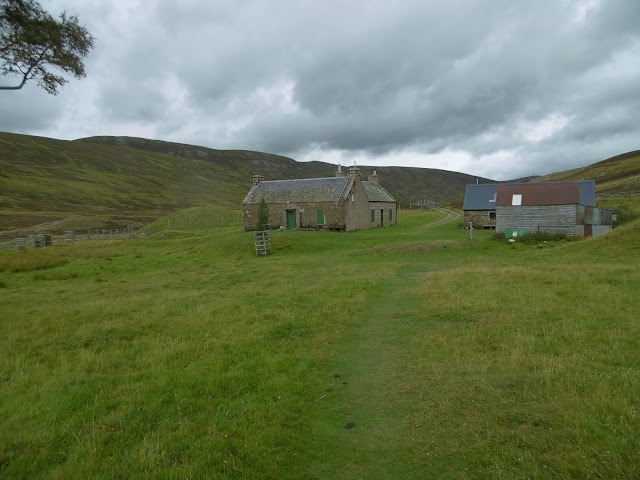 The lodge was shuttered up but the adjacent bothy was clean and tidy. 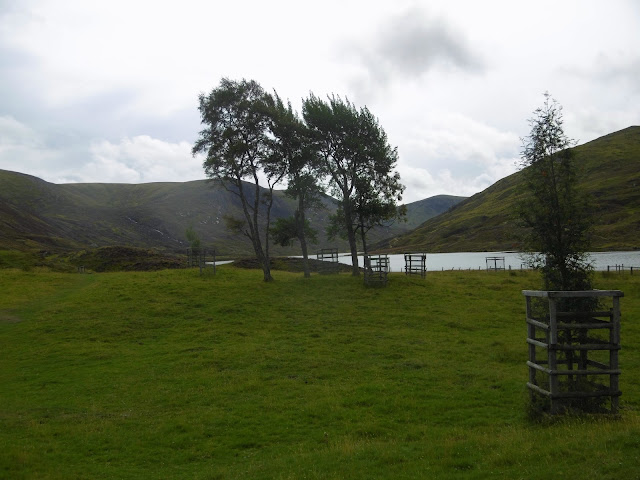 Loch Callater is hemmed in by high hills on both sides. The through route, known as Jock's Road, is an historic right of way used at one time by cattle drovers. It came over from Glen Doll to Braemar. The upper glen is a wide strath that offers many lovely spots for wild camping. Time could be spent up there just pottering and exploring the surrounding area. 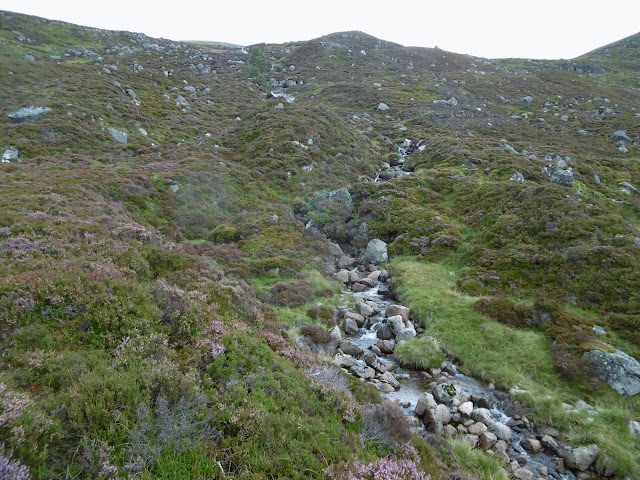 Deer could be seen high on the tops. Mountain hares bounded away as  I walked up the glen.
Low cloud drifted over from time to time. 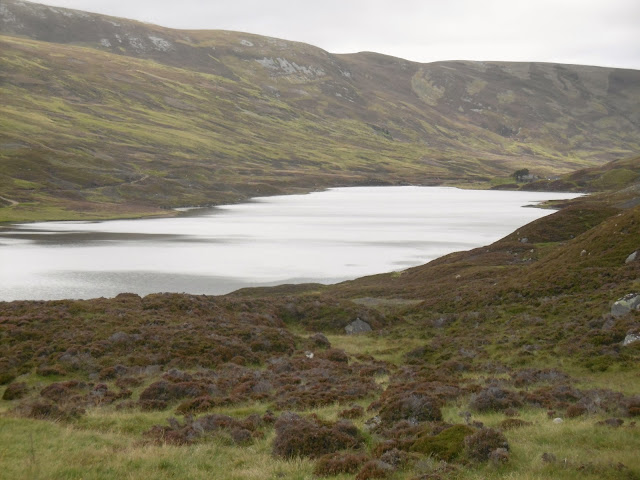 Mike arrived back shortly after me. He was pleased with his trek up the hill. 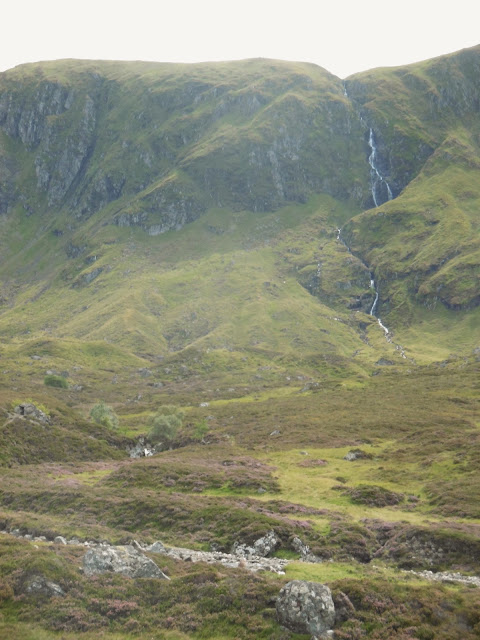 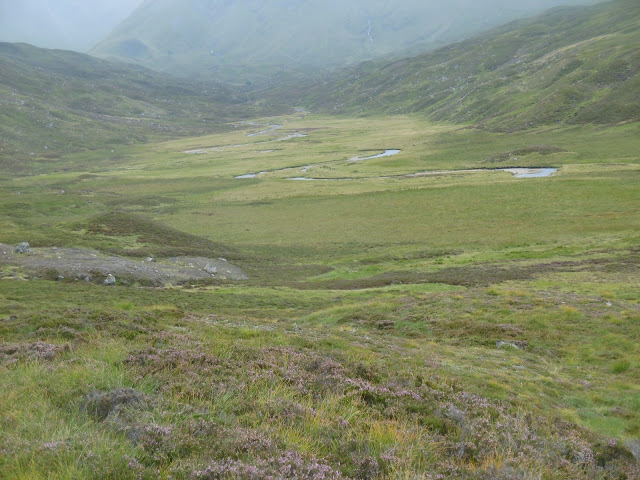 Light mist drifting down the glen 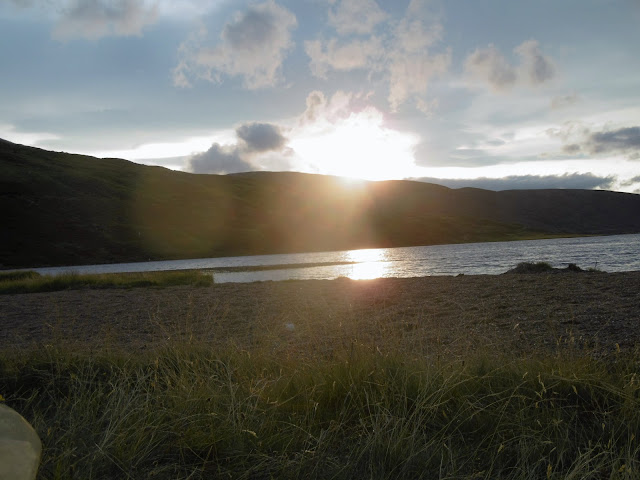 Evening sunset.
We had rain and some gusty wind during the night. By Thursday morning though the weather had cleared. As planned, we packed up and set off to the metropolis of Braemar for a wee bit of shopping. Mike fancied an all  day breakfast while I had visions of poached eggs on toast. Sadly the cafe stopped serving breakfast at twelve and we arrived five minutes too late. Fish and chips were indulged in instead.
Shopping over, we headed over to Glen Shee. The idea was to head up Glen Taitneach and camp. The rain was back so we set off all togged up in waterproofs. Again I had problems, having to stop, take meds and rest for a few moments. No joke in the pouring rain! it is so frustrating and annoying when that happens! Mike called a halt a mile or so short of were we where heading. It was a fine spot to camp though. 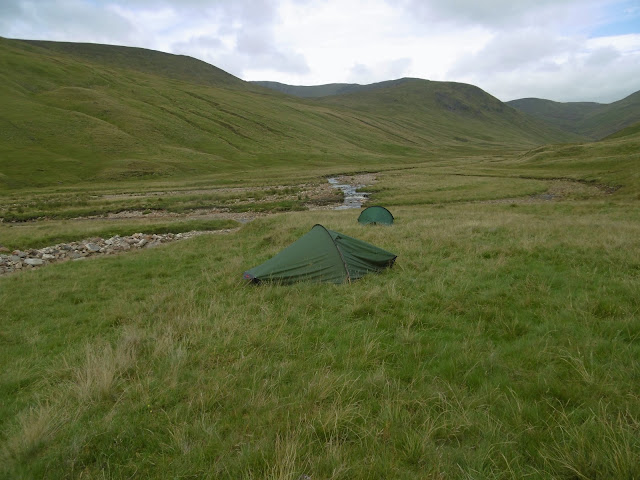 It rained on and off through Thursday night and heavy showers continued through most of Friday. A day spent reading, drinking tea and snoozing. 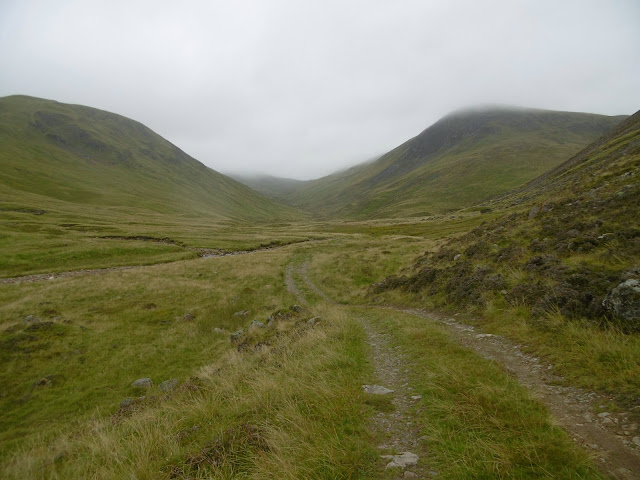 Dark, brooding clouds drifting over the tops.
Saturday proved to be a much better day weather wise. Mike had his eye on a cluster of tops. We set of in high hopes. Initially I felt fine and was looking forward to a good walk. It was not to be though. The first sign of trouble was the increase in my tremor. When it is bad I am unable to use my trekking pole, it hurts, there is no control of the pole and my arm muscles become painful.. Also, my balance was a tad wobbly. With the poles I can counter any wobbly moments. Without them I am in trouble. Also, one side of me felt odd. Unable to keep pace with Mike, I capitulated and let him go on. That is so, so frustrating. 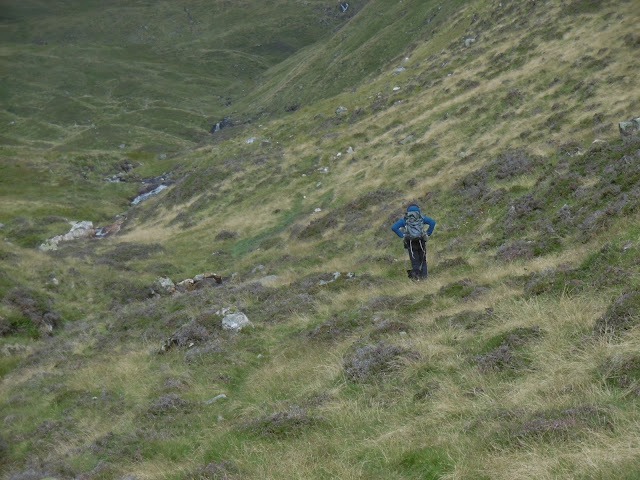 Frustrated and far  from happy, I slowly head back down the glen as Mike headed up.
Taking it easy, I had a look around the area where we had planned to camp. There are some nice spots to  tuck a tent in. 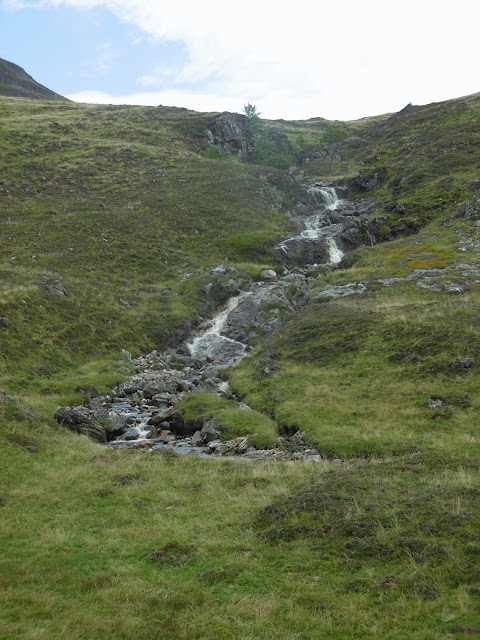 This is Mike's route back down. 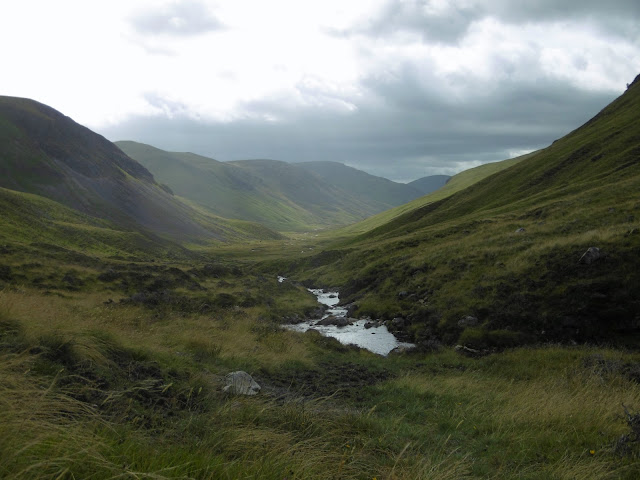 There is a path running up the hill.
Heading back to the tents, I saw the glint of sunlight on a vehicle windscreen. Initially I thought it was the stalker. However, as it drew closer, I saw that it was an almost new, top of the range long wheel based Land Rover. A smartly dressed young lady was driving and all her passengers were clutching cameras. Emblazoned of the side of the landy was the logo, 'The complete'Highland Experience'. Well, each to their own, but I question how one can have such an experience travelling up the glen in a tin box?  To roughly quote Nan Shepherd. One has to experience the mountain in all its seasons. To go in to the mountain, to explore its rocky recesses and corries. To sleep upon the mountain. To take time and get to know it more intimately. 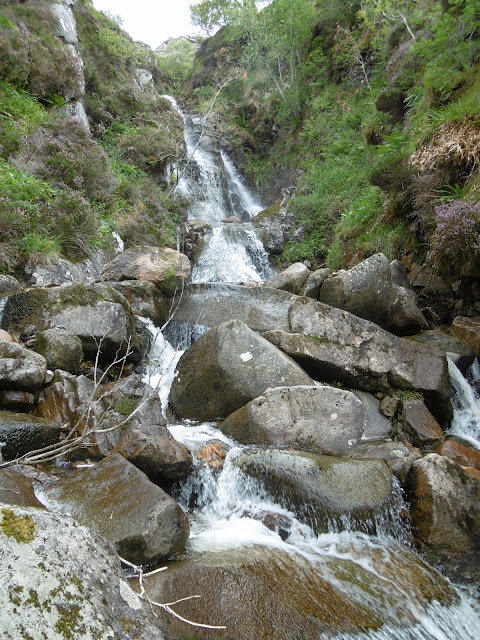 The thing that annoyed me, was when the land rover came heading back down again. We were camped quite close to the track and I was standing by the tents when the vehicle stopped, the windows came down, a battery of cameras appeared, all pointed at me and the tents. Photos taken, the windows went up and the truck headed off again. How rude, they could have asked if it was ok! 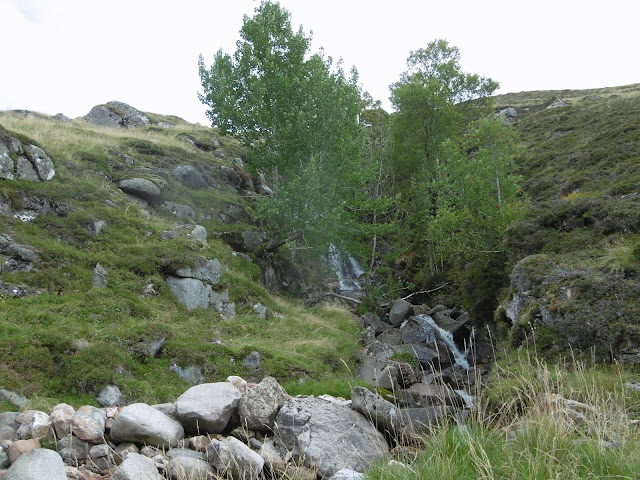 Not in the best of moods, I sat down outside the tent with a cup of tea. Glancing about, I spotted three red deer hinds heading down the hill behind the tents. Keeping still, I watched as they forded the river and came close by. Three heads stared in my direction, ears pointing forward, twitching, checking me out. Obviously not seeing me as a threat, the deer began to graze. Always though keeping a close eye on me. Finally something spooked them and they took off up the hill in that long, gangly gaite that deer have. Five minutes later Mike appeared with Lucky. Obviously the deer had heard them and rapidly took off. Later I plodded slowly up to the waterfall high on the hillside. A narrow cleft with a cascading waterfall. Beyond a jumble of rock and boulder there was a delightful rock pool complete with a small grassy patch beside it. An idyllic spot for a skinny dip. Not enough room to swim but space enough to have a luxurious wee dip. 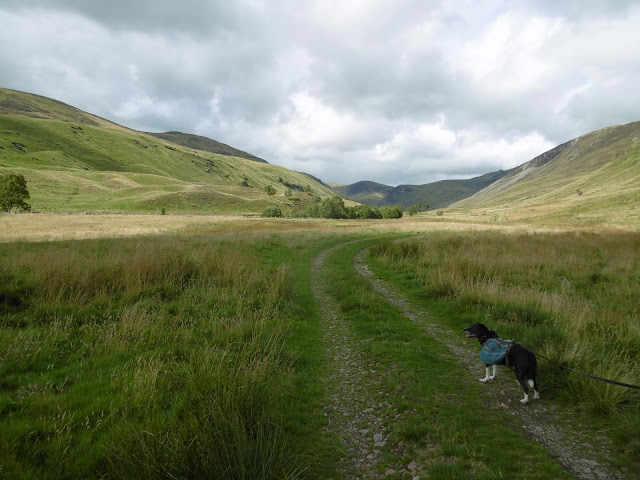 A wide open glen.
It rained on and off during the night but had eased by morning. Mind, we still had wet tents to pack! It had been a good week, but not without it disappointments. 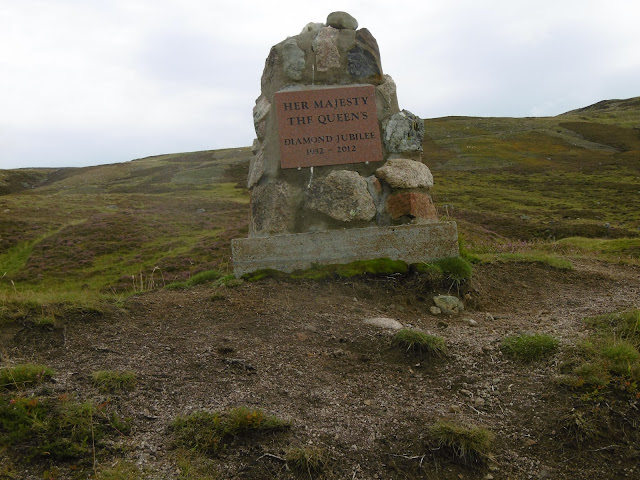 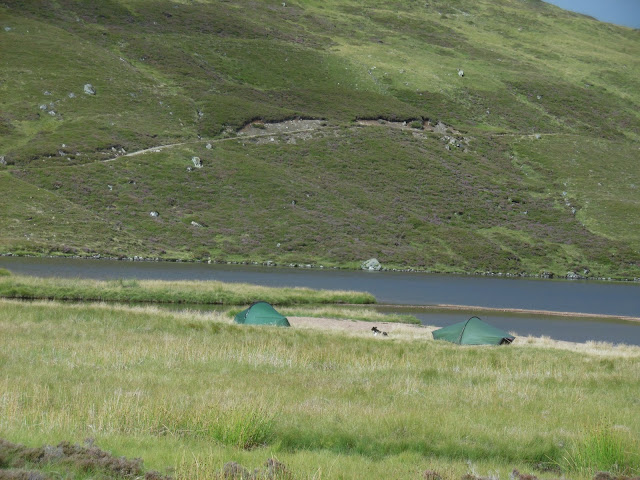 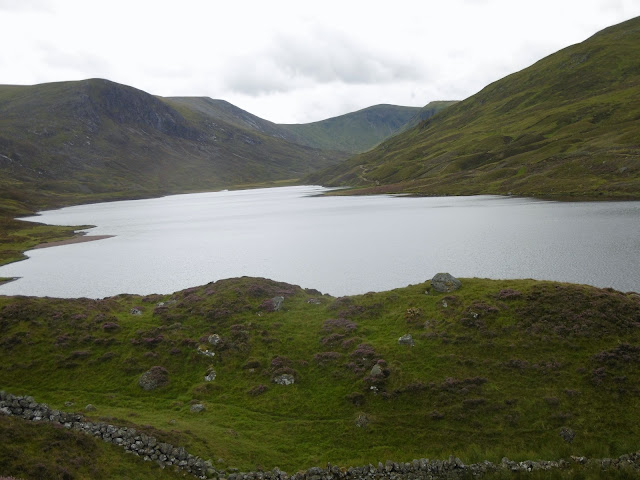 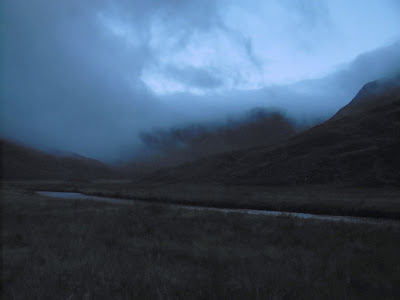 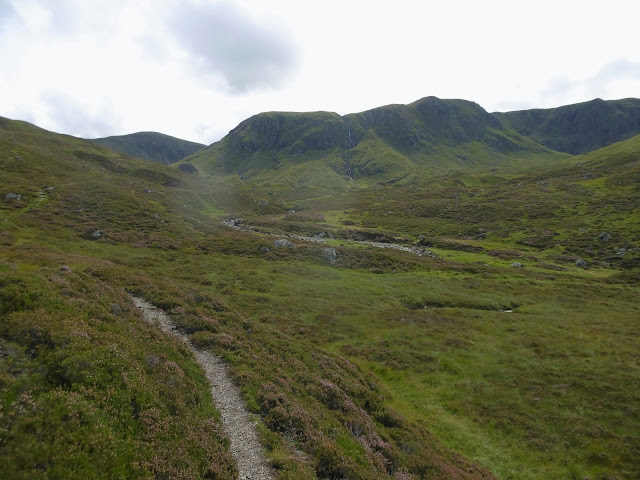 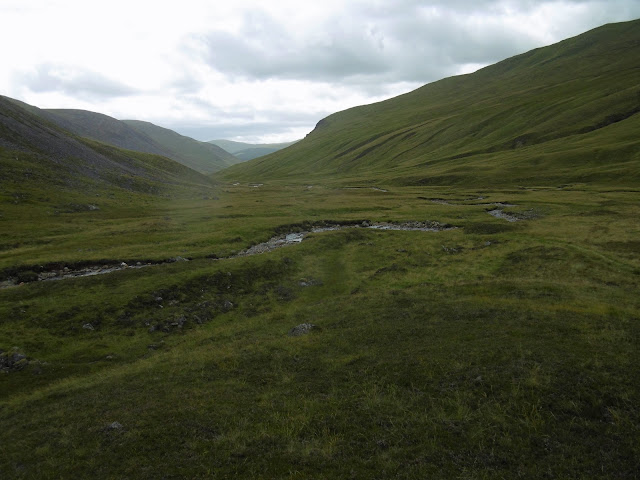