What did you do on the weekend?

It was that time of the year once more. The North East Skinny dip loomed large on the horizon. This is a charity event held on or near the Autumnal Equinox. Since its concept the dip has raised many thousands of pounds for the mental health charity, Mind.
Mike collected me on the Friday afternoon. Again, this has become a regular thing we do. Travelling up to Ross Back Sands on the Friday, staying overnight on the beach and spending the Saturday having a few pre dip swims and such. Come the Saturday afternoon and we head over to Druridge Bay, where the dip will be held. Camping is permitted for those partaking of the dip. 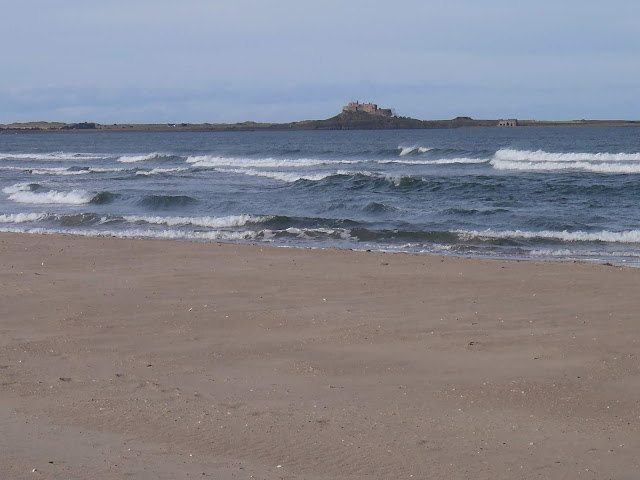 A heavy shower of rain hit us we set up our beach shelter, ( camping on the beach not permitted!) Soon we were snugly settled in with a cuppa. A heavy surf boomed on the beach. 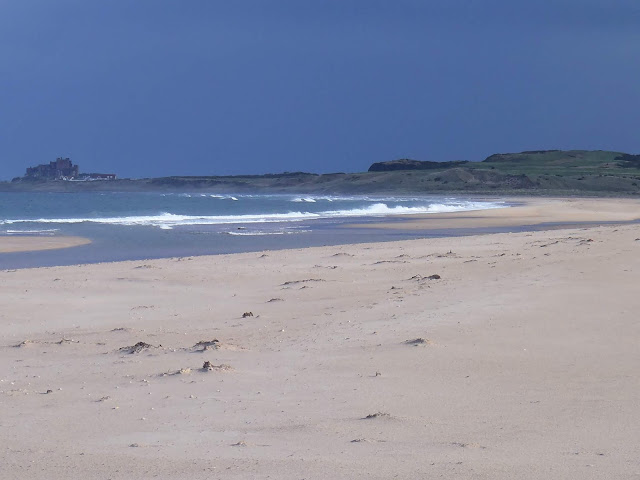 Early evening saw the weather clearing and we were treated to a lovely sunset. 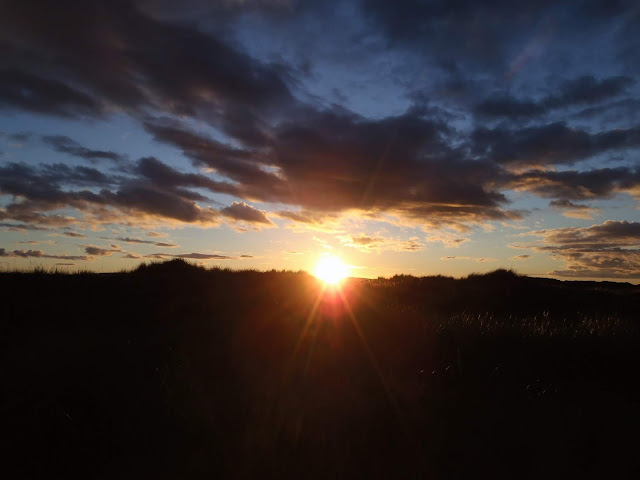 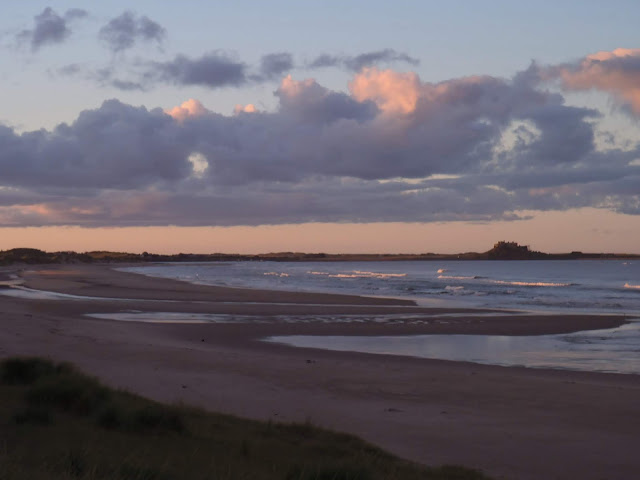 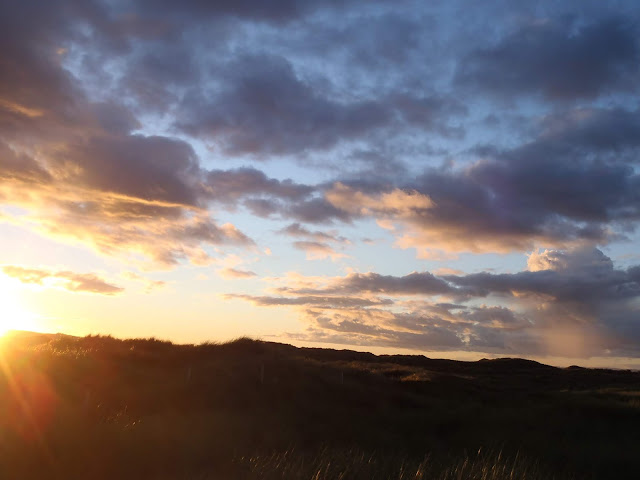 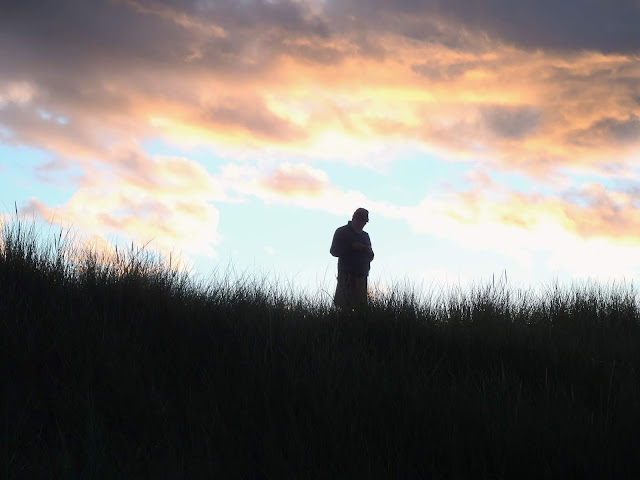 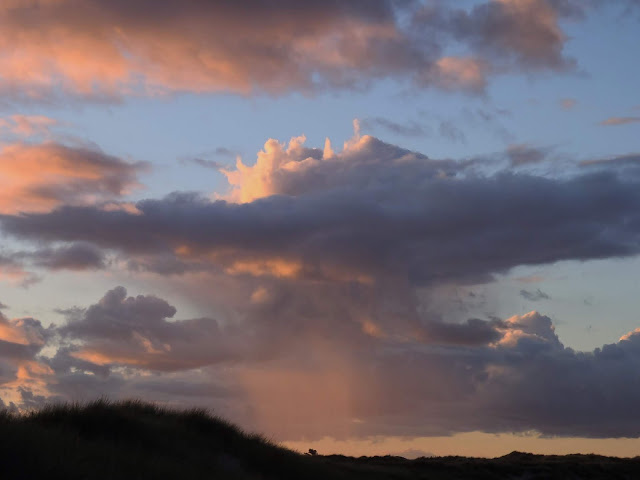 Cloud  formations.
As we settled down for the evening, skeins of geese flew overhead, their haunting cries filling the air. Later the seals were heard singing their mournful songs. The sky was clear and the almost full moon shone brightly overhead.
Waking early, the morning felt chilly, however, the sky was tinged crimson with the early morning light. 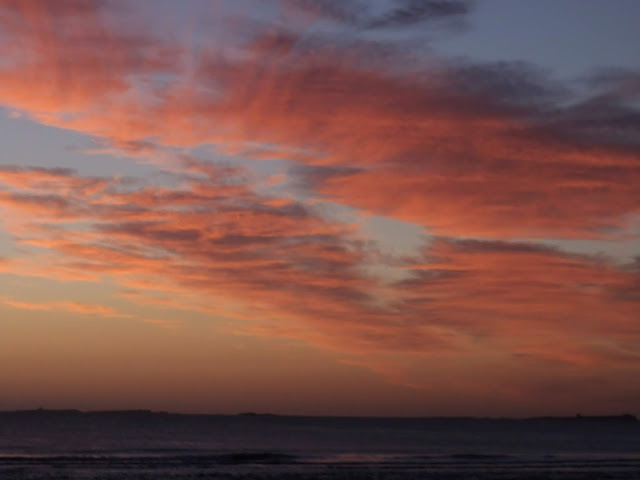 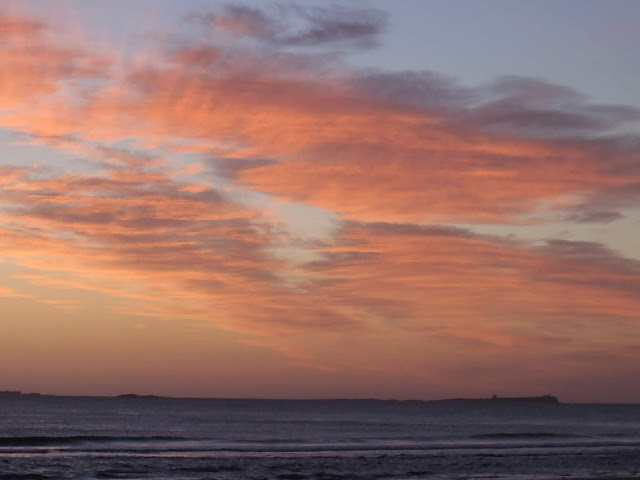 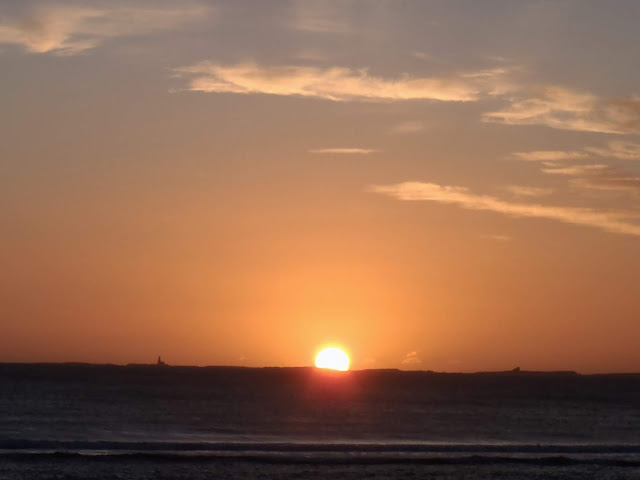 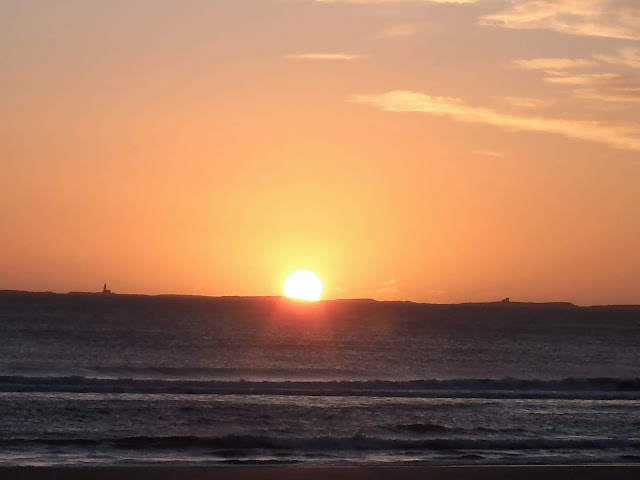 Sunrise
Saturday morning was a lazy one. With the tide way out and a nithering wind blowing down the beach we decided to wait. Finally though I put on my cossy and headed seaward.. There was a heavy surf running. What I did find disconcerting though was the jumbled sea state Waves came in from several directions, I felt myself being pulled and pushed by confusing currents.  It did not feel good and I came out for safety. Mike went for a couple of dips but kept to the shallows and did not linger long. 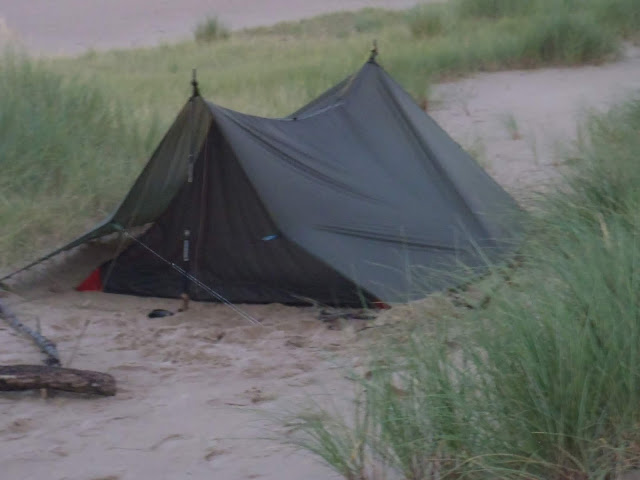 Our abode Friday night.
Saturday afternoon we headed down to Druridge bay and set up camp. The skinny dip is a well run event. A band of volunteers work hard behind the scenes to ensure everything runs smoothly on the day. and  we arrived  to be greeted by some of these smiling folk.
Disappointed in not managing a swim earlier, we opted to try an evening swim at Druridge bay. Large waves were still rolling in but conditions were much better and we had an enjoyable dip and swim.
Sunday morning saw us awake by four fifty, in the morning and having a cup of tea.! Actually, I never sleep well the night before the dip. Nerves and old memories seem to crowd my mind. By around five thirty we were  following the throng heading to the beach. This year we were serenaded by a quartet of drummers and entertained by a fire dancer. 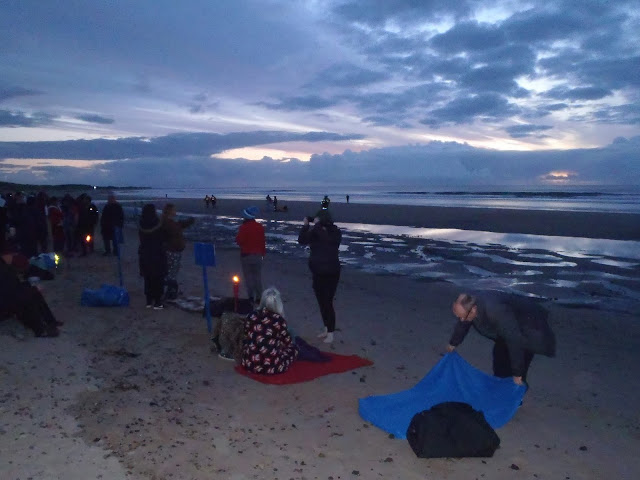 Pre swim and folk begin to gather.
It felt chilly on the beach. This is always the worst time for me. The waiting, the chill gradually seeps in and the body gradually loses any heat it had. My feet suffer from poor circulation and they slowly become numb. Mike is wearing his 'not a onesie' and he looks quite calm and collected. 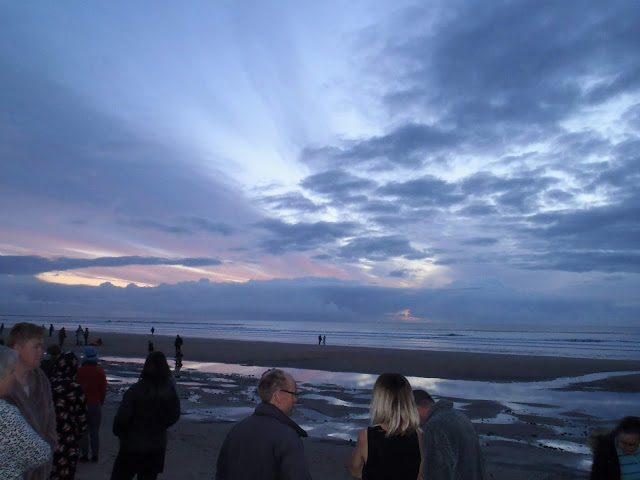 Early morning skies.
As the beach fills with people, folk bustle about trying to find a spot for their belongings. A voice calls out, the organiser of the event welcomes everyone and thanks one and all for coming. She leads us in a few jumping up and down exercises to stimulate the blood? Around me folk are quietly shedding their clothing. There is a frisson of nervous anticipation, of excitement! The new day is dawning.  Suddenly a great cry goes up, any remaining clothes are rapidly shed and a great mass of naked bodies hurtle seawards. Old, young, fat, thin, it matters not. Yells, shrieks, screams, rent the early morning air as we plunge in to the rolling waves. As I wade in, it is amazing to see the grins and beaming faces, to hear the laughter of the people around me. It certainly is a joyful occasion.
To my own surprise, I find myself out further than intended. There is a heavy swell running and I find myself rising and falling in breaking rollers. Finally, realising I am getting cold, it is time to head out. There was obviously a southerly drift, as I came out it took a moment or two to get my bearings. Mike was already out and dressed. It was a shivery, fumbly affair getting my swim robe on.
The walk back to the tent was a long one and we were decidedly chilled. However, wrapped in sleeping bags and enjoying a hot cup of tea and a bacon roll, we soon revived. Later we packed up and headed out for breakfast. A walk up the Druridge bay beach completed our day. 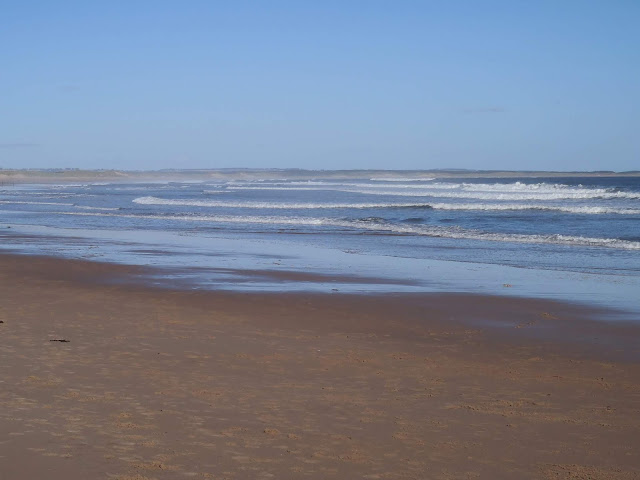 Druridge Bay.
We heard later that six hundred plus people had attended the event. Certainly a weekend with a difference!
Posted by Dawn at Tuesday, September 25, 2018